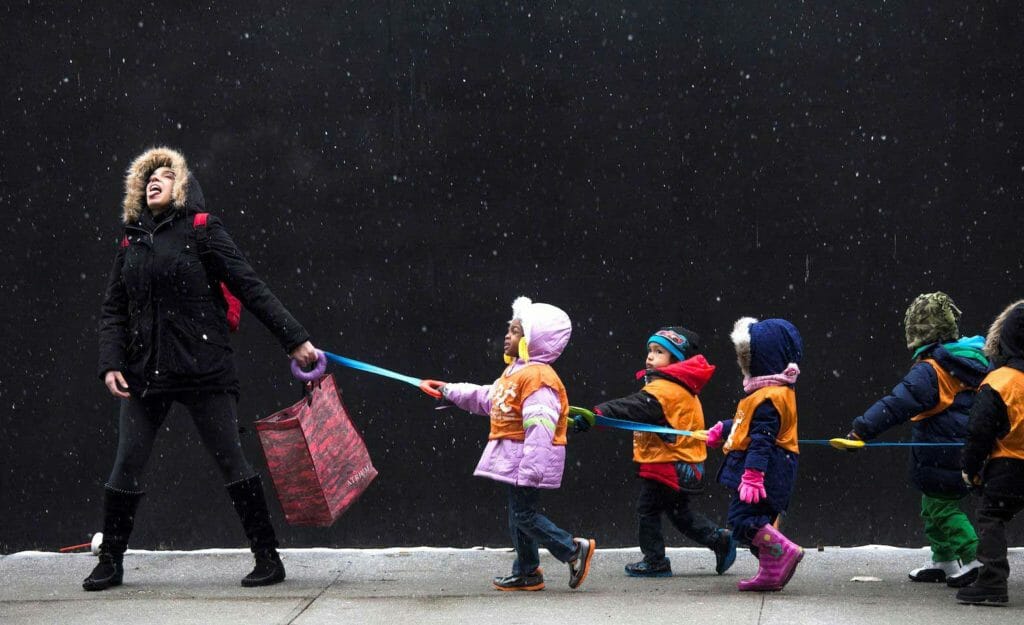 A schoolteacher, who wished to stay unidentified, attempts to catch snowflakes while leading her students to a library from school in the Harlem neighborhood, located in the Manhattan borough of New York on January 10, 2014. REUTERS/Adrees Latif/File Photo

The White House’s top economic advisers have advocated that the return of women, and particularly mothers, to the workforce is key to economic recovery from the coronavirus pandemic and faster growth for years to come.

The U.S. labor market was stronger before the pandemic, but millions of Americans still have not returned to work after becoming unemployed during the crisis.

Determining exactly how many mothers would join the workforce if free schooling became available on a voluntary basis for all 3 and 4-year-olds is difficult. But the past may offer some clues.

Kindergarten, or education for children who are generally 5 years old, became a bigger part of the public school system over the first half of the 20th century; however, it wasn’t until the 1980s that it became free or subsidized in every state.

Single mothers who had 5-year-olds and no younger children saw the largest employment gains, researchers say.

It is “indisputable” that free pre-K will provide an incentive for a parent with a child of the right age, who is not working now, to start working, said Elizabeth Cascio, an economics professor at Dartmouth College who studied the labor market effects of expansions of kindergarten and preschool programs. “It is just a matter of what degree.”

Roughly half of 3- to 4-year-olds in the United States, or about 4 million kids, were enrolled in school in 2019, according to the National Center for Education Statistics.

Democrats hope for a Senate vote on the bill by Christmas.

Previously, when U.S. states rolled out public kindergarten programs between 1950 and 1990, about 40% of single moms with 5-year-olds and no younger children entered the workforce after their child enrolled in school, Cascio found.

Married mothers, and those with children younger than age 5, didn’t see a significant change in employment, Cascio found.

The labor force participation rate for women in the prime working ages of 25 to 54 rose from 42% in 1960 to a peak of 77.3% in 2000, but has dropped slightly since then. Some mothers say public preschool would make it easier for them to get back to work.

Ellen Reynolds, 39, quit her job as a dental assistant in Savannah, Georgia, in the summer of 2019, shortly before giving birth to her son. She and her husband are considering enrolling him in a private preschool program when he turns 3 years old next year, but they cost $150 to $400 a week – or as much as two-thirds of her previous paycheck, said Reynolds.

A free, full-day preschool option would make it financially possible for her to return to work next year, she said. “If I’m going to be away from my family, I want it to be worth my while,” she said.

One of the more dramatic shifts took place in Washington, D.C., which began offering two years of full-day preschool in 2009.

Over the next several years, preschool enrollment rose to 88% of 4-year-olds in 2017 from 68% in 2008. Enrollment of 3-year-olds doubled to 66%, according to the National Institute for Early Education Research.

The share of mothers with at least one child under age 5 in the district who were either working or looking for work, known as the labor force participation rate, rose to 76.4% in 2016 from about 65% before the expansion, with 10 percentage points of the increase attributed to the preschool expansion, according to an analysis by Rasheed Malik, director of early childhood policy for the Center for American Progress, a liberal nonprofit group in Washington.

“By reducing the financial stress and the psychological stress of finding and keeping child care, it could make it a lot easier for moms” to work outside the home, Malik said.

Labor effects were more modest in Oklahoma and Georgia, which introduced universal preschool programs in the late 1990s, research by Cascio and Diane Whitmore Schanzenbach of Northwestern University shows.

“Although these policies have small long-run GDP effects, they improve (the) welfare of specific demographic subgroups,” they wrote.

Areas that do not offer free full-day programs or that have lower living expenses where families can manage on a single paycheck could see less impact, Malik said.

Republican-led states may decide to opt out of the expansion, potentially locking out many children.