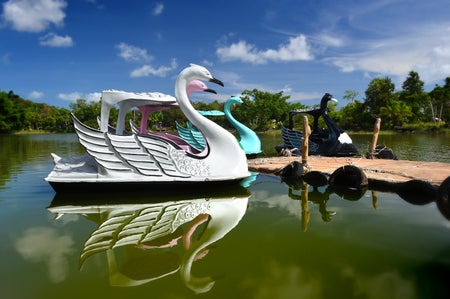 Local firefighters got a surprise call to help a man under the influence of drugs in Orlando, Florida, after the guy got stranded in a fountain on Friday.

WFTV first reported that the firefighters responded to a call from a concerned citizen, who heard a man shouting for help. It turned out that the man was stranded in Lake Eola’s Linton E. Allen Memorial Fountain, in a swan-shaped paddle boat which was allegedly stolen.

The man, identified as 36-year-old Keith Thurston, was rescued and taken to the hospital for treatment, The Orlando Sentinel reported.

Upon investigation of the police, they found that Thurston had MDMA pills (popularly known as Molly or Ecstasy) in his system when the incident happened.

“Before Thurston was transported [to the hospital], he explained he ingested a large quantity of Molly (MDMA) and wanted to be with the swans because they didn’t judge him,” officers wrote in their incident report.

But Thurston got into the boat forgetting to tie the vessel; thus, he and the boat floated away into the fountain. Police are now filing charges against Thurston, who is yet to be released. Katrina Hallare/JB