A federal judge on Tuesday blocked the last of the Biden administration’s COVID-19 vaccine mandates for businesses, saying the government exceeded its authority with a requirement that millions of employees of federal contractors be inoculated.

The ruling was the latest setback for President Joe Biden, a Democrat, who announced a series of measures in September aimed at increasing vaccination rates to fight the pandemic that continues to kill more than 1,000 Americans daily.

“Abuse of power by the Biden administration has been stopped cold again,” Republican South Carolina Attorney General Alan Wilson, who joined the lawsuit, said in a statement.

U.S. District Judge Stan Baker in Savannah, Georgia, said Congress did not clearly authorize the president to use procurement to impose a vaccine requirement on contractors that will have “vast economic and political significance.” 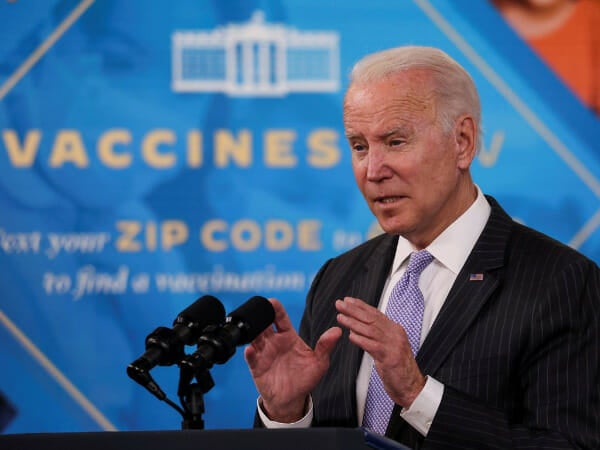 U.S. President Joe Biden delivers remarks on the authorization of the coronavirus disease (COVID-19) vaccine for kids ages 5 to 11, during a speech in the Eisenhower Executive Office Building’s South Court Auditorium at the White House in Washington, U.S., November 3, 2021. REUTERS/Evelyn Hockstein/File Photo

The lawsuit was filed by the states of Georgia, Alabama, Indiana, Kansas, South Carolina, Utah and West Virginia as well as a trade group for building contractors.

The rule required contractors to have employees fully vaccinated by Jan. 18. Biden’s executive order applied to newly awarded contracts, although the government has been asking suppliers to agree to amend existing contracts to insert the vaccine requirement.

The contractor requirement was meant to improve efficiency among government suppliers by reducing outbreaks and was far-reaching, applying even to those working remotely.

Tuesday’s ruling by Baker, an appointee of President Donald Trump, shut down temporarily the last remaining business mandates that Biden had announced, as courts have found the government overstepped its authority in imposing the rules.

The litigation will likely continue for months and could revive the rules, which covered nearly 100 million workers, although some 83% of U.S. adults have received at least one shot, according to government data.

A federal appeals court in New Orleans last month shut down a requirement that businesses with at least 100 employees get workers vaccinated or have them tested weekly.

A requirement that most healthcare workers get vaccinated was blocked last week.

The pandemic has killed more than 780,000 Americans and slowed economic growth and snarled supply chains.

Mandatory vaccination has become an increasingly popular tool in fighting the pandemic and has boosted U.S. vaccination rates.

Although the Biden administration’s plans have been frustrated in court, judges have upheld mandates by private employers, universities and state and local governments.