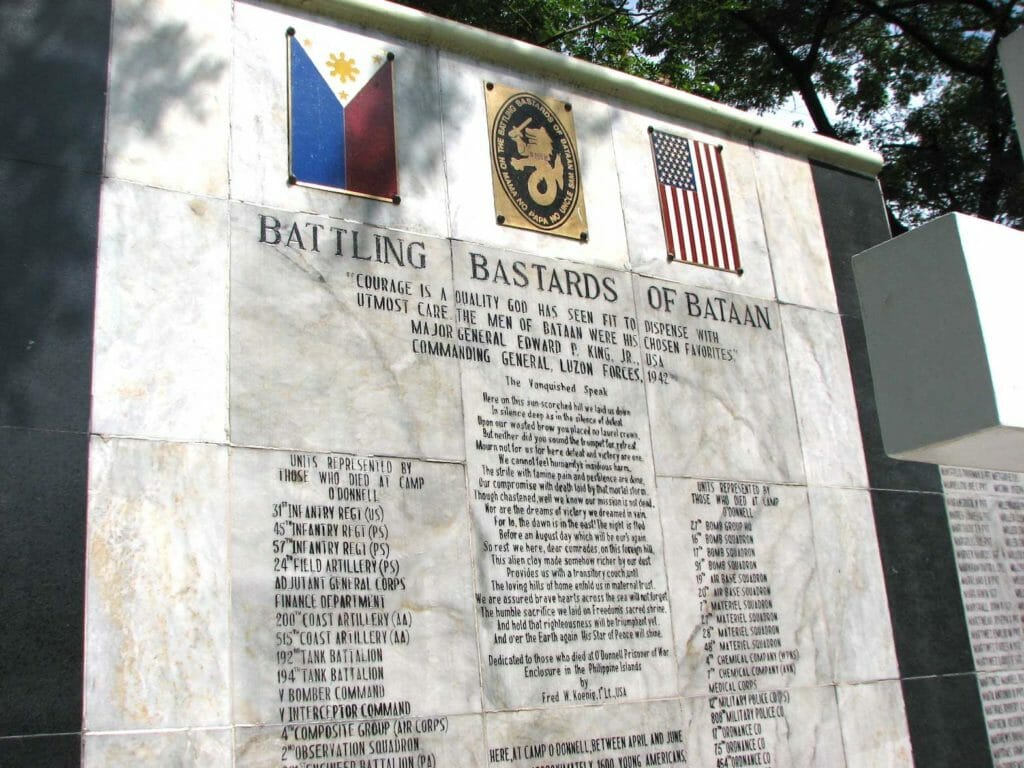 The author’s cousin was among US and Filipino soldiers who died after the surrender of Bataan. CONTRIBUTED

December 7, 2021 marks the 80th Anniversary of the attacked on Pearl Harbor in the Hawaiian Islands by the Imperial Japanese Navy. Pearl Harbor Day was truly a day of infamy. The men who served at Pearl Harbor and their comrades who gave the ultimate sacrifice will never be forgotten.

What is sometimes forgotten on this anniversary is that the American and Filipino forces in the Philippines were attacked only eight hours after the raid on Pearl Harbor.  When the time difference between Manila and Honolulu is calculated, the attack on the Philippines by Imperial Japan was commenced on Dec. 8, 1941.

This 80th Anniversary on Dec. 8, 2021 deserves as much respect and commemoration as Pearl Harbor Day. Unlike the attack on the Hawaiian Islands, the Filipinos and Americans had to endure over three years of infamy. The men who served in the Philippines and their comrades who gave the ultimate sacrifice will never be forgotten.

Shortly after Dec. 8, 1941, the situation in the Philippines was bleak for the American and Filipino forces. Imperial Japan had destroyed most of the American air force and had landed invasion troops on the Island of Luzon. Due to the devastation in Hawaii, Pearl Harbor was unable to bring reinforcements and resupply to the Philippines. Also, the seas lanes from Honolulu to Manila were primarily under Japanese control.

The combined regular US Army in the Philippines, Philippine Scouts, and the Philippine Commonwealth Army were unable to stop the Japanese invasion at the beaches. The joint troops were forced to retreat to the Bataan Peninsula and the Island of Corregidor (at the entrance to Manila Bay) and prepare for a Japanese attack.

Unfortunately, senior American military leadership in the Philippines neglected to transfer an adequate supply of food, medicine, and other provisions to Bataan. Over time, this mistake proved to be very expensive. Supplies from Hawaii and other locations were delivered by submarines and other covert means to Bataan, but it was not enough.

When the Imperial Japanese Army attacked the combined American and Filipino troops on Bataan in early January 1942, it was a significant defeat for the veteran Japanese Army. After several futile advances, General Homma halted his soldiers. He was ignominiously forced to regroup, resupply, and wait for reinforcements. The Japanese timetable of invasion in the Pacific had hit a wall.

During the hiatus in fighting, the American and Filipino troops were devastated by tropical diseases and starvation. Food rations were drastically reduced and malaria was rampant. The Filipino and American soldiers were quickly overwhelmed when Imperial Japan resumed the fighting. Starvation, sickness and lack of planning, not the Imperial Japanese Army, defeated the fighting men of Bataan.

The infamous Bataan Death March followed the surrender of American and Filipino forces. The severely weakened American and Filipino soldiers were forced to march approximately 60 miles to San Fernando, Pampanga Province. Many atrocities were committed by Japanese soldiers against the prisoners of war (POWs) along the march.

Once the POWs reached San Fernando, they were packed like livestock into crowded train cars. The appalling train ride ended at Capas, Tarlac Province. The POWs were once again forced to march to a former Philippine Commonwealth Army training base called Camp O’Donnell. Many of men who had survived the horrific death march died shortly after arriving at the camp. They were buried in mass graves.

For many years, I had researched the fighting in the Philippines during the early months of World War II and the subsequent Japanese occupation of the Philippines. As a historian, I had always attempted to be objective in my analysis. However, the severe brutality and ruthlessness by the Imperial Japanese Army made it difficult to be impartial.

About 15 years ago, my objectivity was shattered. During my research, I had discovered that a distant cousin, named Charles Flake, had served and unfortunately died in the Philippines during the early months of World War II.  His death from cerebral malaria and battlefield injuries were the direct result of the inhumanity by the Imperial Japanese Army. Without an exception for his severe health condition, he was compelled to go on the Bataan Death March.

Charles, commonly known as Chuck, was from Colorado Springs, Colorado. He enlisted in the Army Air Corp in 1940. He was trained at a Boeing School in Oakland, California to service the new B-17 or the Flying Fortress. He arrived at Clark Field in Central Luzon just a few weeks before the Japanese attack on December 8, 1941.

After the Japanese destroyed most of the B-17s at Clark Field, Chuck was reassigned to the infantry and retreated to Bataan. The former U.S. Army Air Corp personnel comprised a significant section of the defensive lines that initially repelled the Japanese Army. Eventually, Chuck was injured during the fighting and started suffering from malaria.

Chuck was fortunate to survive the Bataan Death March and the subsequent forced trek to Camp O’Donnell. However, the march was just too much on his health. Shortly after his arrival at O’Donnell, he died of cerebral malaria. He was buried in a mass grave. The life of the 21-one year-old ended tragically many miles from home.

In 1948, the U.S. Army disinterred his remains from a mass grave at Camp O’Donnell. After identification, Chuck’s remains were shipped to Colorado Springs for a final burial at the Evergreen Cemetery. The return of Chuck’s remains brought comfort to his family.

On this Dec.8, 2021 80th Anniversary of the attack on the Philippines by Imperial Japan, let us give thanks and honor the Filipino and American servicemen who served and the many servicemen who died at such young ages to protect our freedoms. I am very proud that one of these young men was related to me.