Filipino farm workers hold the line, save cows despite BC flood

Filipino farm workers hold the line, save cows despite BC flood 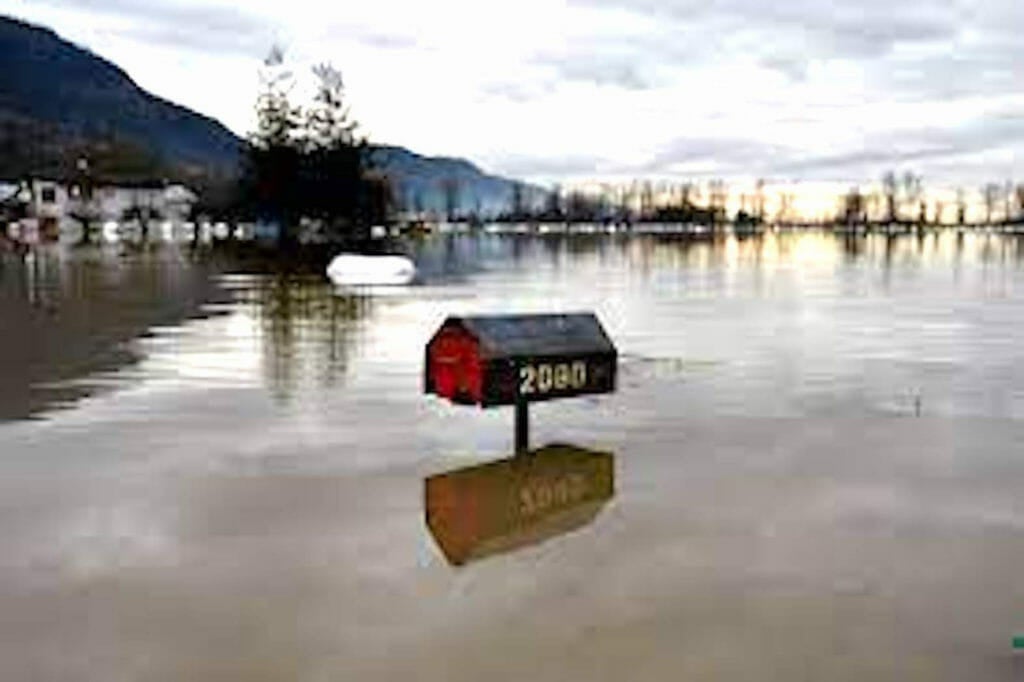 Canada’s weather department has warned residents to stay vigilant in the next 10 days as more rainstorms are expected, potentially making repeat destruction.

RED DEER, Alberta – A group of Filipino farmworkers in the recent flooding in British Columbia never left their employer’s side amidst the rising floodwaters, and instead helped herd their cows to safety.

The widespread destruction has triggered the province to announce a state of emergency on Nov. 17, warning its residents to assist in preserving essential supplies by not hoarding and buying only what they need.

Canada’s weather department has warned residents to stay vigilant in the next 10 days as more rainstorms are expected, potentially making a repeat destruction.

Janeto dela Cruz, 40, doubted whether the heavy downpour on the morning of Nov. 15 was the same as in the previous years. At past 6 a.m., looking out the window, he noticed the flood had crept on to the nearby boundary road, some 2 km close to the U.S. border.

Dela Cruz has been working as a farm supervisor at Dykman Cattle Company for six years. The dairy farm located in Abbotsford, B.C. currently has six Filipino temporary foreign workers among its crew.

Abbotsford is one of the main cities ravaged by the flooding and mudslides, along with Chilliwack and Hope.

Although Dela Cruz said flooding is common in the area, this time it appeared the rising waters was not letting up. “Malakas ang hangin nun at malamig ang panahon. Walang tigil ang pag ulan. Pumasok pa din ako sa work hanggang sa pag uwi ko ng bahay hindi huminto ang ulan (There were strong winds and it was cold. The rain was non-stop. I went to work and back home, and the rain had not stopped),” he said.

Noticing the rising floodwater, he put away important personal documents and went back to work.

Back at work, together with the farm owner and some of his family members, the workers had started moving the cows on to a safe location.

Meanwhile, Dela Cruz posted a comment on the Abbotsford police department facebook page asking for food and water worried they would not have access to basic supplies following the flood.

Janeto’s facebook comment was shared by Sherrylyn Vivero who lives some 37 km away in Maple Ridge, B.C.

Vivero used to live in Abbotsford but moved two years ago with her family. Vivero is first president of the Filipino Canadian Community of Abbotsford.

Vivero said Filipinos are the third largest visible minorities in Abbotsford, reaching over 1,500 in number according to a 2016 survey by Census Canada. Many work in healthcare, farming, tourism and hospitality industry she said.

Vivero who is a registered nurse at Abbotsford Regional Hospital’s dialysis unit said the heavy rains and windy condition prompted local authorities to set up road closures on Sunday, Nov. 14, while she headed for work on a night shift. 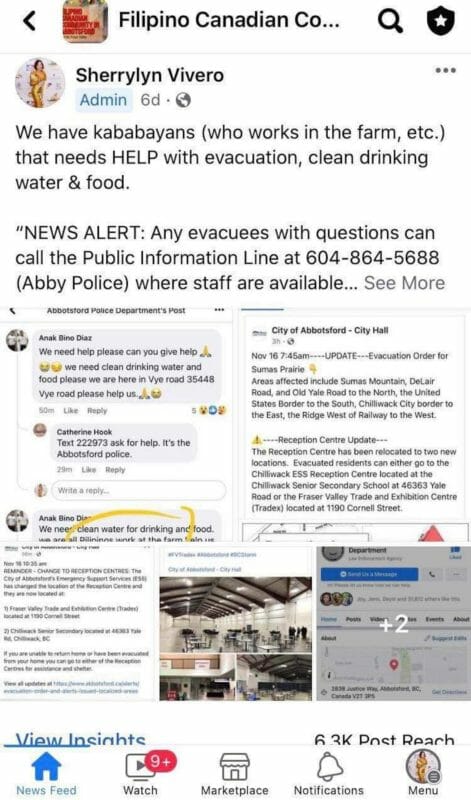 “Nakakatakot that time. There was one car in front of me, sinundan ko na lang[because of detour]. Madilim at  malakas ang ulan (It was scary. I followed the one car in front of me. It was dark and raining hard), ” she said, adding the reroute led into an unfamiliar road in the mountains. After almost an hour, she reached the hospital.

Some of her patients could not come in for their dialysis due to the flooding. Those who needed dialysis but live in outlying areas were airlifted to Abbotsford to receive dialysis, she said.

After her shift, through her group’s online page, she began posting about the situation. Her posts ignited a virtual bayanihan, tapping from volunteers, assistance in kinds, such as boxes of pizza, or spare rooms for momentary accommodation or simply warm Filipino food.

Vivero said two Filipinos families have been evacuated at the city’s Trade and Exposition Center (Tradex) where most evacuees are staying.

Vivero said any help is being channeled through the city. A network of Filipinos from other cities such as Surrey, Chilliwack and Hope is actively monitoring how Filipinos are coping with the recent disaster in their localities.

Meanwhile, Highway 1, a major thoroughfare through the Fraser Valley was reopened on Thursday afternoon after being submerged in floodwaters and closed for a week.

However, a stern warning from the province’s transportation ministry said it could be closed anytime if conditions deteriorate, in light of expected storms in the coming days.

Warnings issued by Environment Canada stated heavy rains are expected to ease up Thursday night in Chilliwack, Hope and Abbotsford, with a total rainfall of 50 mm over southern sections to 70 mm near the mountains.

“Localized flooding in low-lying areas is possible. Heavy downpours can cause flash floods and water pooling on roads. Don’t approach washouts near rivers, creeks and culverts,” it said.

B.C. provincial government is providing $2,000 emergency relief for those households affected by the flooding.

The Philippine Consulate General in Vancouver has yet to respond for an interview regarding reports of Filipinos affected by the flood.