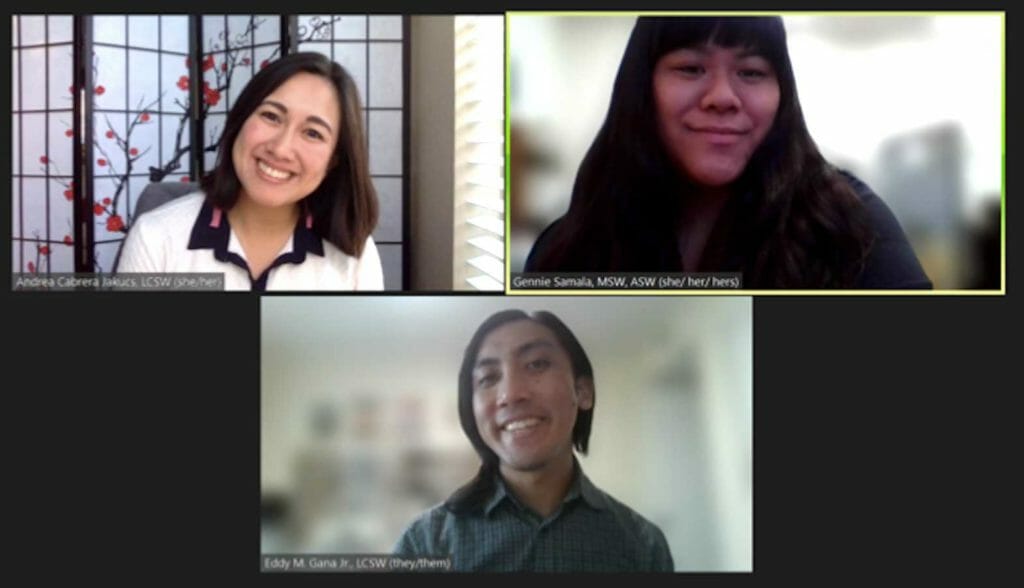 Throughout the last year, mental health providers Eddy Gana and Andrea Jakucs have dedicated one Monday out of every month to facilitating mental health discussions in the Filipino American community.

The discussions make up a series called Mag-Usap Mondays, a virtual space they created to help reduce the stigma around mental health.

“What other way to [address the stigma] than to talk about it?” said Gana, a licensed clinical social worker who runs the mental health outreach program at non-profit Search to Involve Pilipino Americans. “With our clinical skills and our expertise, we’re able to provide a space for our community to talk about depression, anxiety, grief and loss.”

Mag-Usap Mondays celebrated its anniversary in early November. Since it first launched, the series has covered a range of topics from domestic violence to the cultural value utang na loob (debt of gratitude). Gana and Jakucs said they hope to fine tune the monthly Monday discussions based on feedback from participants as it continues into year two.

The series is tailored for Filipino Americans but is open to people who are interested in participating regardless of ethnicity. It has had non-Filipino Americans, participants between the ages of 20 and 89, and people from as far as the East Coast and Philippines join in the discussions.

Gennie Samala, a clinical social worker who serves Filipino American seniors at Los Angeles community health organization SSG Silver, joined the Mag-Usap Mondays team later on in its first year. She said the most common feedback the team has received from participants is that they are happy there’s a space for Filipino Americans to talk about mental health.

“It’s something that definitely, before our time, didn’t exist,” Samala said. “So the fact that it does exist, it gives people that sense of just knowing that there is a place for them to share and relate their experience with others so that they don’t feel so alone.”

The sessions begin with participants introducing themselves, followed by facilitators asking guiding questions relating to the topic of focus. (During its anniversary session, those in attendance were asked to share their thoughts on Filipino mental health and steps that need to be taken to address stigma in the community.)

Sessions typically end with a wellness activity — such as deep breathing — to equip people with coping tools, and information on mental health services, Jakucs said.

Samala said that while Mag-Usap Mondays serve as a space to talk about mental health, it also serves as an access point for people who need mental health services.

“If we can serve them, we can help them find what they’re looking for,” she said.

Mag-Usap Mondays are not recorded, and people who attend are asked to keep everything shared in the space confidential.

Organizers have invited guest speakers to Mag-Usap Mondays, including artist Chris Aguilar who wrote a play called StanD to help address stigma around mental illness. Mental health advocate Kayzelyn Magsino was another guest speaker who talked about her challenges with navigating bipolar disorder while finding strength to create a platformcentered around the value of kapwa (unity of the self and others) to heal people.

“So overall, it’s bringing the community with all the expertise [together],” Gana said. “Whether mental professional or mental health advocate, we’re all coming onto the same wavelength when talking about wellness and wellbeing.”

The next Mag-Usap Monday session will take place on Dec. 13 from 3 to 4 p.m. It will focus on navigating the holiday season with Filipinx/a/o families.