Tragedy on Main Street, and in an American courtroom

Tragedy on Main Street, and in an American courtroom An SUV drove into a holiday parade in Waukesha, Wisconsin, killing 5 people and injuring more than 40 others. SCREENSHOT

If you thought there’d be solace on the weekend from the shock of what America has become, you were wrong.

In Waukesha, Wisconsin—-less than 60 miles north of Kenosha, the scene of last week’s verdict in the Kyle Rittenhouse trial—comes another tragedy that would make you wonder where our country is going.

In America, the family car can be weaponized to wreak havoc, just like that.

A speeding red SUV drove parallel to marchers in a parade on Main Street before barreling into a marching band and the crowd, leaving 5 people dead and at least 40 injured, including children.

One of the key eyewitnesses was American Filipino Angelito Tenorio, an alderman from nearby West Allis, and a Democratic candidate for state treasurer. He just finished marching and was settling in to watch the rest of the parade. And then he heard the driver throttle up.

Tenorio and his family were safe, but many dozens more weren’t as first responders administered to people caught in the chaos. They will be identified and the town will mourn.

But this was Main Street in America, where now we know you don’t need a gun to terrorize the public. 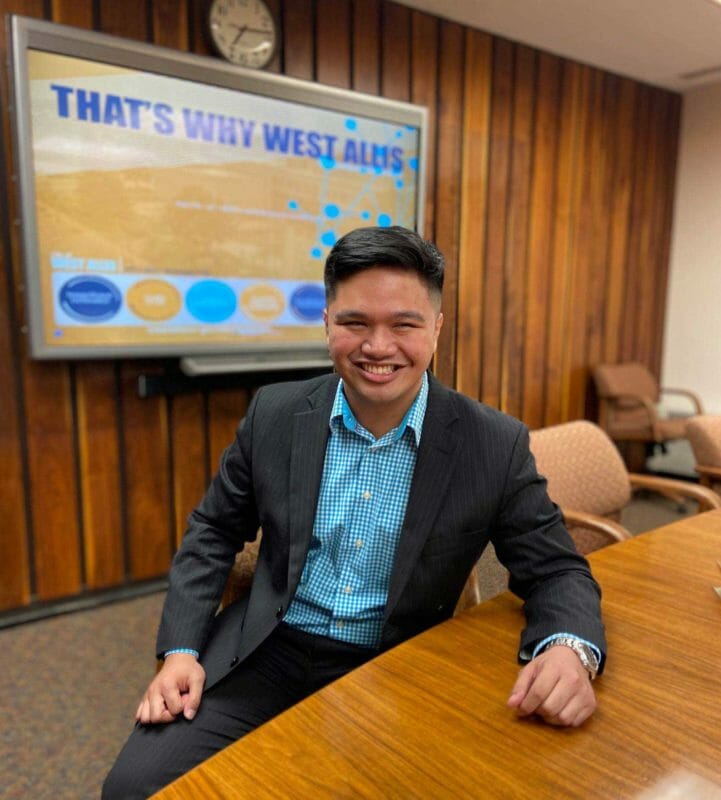 Filipino American Angelito Tenorio, an alderman from nearby West Allis and a Democratic candidate for state treasurer, witnessed the deadly vehicular incident. FACEBOOK

Not even a holiday parade can repel the evil when someone decides to weaponize the family S.U.V. on a Sunday afternoon.

As if we didn’t have enough to think about.

The Kyle Rittenhouse Kenosha embarrassment technically is over, but the enduring impacts of the trial are just beginning.

Time to start paying attention to the change that’s happening in America. It’s going to affect every person on the wrong side of a gun.

For AAPIs who’ve been accosted or mistreated in more than 9,000 instances of racial animus during the pandemic (including gun deaths), the five-count Rittenhouse verdicts sounded the general alarm.

What does it mean? That a white vigilante in 2021 can do as he or she pleases in America?

The lessons of the past have not been learned, and a new lesson has emerged to satisfy America’s gun culture.

Hate is defensible in a court of law.

AAPIs already know the terror of armed white vigilantes, yesterday and today. The killing of six Korean Americans in Atlanta this year was just an update. Go back 155 years ago to San Jose, California, when Chinese were forced out of Chinatown by whites in five separate instances, starting in 1866.

And it wasn’t only San Jose.

We have just begun to see the trend of cities apologizing for these sins. San Jose did so earlier this year, for acts of “fundamental injustice, terror, cruelty and brutality.”

It’s a good trend. But in real life, one Rittenhouse trial negates any number of apologies.

No use going over the prosecution’s failed missteps in that trial. Or to criticize the erratic ways of Judge Bruce Schroeder, such as not permitting actual victims who were shot to be called “victims.” But now we know this case did have a victim. As the jury saw it, the victim was clearly Kyle Rittenhouse, the baby-faced avenger, protector of abandoned buildings, who masqueraded as an “EMT,” while brandishing a long-gun, the kind that he could legally carry as an underage minor.

As I watched the videos of the protest in Kenosha, it looked to me that people who saw Rittenhouse walking the streets with an AR-15 were simply trying to be heroic and disarm him.

At least, that’s what it looked to me, just a viewer in TV Law School, not a juror.

Of course, the prosecution’s witness Gaige Grosskreutz, whom Rittenhouse shot in the arm, probably gave the most damning testimony during cross–– for the defense.

Grosskreutz said he aimed a gun at Rittenhouse. Was it reasonable for Rittenhouse to think he was under attack and acting in self- defense? That’s the way the jury saw it. Remember, the standard is beyond a reasonable doubt.

We cannot hear from the two other men who were shot and killed at the hands of Rittenhouse. Despite whatever the judge thinks, Anthony Huber and Joseph Rosenbaum were victims, who did not get justice.

Was it reasonable for the jury to not even consider the recklessness of Rittenhouse in the other lesser charges? That’s the jury. They deliberated in secret. Couldn’t be worse than the other aberrations in this trial–allowing a juror to take home “Jury Instructions;” banishing MSNBC from the proceedings when a freelancer appeared to be following the juror’s van; the judge’s jokes about the punctuality of Asian food.

The fact is the legal questions asked of the jury are very narrow when it comes to consider either homicide or reckless endangerment. That’s what  Prof. Dan Gonzales, Professor of Asian American Studies at San Francisco State’s College of Ethnic Studies, and holder of a J.D., told me on my podcast, Emil Amok No. 184 on my Emil Guillermo YouTube Channel.

The jury didn’t have to consider why Rittenhouse was even out on the streets, or even the propriety of a 17-year old with an AR-15 taking the law into his own hands.

The question was simply on self-defense.

Gonzales said he wouldn’t be surprised if a large number of Filipinos who are part of America’s gun culture took Rittenhouse’s side.

Still, no use re-litigating or playing Monday Morning juror. It’s done. And now we must deal with the fallout. It will be considerable.

Self-defense has always protected the police in situations like this, and now we see it could be used to protect private citizens taking the law into their own hands. Vigilantes. That’s what Rittenhouse was before—in the eyes of the jury—he became the victim.

It was a successful ploy. It wasn’t the crying gun-toting infant eliciting sympathy. No, the ploy is “hate disguised as self-defense.”

That’s what we’ll have to deal with from here on.

When people show up “to defend,” but really intend to mix it up and fight, or at the very least intimidate, the mindset is far from law and order, but disorder.

And when people show up at a future protest about any issue, and a gun-toting person—a “Rittenhouser”—openly carries a gun, what will they think when they see an Asian American?

Will they have just watched Simu Liu as a Marvel hero and assume we all know martial arts, making them feel inadequate and endangered?

Or will they just see our Asianness and think of Trump’s Kung Flu scapegoating and decide that we’re to blame for two years of the virus and masks? Kyle Rittenhouse listens as the attorneys and the judge talk about jury instructions at the Kenosha County Courthouse, Wisconsin, U.S. November 15, 2021. Sean Krajacic/Pool via REUTERS

Will they somehow be “triggered” to pull a trigger?

That’s when we’ll see Rittenhouse the Sequel. It will become commonplace.

Does the stereotyping sound ignorant? Of course, but ignorance prevails when juries give shooters like Rittenhouse the benefit of the doubt.

Ignorance promotes fear. And that’s at the base of the entire Rittenhouse defense. It’s what got him off.

The legal system did us no favors. The verdict doesn’t quell or deter what’s sure to lead to more proclamations of self-defense.

In a gun-toting society, where open carry and conceal carry arms continue to proliferate among the ignorant, there’s rough going ahead. Especially when people shoot first and ask questions later.

There will be more Rittenhouse-like trials. Expect it.

Gosar called it a joke. It was anything but. Democrats rebuked Gosar with a censure, but the vote to condemn Gosar wasn’t unanimous. It was 223-207. That’s how close this country is to a moral collapse.

This is the new America where one of the leaders of the Jan. 6 insurrection, Jacob Chansley, the QAnon shaman, gets 41 months in prison. But some Republicans don’t think it’s fair. Rep. Matt Gaetz (R-FL) called him “relatively harmless.” Compared to what? Kyle Rittenhouse, who shot and killed two men and got off because of his claim of “self-defense”? Gaetz reportedly wants to honor Rittenhouse with a job on Capitol Hill, though it seems there’s a competition among right-wing pols to see who will be first to exalt the vigilante “hero.”

There is still some hope. The trial of the killers of Ahmaud Arbery is expected to end on Monday. The prosecution has done its job grilling the shooter Travis McMichael, who decided to take the law into his own hands. A guilty verdict would temper the enthusiasm of vigilantism in America. Given the state of our nation, that would be no small thing.

Arbery was out jogging in Georgia. Bad stuff happened.

Just like people were at a holiday parade on Sunday on Main Street in Wisconsin.

This is the America we’re in now. One of fear not of love. Fear of each other.

Is there hope for love and redemption? Rittenhouse is already choosing sides. He’s coddled by Fox News  and fought over by right-wing congressman who want to hire him as an intern. They all want to make him a right wing prop.

Those of us on the other side needs to reach out too. If he wants to protect America, we should be able to do that together. He needs to know, America is us too, the one true America has all of us.

Emil Guillermo is a journalist and commentator. Check his podcast on the Emil Guillermo YouTube Channel, or FaceBook @emilguillermo.media or on Twitter @emilamok, Live at 2p Pacific, or recorded on www.amok.com

He’ll comment on this article and wish you a Happy Thanksgiving!