The world’s richest man Elon Musk suddenly has more cash than most people can spend in their lifetime. What will he do with it?

Elon Musk, whose net worth is pegged by Forbes at $270 billion, had traditionally kept his wealth tied up in his stake in Tesla Inc, the electric car maker founded in 2003. He borrowed against his stock when he needed more cash and sold stock mostly to cover tax obligations.

More stock sales are expected given that he has sold only about 3% of his Tesla shares thus far. He has not disclosed what he will do with the proceeds, yet the cash haul has already created a buzz among major charities which are always vying for wealthy donors.

“His opportunity to have great impact is to donate very significant sums of money to leading organizations that are dealing with the most pressing problems with global poverty and access to healthcare,” Melissa Berman, CEO of Rockefeller Philanthropy Advisors, a nonprofit that advises on charitable giving, said in an interview. The logo of car manufacturer Tesla is seen at a dealership in London, Britain, May 14, 2021. REUTERS/Matthew Childs/File Photo

Musk did not respond to requests for comment on his plans.

Musk’s public philanthropy gestures have so far trailed other billionaires. Musk and Amazon.com Inc founder Jeff Bezos have donated less than 1% of their net worth, whereas Warren Buffett and George Soros had given away more than 20% of their net worth as of early September, according to Forbes.

It is possible, however, that many of Musk’s charitable donations have not been made public.

Musk signed the Giving Pledge in 2012, a commitment by some billionaires to give at least half their wealth to philanthropy in their lifetime or upon their death. In 2001, he set up the Musk Foundation, offering grants for the “development of safe artificial intelligence to benefit humanity” among other causes, according to its website.

Musk’s foundation has over $200 million in assets, which “isn’t that big” compared with his fortune, said Brad Smith, the president of Candid, a nonprofit information service that provides information on other nonprofits and foundations.

Earlier this year, Musk and his foundation offered a top prize of $50 million to the inventor who can come up with a technology to help remove carbon from the atmosphere. The prize has yet to be won. 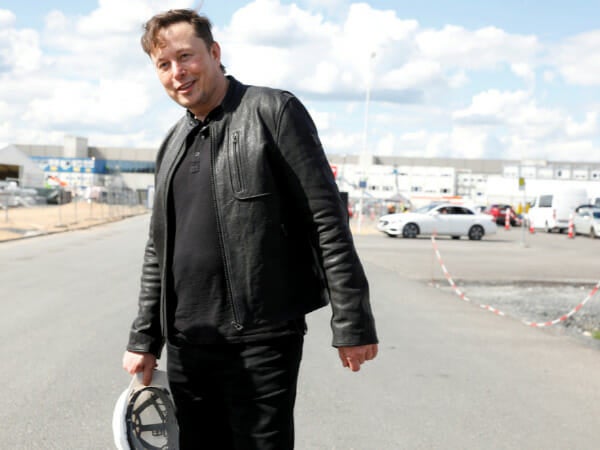 SpaceX founder and Tesla CEO Elon Musk looks on as he visits the construction site of Tesla’s gigafactory in Gruenheide, near Berlin, Germany, May 17, 2021. REUTERS/Michele Tantussi/File Photo

Musk has also flirted with more ambitious philanthropy goals. He tweeted last month that “if (the United Nations World Food Programme) can describe … exactly how $6 billion will solve world hunger, I will sell Tesla stock right now and do it.”

Musk was responding to a plea for a donation from David Beasley, the World Food Programme’s executive director. Beasley tweeted he was willing to meet Musk to provide more details, and it is not clear if the two explored the idea further.

Beasley and the World Food Programme did not immediately respond to a request for comment.

Musk has shown in previous tweets that he is thinking about ways to have a big philanthropic impact. In January, he asked Twitter users about “ways to donate money that really make a difference (way harder than it seems.)”

There are also tax benefits associated with charitable giving. Under the U.S. tax code, most donations can be deducted from one’s taxable income.

“Almost any billionaire that you can think of donates money and minimizes tax bills,” said Ray Madoff, a professor at Boston College Law School where she is director of the Forum on Philanthropy and the Public Good.

Besides donating cash, there would be an additional tax benefit for Musk gifting Tesla stock. This is because shares that are donated to charity are not subject to capital gains tax, as they would be if they were sold.

“It’s like a double bonus of donating. He is in a position where there’s a substantial incentive to donate,” said Brian Mittendorf, an accounting professor at the Ohio State University.

Musk’s younger brother, Kimbal Musk, who is also a Tesla board member, deployed that tactic as recently as last week. He gifted 25,000 Tesla shares worth $31 million to an unidentified charity.

With Tesla’s shares hovering near record highs, Musk could take advantage of their current valuation by donating more of them, said Bob Lord, an associate fellow at the Institute for Policy Studies who studies tax policy.

“If you’re going to donate stock, when do you want to donate it? When it is at its peak,” Lord said.