Mad rush to hip-hop, not to democracy

Mad rush to hip-hop, not to democracy 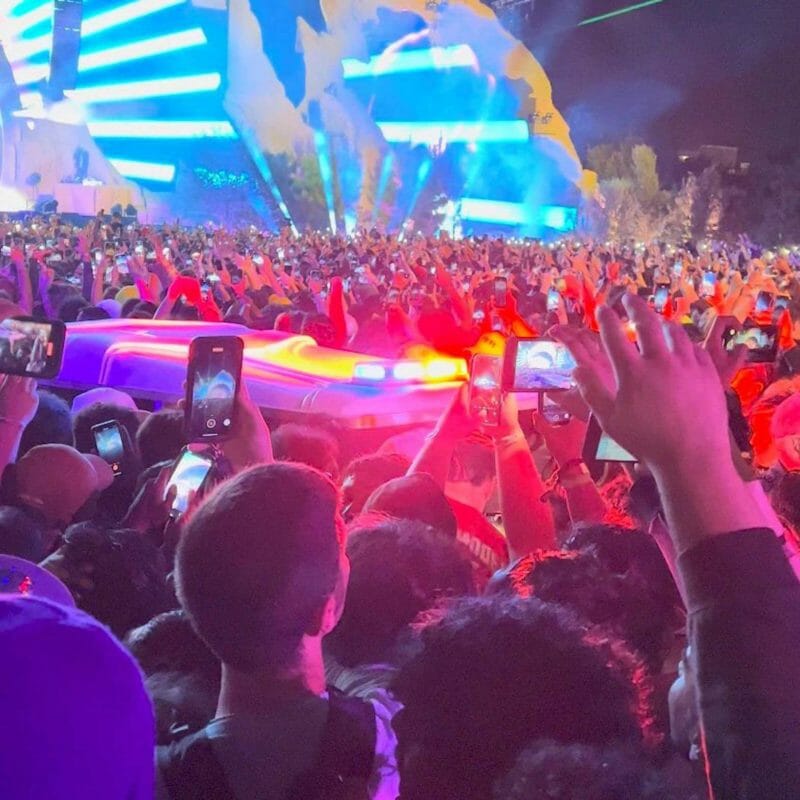 An ambulance is seen in the crowd during the Astroworld music festiwal in Houston, Texas, U.S., November 5, 2021 in this still image obtained from a social media video on November 6, 2021. Courtesy of Twitter @ONACASELLA /via REUTERS

I’m still a little shocked at what I saw on news videos about Friday night’s Astroworld Festival in Houston.

And it was from the very beginning, when people crashed the security gates, creating a mad rush to get to what? The best spot in the death crunch that was yet to come once the music began?

I started going to rock concerts in earnest when I was a American Filipino teenager in Houston. I had taken a gap year from college and was the all-night DJ on the biggest rock station in town. But whenever I saw “festival seating” on a ticket, I knew it was more than just a warning, but an invitation to disaster.

Festival seating is when the entire venue becomes a mosh pit. And you get the kind of nightmare mad rush that occurred over the weekend. Don’t know if there was such a warning on the ticket to Travis Scott’s hip-hop Astroworld Festival tragedy at NRG Park.

But I did know Asian Americans would sadly be in the mix. Our choices aren’t just K-Pop or classical music.  It’s the full-range. Our universal tastes run the gamut to C&W to rap and hip-hop.

And that’s why I feel for  Danish Baig, 27, born near Dallas, an Asian American Pakistani, now a district manager for AT&T, who went with his fiancé for a fun weekend to see Travis Scott.

He didn’t expect to die in the crush of people as he tried to save his fiancé from being trampled.

“She was stomped on, hit, punched, horrendous things were happening to her that I don’t want to mention,” said Basil Mirza, Baig’s brother, who was also at the concert. “My brother was trying to save her and he did, he saved her, and it cost him his life.”

At this time no precise cause of death is given. But the family said it was from cardiac arrest suffered from the crush of people.

The fiancé survived. But Mirza, speaking at Baig’s funeral on Sunday wants answers.

“My brother was laying on the ground. They were chanting to stop the event. Nobody stopped the event,” Mirza said in an interview with Dallas news station WFAA.

“In this horrendous event, people that were in it (who) took part in this event, Travis Scott’s team, the NRG team, everybody who was associated with this should be held accountable for the lives that were lost today. We’re grieving. We’re in pain.”

Mirza wants answers, not a tweet, but real answers from Scott. “He could stop a show for his shoe, but he couldn’t stop the show for people?” Mirza asked. “It was upsetting and sad seeing people thrown left and right, stop, girls, guys, everybody, little kids,” Mirza described the scene.

Danish Baig is the oldest on the list of the reported eight  dead, the youngest of whom was 14. They came from all over the nation, making this more than just a regional concert that has gone bad. It’s a national tragedy.

The family still intends to honor Baig on his birthday which would have been on Nov. 16. “Just please pray for all the families, for our family,” said Mirza. “And just stay united and we’ll all get through this hopefully,” Mirza said.

The event was promoted by LIVE NATION, one of the biggest, if not the biggest, pop/entertainment promoters in the business. Being in the fun business, the company  should have known better.

Before you see or hear another Travis Scott rap, watch Mirza grieve for his brother Danish and the others caught in the crush. It’s more real than a rhyme.

No mad rush to democracy

The mad rush for an Astroworld Festival that literally killed is in stark contrast to the less than mad rush for our  democracy on election day earlier that week.

A week after a pivotal election in the U.S., even in Boston–the most positive election for people of color in the U.S.–less than 30 percent of the electorate bothered to vote.

What if Travis Scott were on the ballot?

One can speculate that the pandemic’s effects on people forced to be masked and sequestered had created a pent-up energy for liberation and fun, i.e.,  concerts and such.

But if you saw the KPRC-TV video of people crashing the concert  gates from the beginning, you saw a young, diverse group of Americans in full Darwinian mode. They were breaking through not in an “all for one, one for all” fun egalitarian way,  but in an “all for me” way.

It was like a flashpoint. People not caring  for laws, rules, or civility, but just themselves and the promise of selfish, hedonistic joy.

And when the music started it all exploded into tragedy.

It wasn’t just the pandemic either. Since 2016, this is part of the erosion of our democracy and society.  Why? You can point to the Trump administration and its ways, thumbing its nose at the rule of law, and then promoting lies about the 2020 election when the truth was too hard for them to take.

And, of course, that ended with a special felonious gatecrashing at the Capitol  Jan. 6. Don’t think the Astroworld Festival didn’t share a bit of that anti-authority vibe. There certainly wasn’t much empathy for other people in the audience. The music went on as people were crushed.

That’s the mentality that Trump has brought out in America.  There was always a greater sense of respect and civility in America.  But then the balance was lost when Trump said, “Screw it,”  and insisted on his way to the bitter end.

When all the rest of us act like the former leader of the free world, you see how ugly the world can get. But until he’s restrained and held accountable, GOP leaders continue to hold him up as a standard of political success.

And people carry on with a “Trump did it, why not me?” That’s the irony. Because if Trump does get elected again, he will be the authority. And he will crackdown and use it against the people he disagrees with, or unruly folks like the diverse group of hip-hop lovers who crashed those gates at Astroworld.

Think of Trump and the tanks at the White House during the BLM march the summer of 2020.

The ugliness of the weekend could be a harbinger of what could happen.  But let’s hope not.

After the election, the Congress finally passed something for Americans.

It indicates there’s still time to right the ship and keep moving the country away from Astroworld.

Emil Guillermo is a journalist and commentator. He writes a column for the North American bureau. See his vlog, www.amok.com. See his live show on Facebook Watch and YouTube at 2p Pacific, Monday-Friday; or on Twitter @emilamok

MOST READ
usa Credit card utilization – everything to know
usa Five ways to become a successful entrepreneur
usa Filipino farm workers hold the line, save cows despite BC flood
usa Andres Bonifacio, a Freemason until the end
usa Breaking the Silence: The perils faced by women migrant workers
usa Best coffee maker for home use
usa U.S. must study data before deciding on travel ban over new Covid variant – Fauci