Stephen Curry scored 18 of his NBA season-high 50 points in a third-quarter flurry Monday night that rallied the Warriors past the Atlanta Hawks 127-113 in San Francisco, Golden State’s fifth straight win.

Atlanta led by as many as 15 points in the second quarter before getting steamrolled by the NBA’s winningest team in the second half.

Curry, who had been held to 20 or fewer points in four consecutive games, finished 14-for-28 from the field, 9-for-19 on 3-point attempts and 13-for-13 at the foul line. He also found time for 10 assists, giving him the first double-double in a 50-point game of his career.

Trae Young scored 28 points and John Collins added 19 for the Hawks, who lost their fourth game in a row. Anthony Davis scored six of his 32 points in overtime and added 12 rebounds as Los Angeles ended a two-game losing streak with an overtime victory against visiting Charlotte.

Carmelo Anthony had 29 points off the bench and Russell Westbrook amassed a triple-double with 17 points, 12 rebounds and 14 assists as the Lakers won for the first time in three tries since star LeBron James was lost for at least a week with an abdominal strain.

Terry Rozier scored 29 points for the Hornets and LaMelo Ball had his second career triple-double with 25 points, 15 rebounds and 11 assists. Charlotte overcame a 14-point, fourth-quarter deficit to force overtime.

Ja Morant scored 33 points, including the final seven of a pivotal fourth-quarter run, and Memphis held off visiting Minnesota in overtime.

Memphis pulled ahead immediately in the extra frame when Desmond Bane hit a jumper for two of his 13 points and Morant made two foul shots. The Grizzlies never trailed in the overtime. 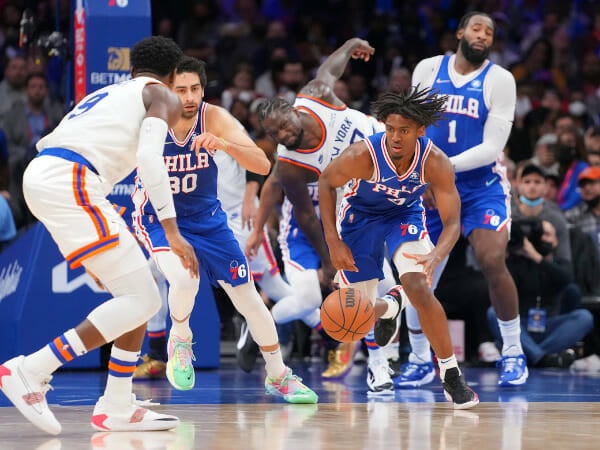 RJ Barrett added 15 points and 10 rebounds for the Knicks, who rebounded after a 17-point loss Sunday on the road against the Cleveland Cavaliers.

The depleted Sixers played without Joel Embiid, who tested positive for COVID-19 and missed the game. Andre Drummond powered the Sixers with 14 points and 25 rebounds. Furkan Korkmaz scored 19 points and Tyrese Maxey added 16. 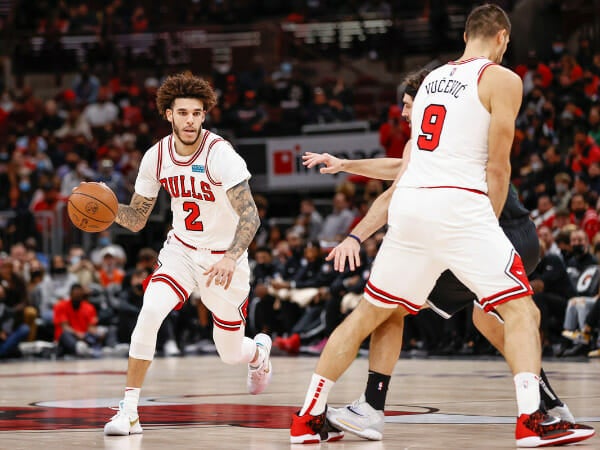 DeMar DeRozan scored seven of his 28 points in a decisive run early in the fourth quarter as Chicago pulled away for a victory over visiting Brooklyn.

DeRozan hit 10 of 20 shots and scored at least 25 points for the fifth straight game to help the Bulls beat the Nets for the third time in the past 14 meetings. Zach LaVine added 24 for Chicago, which outscored Brooklyn 42-17 in the final period.

Kevin Durant led all scorers with 38 points, including 11 in the fourth, but the Nets saw their five-game winning streak end.

Tim Hardaway Jr. and Jalen Brunson added 17 points each as the Mavericks won for the fourth time in five games and for the seventh time in their past eight games against the Pelicans.

Jonas Valanciunas had his ninth consecutive double-double with 22 points and 11 rebounds while Josh Hart scored 22 for the Pelicans, who finished a four-game road trip with their seventh consecutive loss.

Nikola Jokic had 25 points, 15 rebounds and 10 assists for his first triple-double of the season before being ejected late in the game, and host Denver beat Miami.

Will Barton scored 25 points, Monte Morris scored 14, Jeff Green had 13 and Aaron Gordon had 10 for the Nuggets.

Harrison Barnes scored 26 points and De’Aaron Fox had 24 for Sacramento, which committed 24 turnovers en route to its second consecutive loss.