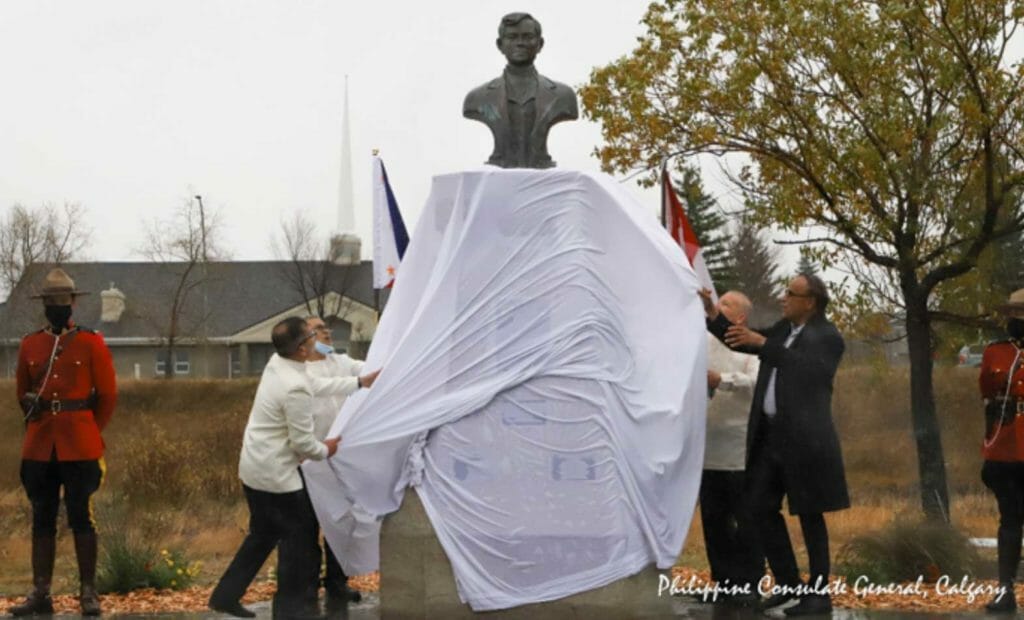 RED DEER, Alberta – Once more, Filipino pride beams atop a seven-foot pedestal featuring the bust of Philippine national hero Jose Rizal. The monument was unveiled on Oct. 23, amid rainy and cold weather in Airdrie, just north of Calgary City.

Renowned Filipino sculptor Toym Imao made the three-foot tall Rizal bust, which traveled from Manila to Calgary, then was brought to Airdrie. It is located in Nose Creek Regional Park.

The unveiling was 14 months in the making, courtesy of the Philippine Consulate General Calgary who led the project, in collaboration with the Filipino Airdrie Association, Airdrie City Council and an ad hoc group called the Rizal Monument Project Team.

The Rizal monument in Airdrie is the first in Alberta, and the fifth in Canada after the statues in Manitoba, Quebec, and Toronto and Markham City, both in Ontario.

The unveiling was witnessed by some 400 spectators, who came from Calgary, Edmonton, Canmore, Banff, Wetaskiwin, Spruce Grove, Stony Plain, and Lethbridge.

“[They] stayed throughout the program despite feeling cold and wet. They said they felt privileged, honored and elated to witness a historic event in the life of the Filipino community in Alberta,” said Consul General Zaldy Patron told INQUIRER.net.

“The Rizal monument in Airdrie is historic because it is the first of its kind in Alberta,” said Patron. He said the more than 175,000 Filipinos in the province, the second largest Filipino population in Canada, now have “their own Dr. Jose Rizal monument to symbolize and represent them in this multi-cultural province and city of Airdrie.”

The monument is PCG Calgary’s “biggest cultural diplomacy project” to date, he added.

“This is PCG’s humble way of honoring our national hero, of paying tribute to the hardworking Filipinos in Alberta and of promoting our Philippine heritage and culture in this part of the world.”

Airdrie City Mayor Peter Brown has become familiar with Filipino culture over the years, having worked with some Filipino temporary foreign workers in the past, and after joining many Philippine-inspired celebrations led by the local Filipino community here.

“When Consul General Patron mentioned the idea during a Filipino event in June, 2019, I embraced it immediately,” Brown told INQUIRER.net.

He said he had learned about Jose Rizal’s heroism, again from his exposure to the Filipino local culture and art scene.

There are more than a thousand Filipinos living in Airdrie, mostly found in the manufacturing, hospitality and service sectors, said Brown. He has been the head of the city for 11 years.

Meanwhile, Nose Creek Regional Park was chosen because it is centrally located in the city and is very accessible to the locals. Many multi-cultural events are held at this park, he said.

Brown remarked that the statue does not only represent Filipinos as a hardworking, family-oriented, fun-loving and friendly community, but also shows Airdrie as a welcoming community, promoting diversity, inclusivity and cultural awareness.

He referred to the unveiling as “one of my most exciting days as a mayor.” “We gave the people who were present, an important piece of Airdrie.”

The event also gave him the opportunity to wear the Philippine’s national costume, barong, albeit in the torrential rain.

A seven-men team dubbed as the Rizal Monument Project Team worked together to come up with the design, cost and implementation of the project following its conception in 2019.

In September 2020, a formal project proposal was sent to Mayor Brown, and in October of the same year the project was approved by the city council.

Consul General Patron also presented the project to the Community Services Advisory Board of Airdrie in February 2021, which endorsed it.

Two more sessions of the city council in March and April, 2021 carried out the approval for other project details.

The Rizal Monument project received the support of 32 sponsors and 192 brick donors, Filipino associations and individuals.

The consulate general expects the Rizal monument to become a tourist attraction for Filipinos in the province. It noted the monument will be an additional attraction during the annual Airdrie Festival of Light, which takes place every year in December.

The PCG is also planning to hold its Philippine Independence Day, Philippine Heritage Month, Rizal Day and other Philippine events at the Rizal monument site.