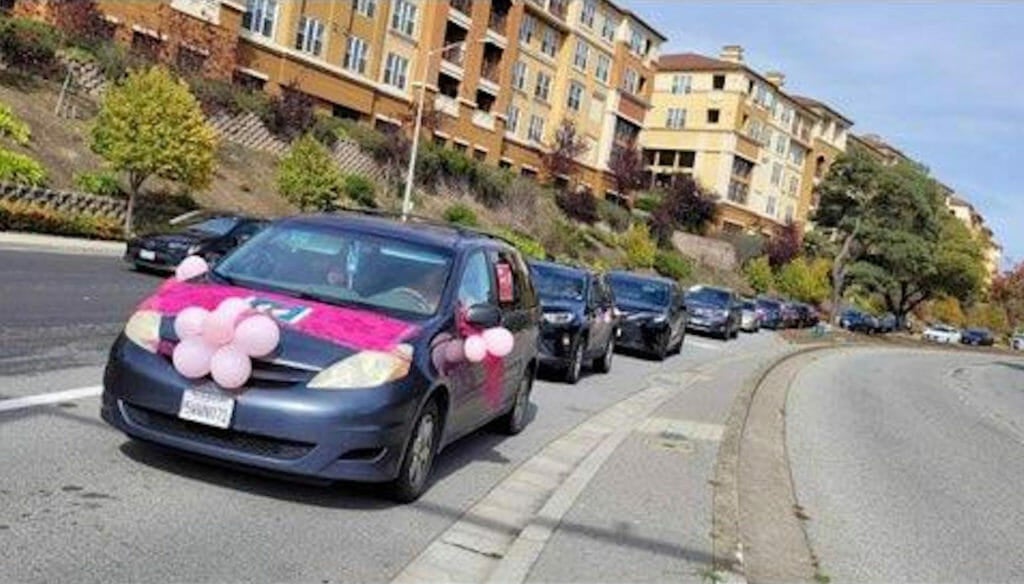 Some 50 cars, SUVs, vans and mini trucks moved around the densely Filipino populated areas in Daly City and South San Francisco with “Biyahe ni Leni” Caravan of Hope to drum up support for the vice president.

Volunteers came in their vehicles adorned with pink tarpaulins, posters, ribbons, balloons, artwork and costumes and excitedly took turns chanting and cheering Robredo. They intend to hold a caravan at least once a month leading up to the May 2022 elections.

The Bay Area motorcade started in a popular Filipino food chain branch on Mission Street in Daly City and ended at a  favorite Filipino shopping and food complex at Callan Street in South San Francisco .

“Tapos na po ang pananakot at pagnanakaw. (The days of fear and rampant corrupt practices have ended.) If we will not do anything, we may be looking forward to the restoration of the Marcoses and the extension of Duterte rule in the next six years,” Pedalizo warned.

Pedalizo added that they are so glad that t people in the Philippines and here in the U.S. are taking actions without the benefit of the alleged $10 billion ill-gotten Marcos wealth “but we will have the support of the people.”

Organizer Violy Reyes views the coming elections as really important “as we do not want another six years of Duterte and the return of the Marcoses to power.”

“We are also doing the caravan to reach out to the community, to remind to vote. To organize and educate our friends , relatives  neighbors to vote wisely as this is for the future of our kids and for the love of  our mother land,” Reyes said.

US Pinoy For Good Government leader lawyer Rodil Rodis revealed that he and another Filipino leader Loida Nicola Lewis initiated the filing of a 42-page citizenship complaint against Energy Secretary Alfonso Cusi, alleged close crony of Philippine President Rodrigo Duterrte businessman Dennis Uy, and several others for the reported acquisition by Uy of the Chevron Malampaya shares “at a so grossly disadvantageous bargain price.”

The Malampaya gas field in Palawan supplies an estimate 40% of energy needs of the Philippines instead of paying money to Saudi Arabia and other oil-producing countrie.

“What they did two years ago, they sold it to Dennis Uy at an incredible bargain basement price of only $450 million instead of $600 million, which was even then already a bargain price, after  some maneuvering,” Rodis maintained. “Dennis Uy set up his company with only a $100-capitalization. The rest was funded by Chinese Bank and a New Zealand Bank the majority of which is owned by the Chinese.”

Former Supreme Court Justice Antonio Carpio has reportedly called the deal “the biggest presidential gift to a political crony in Philippine history that dwarfs anything that any of the Marcos or Gloria Macapagal-Arroyo crony ever received” and Uy is all the while being backed up by a Chinese bank.

“Once they control Malampaya, they would control how much energy goes to the Philippines, the oil in the future and they can control the politics of the country of their control of the oil,” Rodis feared.

Cusi demanded that the complainants t return to the Philippines where he said they can be within reach of the Philippine justice system.

“It is the role of the Filipinos in America. We are not just observers from the outside. We are also in the fight in the Philippines especially because many of us are dual citizens. And being dual citizens, we have the right to defend our country and to make sure it doesn’t continue to be raped by these corrupt cronies of Duterte and Marcos,” argued Rodis.

Another leader Donny de Leon disclosed that the Tarlequeños USA helped organize the Tarlaceños for Leni Caravan early in the morning of Saturday, Oct. 23 with some 800 decorated vehicles with approximately 1,500 Tarlac natives participating. De Leon gushed, “It was organic, electric, inclusive, and I’m loving it! This is truly people’s campaign. So inspiring.”