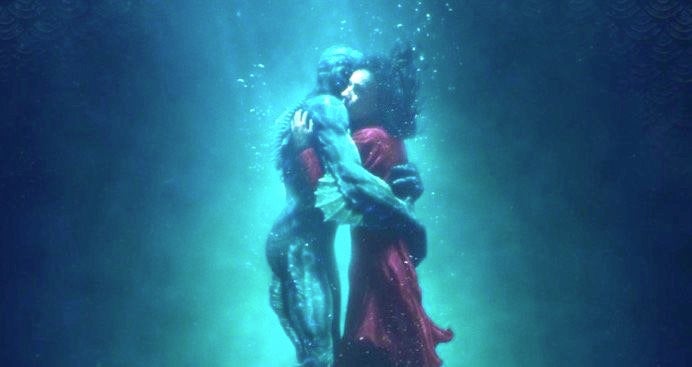 From Guillermo del Toro comes “The Shape Of Water,” an other worldly fairy tale, set against the backdrop of Cold War-era America circa 1962. In the hidden high-security government laboratory where she works, lonely Elisa (Sally Hawkins) is trapped in a life of isolation. Elisa’s life is changed forever when she and co-worker Zelda (Octavia Spencer) discover a highly classified experiment.

The journey of Elisa from loneliness and powerlessness to a heroine who takes huge risks forms the beating heart of the film. It’s all the more extraordinary that the role is almost without words. Rendered mute by a childhood trauma, Elisa communicates in American Sign Language, but she’s able to express herself effusively when she encounters the strange aquatic creature (Doug Jones) being warehoused in the government facility where she works as a cleaning lady. Where it’s about unadulterated expression and words are not needed, and you’ve the freedom to express so much through your eyes, breath and body.

Elisa is not someone who has a horrible existence until the creature showed up. She’s not leading a glamorous existence by any means. Part of her authenticity means digging into why she would risk so much for a creature whose past is inaccessible to her, whose very experience of life is a mystery, and digging into the valor that love unleashes in her. As soon as she senses their connection, not trying to help the creature would be a kind death for her.

The remaking of Elisa’s world starts when she first spies the creature in his transport chamber, and immediately realizes there is something very much alive within. Few details are known of the creature, only than that he is likely the last of his kind; that local people in the Amazon worshipped him; that he carries a marvelous lung structure allowing him to breathe on land, a potential boon for The Space Race; that The Soviet Military wants to possess him too; and that, unsettled by his intelligence and physical oddity, the man who captured him believes the creature to be a grave danger to humanity. But Elisa sees none of that when she sets eyes on the iridescent beauty in chains; to her, he’s sheer loneliness and that makes him instantly worthy of her attention. 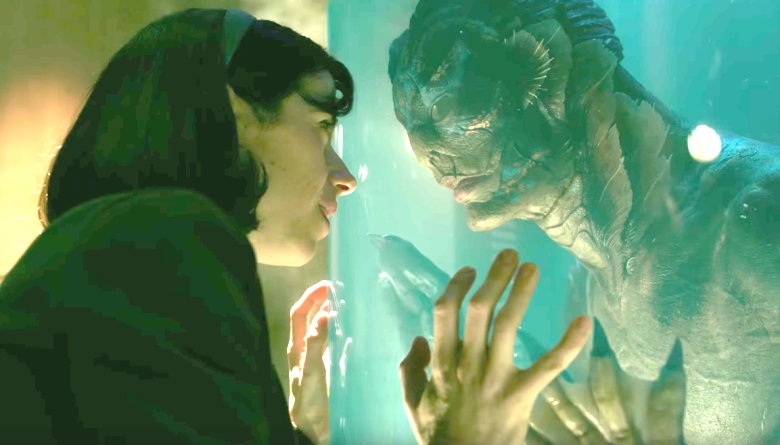 Sally Hawkins and Doug Jones star in “The Shape of Water.”

The man who hunted the amphibious creature deep across the Amazon with relentless determination is Richard Strickland (Michael Shannon), a steel-jawed, righteous, ambitious government agent who views his unusual quarry as nothing more than a ferocious beast to be manhandled into submission, and a ticket to his promotion. Strickland is a guy caught up in the whole mindset of the military-industrial complex, and he’s trying to rise up in the hierarchy. The paranoia of The Cold War has become part of him.

Before Elisa meets the creature, her loneliness is kept at bay by her neighbor and dearest friend in the world, Giles (Richard Jenkins), an equally lonely, down-on-his-luck ad-man and avid movie music lover. With Giles frustrated by an art career seemingly going nowhere, his great escape lies in The Golden Age of movie musicals, an age that was fading by 1962 but the remnants of which Giles hunts for regularly on his TV, with Elisa in tow. Giles loves the idea of a perfect fantasy world. He doesn’t really paint as an artist anymore and now he’s painting just to try to make ends meet, so musicals are where he lives. That’s why Elisa’s journey becomes a journey of salvation for him as well. Indeed, when Giles encounters the creature, the creative fire that had gone out in him reignites.

Mixing many genres from lush musicals to suspenseful noir, “The Shape of Water,”, particularly revisits and reinvigorates the enduring allure of the monster movie playing upon our most primal emotions of fear, abandonment and danger but also curiosity, awe and desire. Of all the iconic monsters, the most heartbreaking of all was the piscine amphibious humanoid from “Creature From The Black Lagoon” (1954), directed by Jack Arnold. At once dangerous and forlorn, reviled and yearning, the Creature touched audiences even as it scared them.

The film creates a blend of historically authentic Cold War America with the patina of a timeless legend. The film is monochromatic, so most of the palette is blues and greens with amber as a counter-balance. Red only comes in as the color of blood and love. The light is very expressionistic and full of shadows and feels very classic. Lighting is especially vital when shooting the creature. He’s not really a terrifying character, but he’s fascinating and the camera is fascinated with him. In terms of the cinematography he has to be lit very, very carefully, because of course as an audience member you want to see every part of him, but we also want to keep him a bit mysterious. “The Shape of Water” is a vivid phantasmagoria navigating the moral and physical dangers of a world of corruption, authoritarianism and war.