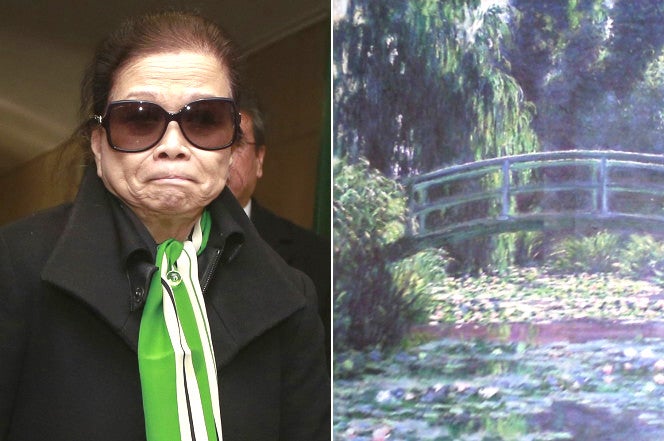 NEW YORK — A judge sentenced the former secretary of ex-Philippines first lady Imelda Marcos to two to six years in prison Monday, December 4, for selling stolen art works worth tens of millions of dollars and lying about them on her taxes.

Vilma Bautista faced 25 years but the judge reduced her sentence in consideration of her advanced age and poor health.

Bautista’s lawyer argued in vain that she had written permission from 1991 to sell the works on behalf of Imelda Marcos but had not been able to turn over the proceeds.

Bautista stole and sold Monet’s 1899 “Water-Lily Pond” for $32 million to a London art gallery in 2010. The gallery then sold the painting for $43 million to billionaire UK hedge fund manager Alan Howard who thought the painting was legitimate.

A jury returned a guilty verdict for tax fraud conspiracy and offering a false instrument, in less than three hours of deliberation. Bautista stole the art works from an Upper East Side townhouse used as a Philippine mission in 1986, when the Marcos dictatorship fell.

Bautista reported an income of $5,000 in a year she received $28 million. She was ordered to pay New York State $3,557,620.00 in unpaid taxes. She was allowed to remain free on bail pending her appeal of the verdict.

The Philippines government has tried to recover valuable works of art acquired by Imelda and Ferdinand Marcos during his authoritarian rule.