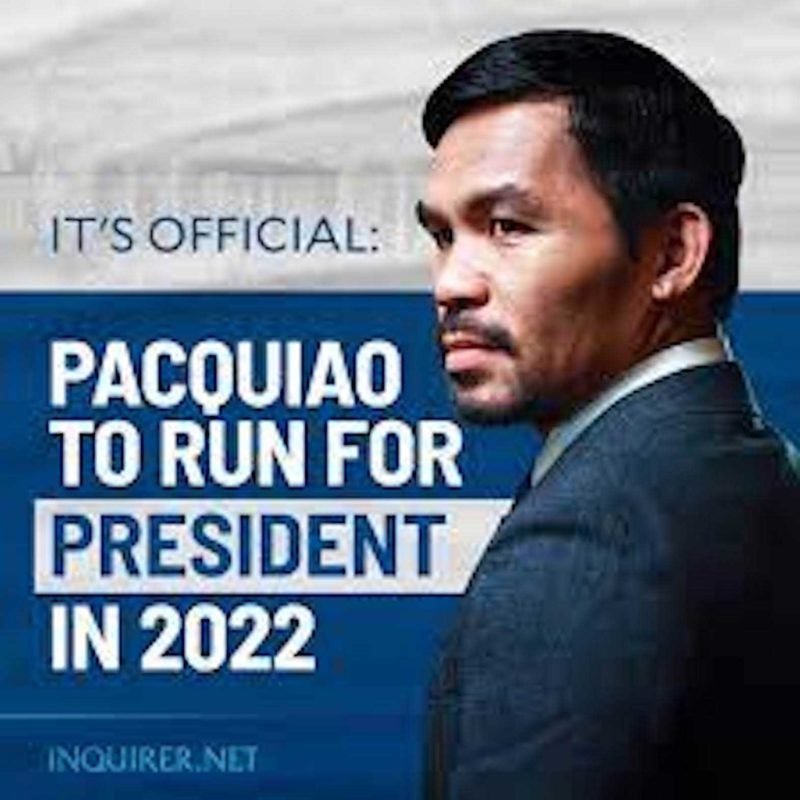 You are a Filipino icon. A boxing legend. One of the greatest champions of all time. The entire nation stops to watch when you climb the ring. You enhance the Filipino status on the international stage.

Now, you are running for the highest office of the land. Ready to serve your people at another level. Ready for another fight.

That takes bravery, passion, and determination. With your popularity, generosity, and sense of public service, you may become the next President of the Philippines.

My plea is simple, Sir Manny. Please take a moment, stand back, and reflect on what you can do for the country at this crucial point in our history.

Filipinos have been dragged through years of a bloody drug war that has resulted in the loss of thousands of lives with tragic consequences to more than 200,000 widows and orphans. The Philippines has gained the international reputation of being one of the most hostile milieus for journalists, as attested by the Nobel Committee, bestowing the Peace Prize to the first Filipino ever to gain such recognition.

The Philippines sits helplessly as its territorial waters are usurped by a bullying CCP, enabled by a ruling class willing to sell the country to the highest bidder. Covid has sapped the country’s economy, and Pharmally has delivered the knockout punch.

Bruised and battered, the Philippines looks as moribund as those desperate times preceding February 1986, when the Marcoses were finally driven out of the country by a miraculous wave of People Power. Ironically, the son of the dictator who ravaged the country now aims for the presidency, aided by funds sequestered during those dark years of the conjugal dictatorship.

It looks like the country will never rise from this predicament. We, as a nation, have not learned our history. Yet, as if by Divine Providence, a Leni Robredo has emerged, willing and able to lead the country.

As you know, Leni is honest, civil, and compassionate. She has demonstrated remarkable skills and competence to lead the Philippines at this point.

But Leni cannot climb the mountain alone. She needs help.

You have the power and the popularity to propel Leni to the presidency.

May I respectfully submit, Sir Manny, that the fight for you now is not to run for President but to carry Leni to Malacanang? In 2028, a progressive and grateful nation will gladly return the favor.