Day of Infamy: Lessons and Legacy of Pearl Harbor Day

Day of Infamy: Lessons and Legacy of Pearl Harbor Day 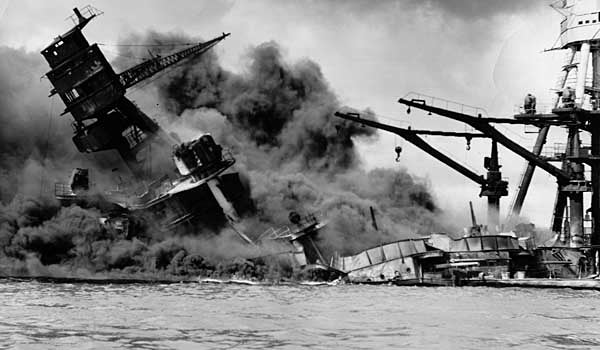 On Sunday December 7, 1941, seventy-six years ago, planes of the Imperial Japanese Navy streaked over Pearl Harbor bombing and torpedoing the American fleet at anchor.  More than 2,400 Americans were killed that day.  President Roosevelt quickly called it a “Day of Infamy.”

Pearl Harbor Day beckons us to step back and reflect not only on the “Day of Infamy,” but also, on the many other incidents in which attacks have occurred on U.S. soil.

The “Day of Infamy” was followed by several months of fear – particularly on the West coast of the United States.  Japanese submarines prowled off the West coast.  The 1942 Rose Bowl was initially cancelled but then moved to Chapel Hill, North Carolina where Oregon State beat Duke, 20 to 16.

In February of 1942, a Japanese submarine shelled the Ellwood oil refinery near Santa Barbara with its 140mm deck guns.  In June of that year Fort Stephens in Oregon was bombarded by the deck guns of a Japanese submarine.  That same month two remote Aleutian islands, Attu and Kiska, were invaded and occupied by Japanese troops.  Dutch Harbor in Alaska was bombed.

Panic swept the West coast.  Japanese Americans were shipped to internment camps and denied their constitutional rights.  This was a gross overreaction by the U.S. government, but the threat and the danger from Japan were real.

In the last two years of World War II Japan launched thousands of Fu-Go balloon bombs carrying incendiary explosives.  They hoped to set American forests ablaze.  The Jet stream transported these devices to at least fifteen America states including Wyoming and Iowa.  In May 1945 six people were killed in Oregon by a Japanese balloon bomb.

In fact, successive waves of invasions have shaped our country in countless ways. The English founded Jamestown while the Spanish held Florida and the French tried to establish settlements in Texas and Louisiana (“Nouvelle Orleans”).  The Russians colonized Alaska and even built Fort Ross in Northern California near what is now called the “Russian River”.  They occupied Fort Ross for 30 years from 1812 to 1842 attempting to grow crops that would sustain their Alaskan possession.

Even as we look back, Pearl Harbor Day is an apt time to look ahead to the future and consider potential threats to our homeland we currently face.

Seventy-six years ago the threat came from Imperial Japan. Today the threat comes from a blustering dictator in North Korea. Kim Jung Un’s threat to attack the U.S. with intercontinental weapons is not entirely without historic precedent in light Japan’s World War II Fu-Go bombs. But the potential scale of destruction it represents is. Kim is capable of exploding crude atomic devices. Two North Korean missiles have been fired through Japanese airspace. The risks of today’s escalation are palpable. Let us not forget that weapons of mass destruction led our nation into war in Iraq.

Pearl Harbor famously united public opinion in the United States.  “Remember Pearl Harbor” became a rallying cry.  A nation that was woefully unprepared on December 7, 1941 was rapidly transformed into a vast arsenal of democracy.

Seventy-six years have changed the tempo and potential devastation of modern warfare.  Kim Jung Un’s grandfather launched the Korean War in 1950 with a devastating invasion of the south.  His grandson has the capacity to launch multiple Hiroshimas.

Surveying the political landscape today, our nation seems more divided than ever.  Will we have the wisdom to recognize the threats that face us, to remain vigilant and to preserve peace in a world troubled by murderous dictators?  Will our leaders have the wisdom to meet bluster, not with more bluster, but with strength?

Christopher Kelly, an American history writer based in Seattle and London, is co-author with English historian Stuart Laycock of America Invaded: A State by State Guide to Fighting on American Soil (August 2017). Other titles by Kelly and Laycock include America Invades: How America has invaded or been Militarily Involved with nearly every Country on Earth and Italy Invades: How Italians Have Conquered the World. Kelly has also edited An Adventure in 1914: The True Story of an American Family’s Journey on the Brink of World War I.  His articles and op-eds have appeared in publications including USA Today, Investor’s Business Daily, the New York Daily News and the San Francisco Chronicle, and he has conducted more than 200 radio interviews.