'There have to be consequences:' Judge ups sentences for U.S. Capitol rioters

‘There have to be consequences:’ Judge ups sentences for U.S. Capitol rioters 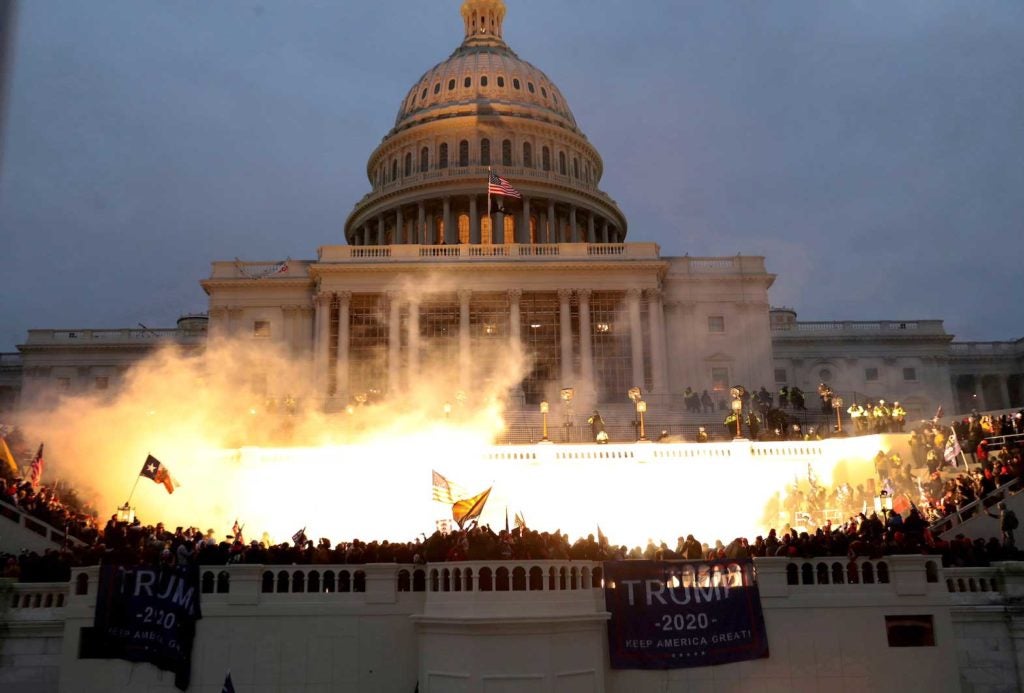 An explosion caused by a police munition is seen while supporters of U.S. President Donald Trump gather in front of the U.S. Capitol Building in Washington, U.S., January 6, 2021. REUTERS/Leah Millis/File Photo/File PhotoD

WASHINGTON – A federal judge in Washington has repeatedly sentenced people who stormed the U.S. Capitol to more prison time than prosecutors sought, saying that even people who were not violent should face consequences for joining the unprecedented assault.

In the past week, U.S. District Judge Tanya Chutkan has imposed sentences ranging from 14 to 45 days on four people who pleaded guilty to unlawful parading and picketing inside the Capitol building on Jan. 6 — a misdemeanor offense.

“There have to be consequences for participating in an attempted violent overthrow of the government, beyond sitting at home,” Chutkan said at one of the hearings.

More than 650 people have been charged with joining the Jan. 6 violence, when supporters of Republican Donald Trump fought with police, smashed windows and charged through the building in an attempt to overturn his election defeat. So far, more than 100 people have pleaded guilty, and at least 17 of those defendants have been sentenced.

Four people died on the day of the violence, one shot dead by police and the other three of natural causes. A Capitol Police officer who had been attacked by protesters died the following day. Four police officers who took part in the defense of the Capitol later took their own lives. More than 100 police officers were injured.

On Wednesday, Chutkan sentenced two cousins who breached the Capitol and took selfies while doing so to 45 days in jail.

Prosecutors had asked Chutkan to sentence each of the defendants — Robert Bauer of Kentucky, and Edward Hemenway of Virginia — to 30 days in prison.

Bissey’s friend, Anna Morgan-Lloyd, avoided jail time after pleading guilty to the same crime, receiving a sentence of three years of probation from a different judge in June.

Chutkan, a former public defender appointed to the federal judiciary by former President Barack Obama, last week sentenced another defendant who admitted to the misdemeanor charge, Matthew Mazzocco, to 45 days in prison.

That court hearing marked the first time that one of the judges overseeing the hundreds of Jan. 6 prosecutions imposed a sentence that was harsher than what the government asked for.

Chutkan is not the first judge to second-guess the Justice Department’s handling of the Jan. 6 prosecutions.

Beryl Howell, the chief judge of the federal court in Washington, has suggested prosecutors were being too lenient in allowing some defendants to plead guilty to misdemeanor offenses.

At a hearing in August, Howell said even defendants facing low-level offenses played a role in “terrorizing members of Congress” on Jan 6.

During a plea hearing, the judge asked: “Does the government, in agreeing to the petty offense in this case, have any concern about deterrence?”

So far, no judge has rejected a plea deal offered by prosecutors in a Jan. 6 case.

Almost all of the defendants to be sentenced so far pleaded guilty to non-violent misdemeanors. The Justice Department has signaled that it plans to seek much stiffer penalties for felonies.

In the case of Florida man Paul Hodgkins, who pleaded guilty to one felony count of obstruction of an official proceeding, the Justice Department requested an 18 month sentence. U.S. District Judge Randolph Moss went lighter on Hodgkins, sentencing him to eight months.