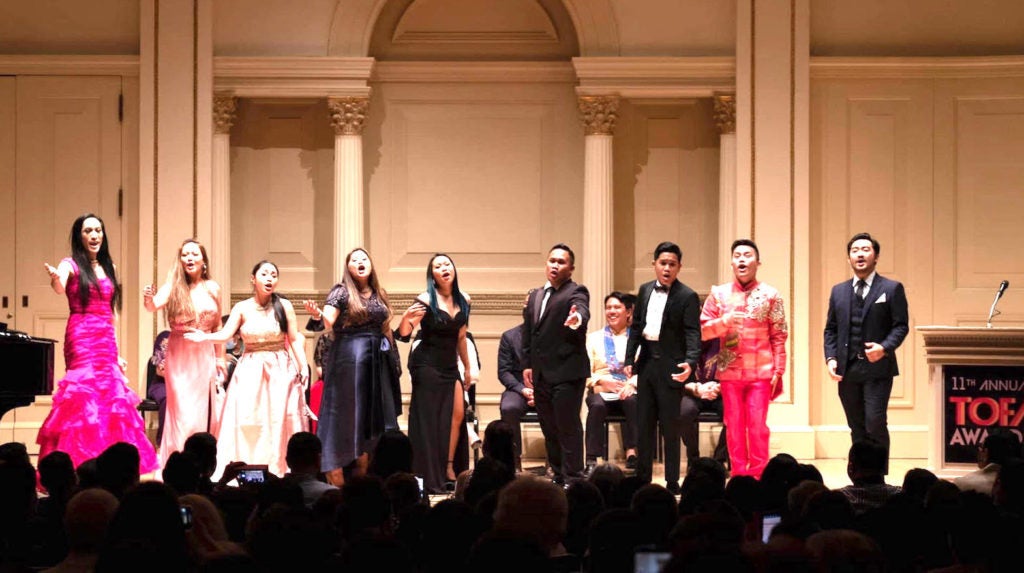 The event has become a Fil-Am community tradition in New York, this year being TOFA’s 11thseason and marking its return to Carnegie after one year in hiatus because of Covid-19.

The gala pushed through Oct. 7, 2021, with a sold-out audience dressed to the nines and did not mind wearing masks for two hours. Its presence was rewarded with a remarkably intimate evening as honorees and featured speakers paid homage to family, front-liners and the treasured Filipino heritage. 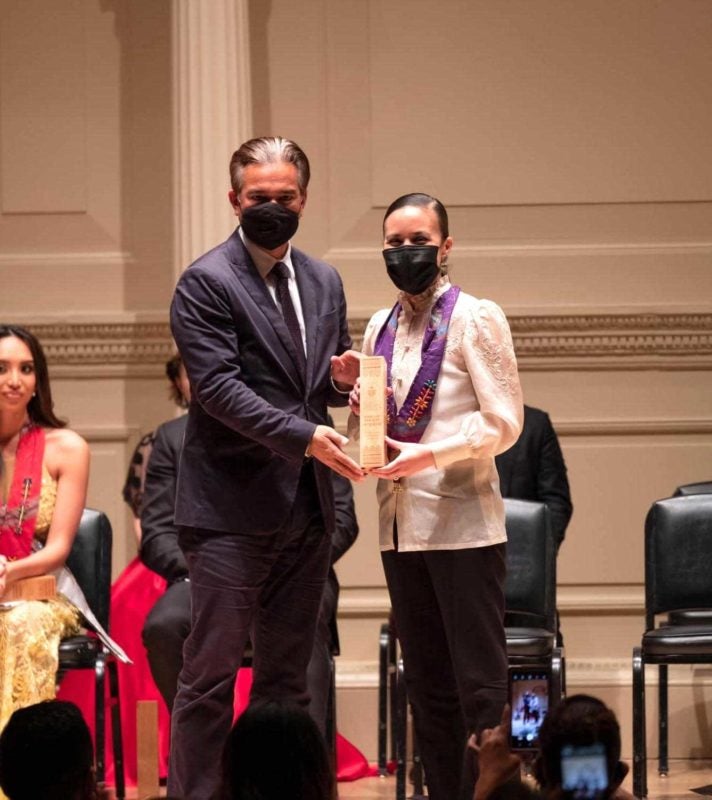 Dr. Boy Abunda, resident host of TOFA Awards, set the tone by confessing his nostalgia upon returning to Carnegie. He started hosting TOFA Awards night in 2015 but his mother’s failing health caused him to miss the 2019 show. Although he hosted TOFA’s virtual shows last year, it has been three years since Abunda took the podium at Carnegie.

“This is our moment to take pride in Filipino American achievements, to celebrate our heritage and appreciate its increasing diversity,” he said.

Elton Lugay, founder and executive producer of TOFA Awards, thanked all who participated in the search for this year’s awardees.

More than 100 nominations came from various individuals and organizations from April to August this year. The official 100 nominees will be featured in TOFA’s second coffee table book slated for publication next year.

“Sharing our stories is a good way to counter the (anti-) Asian hate that came with Covid-19 or to cope with our grief for those who passed on during this lingering pandemic. Among them are two of our past TOFA awardees, Katherine Creag and Rocky Gathercole – and many more, more than we ever imagined,” Lugay said in opening remarks.

“These stories of resilience give us hope and inspiration as we go through pandemic gloom,” Lugay added.

Rod Mercado, CEO of Financial Rescue, who was the evening’s first featured speaker, paid tribute to the countless front-liners in the Fil-Am community, from the doctors and nurses to police, fire and EMT service personnel to grocery workers, teachers and other essential workers.

“By rising up to face what may seem like insurmountable challenges, these heroes of the coronavirus pandemic have demonstrated what it means to be of service, to act out of love, and provide an example of how to be a positive force for good in the world… They’ve shown us the best of humanity and have revealed a secret truth – that we can all tap into our own inner superhero through the power of love and service to others,” he said.

Dr. Dely Po Go, TOFA’s 2021 awardee for health care, accepted the award on behalf of Filipino registered nurses (RNs) in America, who account for about half of the reported deaths among RNs since the pandemic started, according to National Nurses United. She revealed that some retired nurses in the community returned to service during the pandemic “because they cared enough to help out” despite the risks it posed to their own safety. 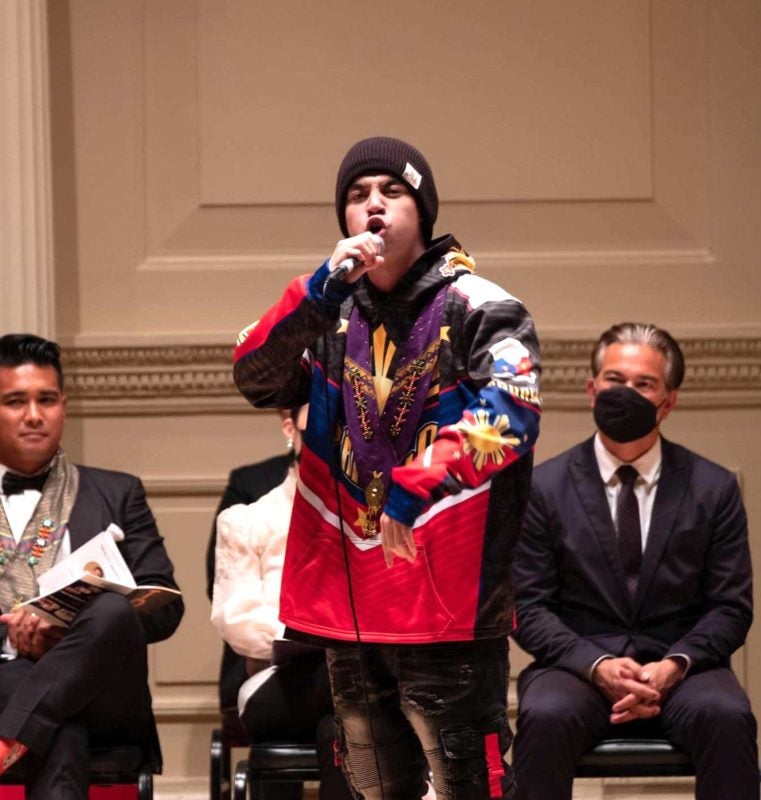 EZ Mil performs his sensational single “Panalo” to a delighted crowd who gave him a standing ovation. JOSHUA CONCEPCION

Because of Covid-19 restrictions imposed by the venue, many of this year’s TOFA honorees could not walk up the stage to receive their trophy and make a speech. Instead, one speaker was selected to represent a batch of honorees. The program had five awarding ceremonies to acknowledge this year’s 25 honorees.

Jordan Andino, TOFA’s 2021 honoree for Food and Restaurants, spoke of his love for Filipino cuisine and goal to bring it to all corners of the world. “Every day, whether it’s through my restaurants Flip Sigi, TV shows, appearances, social media, events, and even brand endorsements, I try to ensure that people who have never tried Filipino cuisine are exposed to the intense flavors, variety of ingredients, and love and passion that we all put into our hospitality and gastronomy,” he said in his acceptance speech.

Miss Nevada Kataluna Enriquez, who made history as the first transgender woman to qualify for the Miss USA beauty pageant, received the 2021 TOFA award for LGBT advocacy. She shared the highs and lows of being transgender, underlining the importance of self-love and using one’s voice.

Enriquez is going to Tulsa, Oklahoma next month to officially represent Nevada in the Miss USA pageant, but also to stand for minority and LGBT+ communities.

For United States Air Force (USAF) Undersecretary Gina Ortiz Jones, who first made history as the first gay woman of color to seek public office in Texas and this year, emerging as the highest-ranking Filipino American in the Biden Administration, TOFA night was the occasion to pay homage to her mother, Victorina Medenilla Ortiz.

Jones revealed that her mother immigrated to the United States 43 years ago and raised two daughters as a single mom in San Antonio, Texas. Ortiz made it a point to remind her daughters to give back to the country that has given them so many opportunities..

“I know this sense of giving back and serving runs in our Filipino DNA.  I see it everywhere I go in my Air Force travels. There is an immediate connection when you see someone who looks like you. That connection becomes even more powerful when you realize your opportunities are limitless by seeing success within your own culture. Tonight, we celebrate those limitless opportunities, but we know there is still work to do,” Jones said in her keynote speech.

“It is essential we continue to recognize the distinct Filipino pride in our country, our accomplishments, and ultimately our shared success—not just in October during Filipino American Heritage Month, but every single day,” she added.

California Attorney-General Rob Bonta, the first-ever Filipino American legislator in California history who became the first Filipino and the second Asian American to become the state’s attorney-general in April this year, noted the community’s rising relevance in mainstream America.

“Filipino Americans are making a difference,” he said. “After years of fighting for recognition, today we are rightfully taking our seat at the table – from corporate boardrooms, legislative chambers, nonprofit institutions, to the halls of justice. We are strong. We are powerful. I’m proud to stand alongside so many Filipino American change-makers tonight as we celebrate our community’s boundless contributions.” 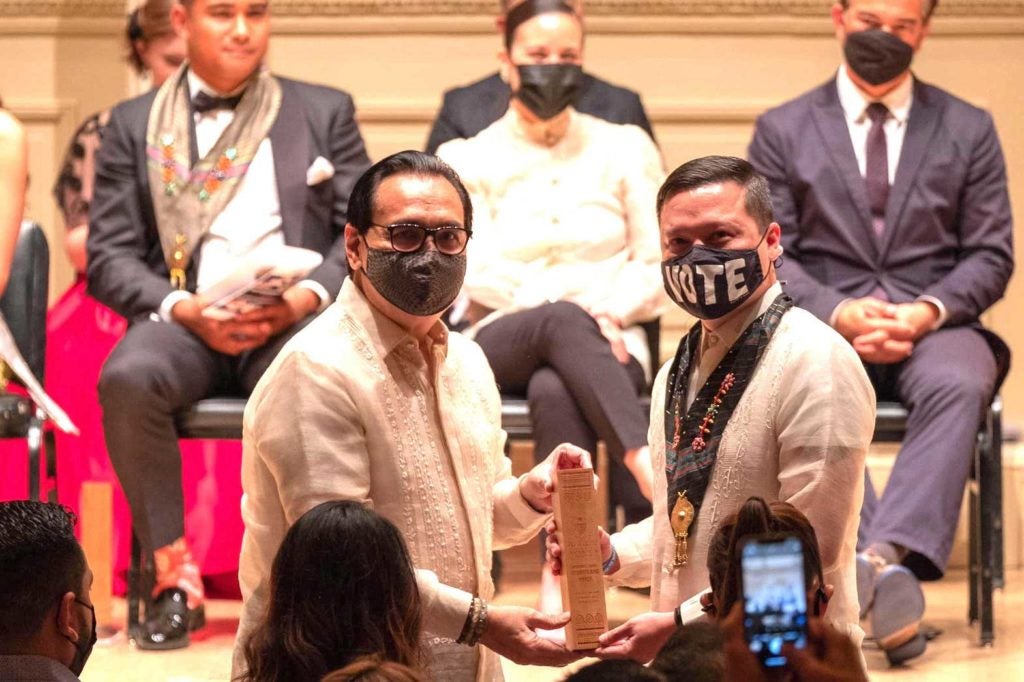 Olympic gold medalist Lee Kiefer shared a special memory from one week before she left for Tokyo for the Olympic fencing competitions. “My Lola, 95 years old, 5 feet tall, the most devout Catholic in the land, called me and gave me the most-hyped inspirational speech about not being nervous, believing in myself, and fighting hard. I took that with me to the competition, and went out there and did it,” she told Fil-Ams at TOFA night.

“Like most people here, I believe my family is the heart behind my success, and I think that the pandemic gave me the opportunity to reflect on that value and practice gratitude. There is no prouder feeling than standing on the podium for my family and the Philippines. Thank you for believing in me,” said Kiefer, the first Filipino American and Asian American to take the Olympic gold medal in women’s individual foil fencing and the first-ever in the U.S. to score the gold in the sport’s individual category.

Dr. Francisca Velcek, TOFA’s 2021 Heritage awardee, explained in two sentences the value of a TOFA award. “I have received numerous awards in my long career spanning five decades in America, but this award is very special. It is a recognition of the contributions of the Filipino people to our adopted country, the USA for which I am extremely grateful and honored,” she said. She also shared her journey from farming barrio lass in Ilocos Sur, Philippines to internationally recognized leader and mentor in the field of pediatric surgery. 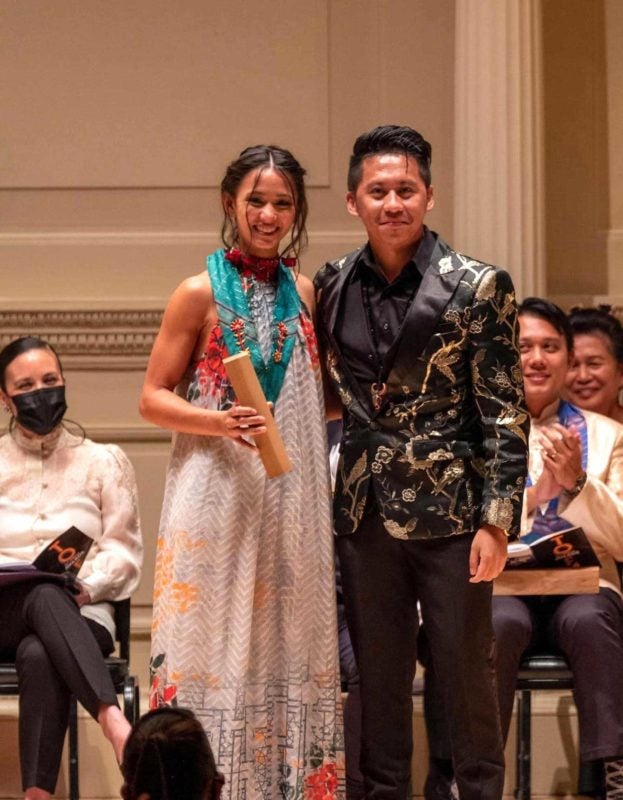 Brendan Flores, national chairman of the National Federation of Filipino American Associations, emphasized how “katatagan” or resilience differentiates Filipinos in America. “No matter what they throw at us, we will continue to stand strong, give our all, and be resilient. This type of resilience is what we contribute to this country,” he said.

Community leader Loida Nicolas Lewis led the entire congregation to cheer for TOFA, its awardees and organizers, and dropped quotes from her beloved late husband Reginald F. Lewis and Winston Churchill. When Reginald Lewis engineered the billion-dollar buyout of Beatrice Foods 35 years ago, his vow was to “keep going no matter what,” she recalled.

Entertainment for the 11th Annual TOFA Awards was no less electrifying despite the muted festivity. EZ Mil, the hip-hop artist who has made a huge impact on social media and pop culture since bursting on the scene last January, brought the house down with a fierce performance of his hit song “Panalo.”

This year’s TOFA was a three-night celebration. An after-party was held at the Triad Theater Oct. 8 featuring Jaya and Cedric Escobar. The crew then headed to Boston for the Oct. 9 concert of Jessica Sanchez featuring Temi Tecson and this reporter (Rasmin Diaz), both regulars of the TOFA Performing Artists, at the Hard Rock Cafe.

Also over the weekend, Lewis hosted a congratulatory party for this year’s TOFA awardees at her vacation home in the Hamptons.