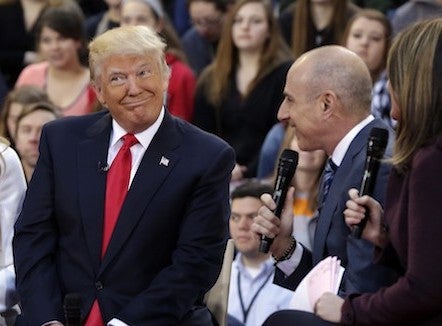 Matt Lauer kept losing his hair, but he never lost his job–not until he lost his sense of judgment, self-control and credibility. Too bad he’s not president of the free world. He’d still have his job.

But now no one cares to ask, “Where in the world is Matt Lauer?”

Before this week, no one would have said, “Buying sex toys.”

When I heard the news, I did wonder about former “Today” host, Anne Curry, the stalwart Asian American journalist who was reportedly bullied off the show by Lauer. Before you shed a tear for Lauer, look at him sitting next to a tearful Curry on her last day on the show in 2012.

I nearly cried again for Curry, who broke through the network barriers, and survived as long as she could before saying, “I’m sorry, I couldn’t carry the ball over the finish line, but man, did I try.”

I never met Lauer but we competed for the same job once. I was called in for a weekend job at the local NBC station in New York after I left NPR. But I knew it was just a courtesy. They had their eyes on Lauer, a local New York talent, who got the job. People knew him as humble then (he had been a tree trimmer). But that’s not who he became, especially not in 2013 at the Winter Olympics.

So where is Matt Lauer now?

Perhaps he’s off in a shameful corner rehabbing his sense of humility, while re-reading his apology statement which does say “sorry” but still asserts that some allegations of sexual harassment are “untrue or mischaracterized.”

One has to make sure about apologies these days after the New York Times reported that Donald Trump tells aides and friends behind closed doors that he regrets ever apologizing for starting that racist birther conspiracy against President Obama. That’s despite publicly admitting Sept. 16 last year that “President Obama was born in the United States, period.”

Oh, and that apology for his “pussy grabbing” comment on that “Access Hollywood” tape? Trump now says maybe it wasn’t his voice.

We don’t expect news hosts or presidents to be saints. We just don’t expect them to be sexual predators and liars. Or both.

We do need them to be trusted. Or at least, in the case of news hosts, like a family member; (You wouldn’t really want to be Don Jr. would you?)  Family, after all, is the major conceit of morning TV. As they watch us, we watch them while we’re all barely awake, bathed or clothed. The sole virtue of the morning television news show is to bring us back to life and reassure us that no matter what, the world is still close to what it was on our last waking moment.

But after this week, that’s no longer true.

Things are not okay. Not from day to day. Not in journalism, politics, nor even in this great experiment known as our U.S. democracy.

We are seeing a generational change that likely I nor my children will be able to outlive.

Some of it is good of course. But most of it isn’t.

A good sexual reckoning is actually healthy for our democracy, as I wrote last week.  Now, with the firing of Lauer, and Charlie Rose the week before, the fall of another arrogant man of power who has abused our trust continues.

Of course, it could be an arrogant woman of power too as I mentioned in my previous column.  Or even a person of color (e.g., John Conyers, Russell Simmons).  Both women and men, of whatever race or ethnicity, equally deserve a work situation that’s free of harassment.

The key word in all this is power.

It’s the only reason that the current reckoning has not applied to Donald Trump. Maybe in time.

But Trump is all about power now.

While the news icons Lauer and Rose have fallen, only Trump remains above it all because of the office he holds.

As the anchor of the free world, he’s wielding his power in such an unprecedented, and un-presidential way.

What president before Trump has been so reckless with his words and tweets?

Trump began with a bang as the Lauer news broke. “Wow,” was his first word on his tweet. But Trump quickly made it an attack on NBC News suggesting its leaders should be fired for all their “fake news.”

Fake news? Trump too often acts like some fake president, who doesn’t take the position seriously.  Not much of what he does ever seems dignified enough for the office. He really is like no president before him. And that’s not a good thing.

Trump says whatever he pleases, making up his own truth as he goes, hoping childishly that “saying so makes it so.”  It’s dangerous given the wide berth of respect and credibility that comes with his office.

Much of that is in a state of decline, especially after this past week.

One British politico went as far as saying Trump was either “racist, unthinking or incompetent – or all three.”

With hate crimes against Muslims everywhere on the rise, especially in this country, add another word to the list. Un-American.

Trump being Trump no longer merits a pass. He’s president and should act like it.

Instead we get the Trump who joked at a Native American ceremony honoring the WWII Code Talkers by referring to Sen. Elizabeth Warren as Pocahontas.

Filipino Americans should understand how this transgression is just the same old privileged perspective of racism, only this time fully embodied by the President of the United States.

If he saw a Filipino American he didn’t like, can you imagine what Trump would hurl at them? Call them  Pacquiao?  Imelda? Name calling is part of Trump’s bullying style.

With his tweets and public utterances, the president is simply off the rails when it comes to the truth train. It’s even more dangerous when public policy is directly on the line.

This week it was.

It began with Kim Jong-Un’s missile test on Monday. Since the Trump inauguration, while Trump has talked tough and called Kim “Rocket Man,” the North Korean leader has stepped up his game with 23 missile launches; 16 missile tests; 1 nuclear test.

Kim continues to call Trump’s bluff, this time testing a weapon that appears to be able to reach the U.S.  This week, the president could only point to economic sanctions as his only answer. Diplomacy? After Trump has dangled the possible early departure of Sec. of State Rex Tillerson, once seen as an administration grown up, and an advocate of a more diplomatic approach, who knows what Trump has in mind for his reality show government?

Do you see nuclear war in our future? We may live to regret ever being critical of mere Twitter wars.

The biggest change before us this week may be to the very funding mechanism of our democracy, the U.S. tax code.

Desperately needing a legislative victory, Trump misrepresented, if not outright lied, at his Wednesday rally in Missouri, when he said he and his rich friends would be hurt by his tax reform package. Hurt so good, maybe.  Every unbiased review of the plan shows that the winners would be corporations and rich individuals, while the losers would be those making $75,000 or less.

Deductions for average folks would disappear or be reduced. Loopholes for the rich will remain. And corporate cuts will be permanent vs temporary cuts for individuals.  The upshot: businesses will have even more money, but where’s the incentive to create new jobs?

Trickle down theories have all been discredited in the past. More so, now.

But that’s not what the deluded president of the United States tells the country in his “non-braggadocious” way.

“There has never been a 10-month president who has accomplished what we have accomplished,” Trump said to cheers at the Missouri rally.

He’s actually telling the truth if he really wants to boast about having a near blank legislative record.

In his ramble, Trump was revealing. At one point he talked about how this tax plan would actually hurt him, but he just shrugged it off.

It doesn’t hurt him. And he really doesn’t care.

The only one I hear talking truth is the great but ailing Asian American leader  from Hawaii, Sen. Mazie Hirono, who was on CNN saying to scrap the current bill and  “start over.”

She said the Republican plan gave the biggest tax breaks to the rich and was being done “on the backs of the middle class.”

Hirono, still fighting for the average American despite fighting kidney cancer, also criticized how the Republicans were essentially gutting the Affordable Care Act. The bill does away with the so-called “individual mandate,” the mechanism that actually keeps health care costs down by covering the largest possible pool of insureds. Without the mandate, ACA rates will be unaffordable and leave millions uninsured.

But that’s just not the truth you’ll hear from Trump.  As he said, he’s the president and he just doesn’t care. He’s rolling back the last 8 years, the last 50 years.

The Trump Tax plan will irreparably change our country, hastening the end of the American middle class, as we know it, and turn government into a corporate tool.

Think of it as the financial harassment and rape of ordinary people in America.  They will suffer from the estimated $1 trillion in deficits non-partisan analysts say will be generated by the Trump plan.

Although it looks like most of us won’t be brave enough to speak out against it, until it’s too late.

Take it all together, and this week shows how Trump continues to view the presidency as a reality show played for ratings.

He’s making the case on his own that he’s unfit to serve as president for all Americans, let alone the world.