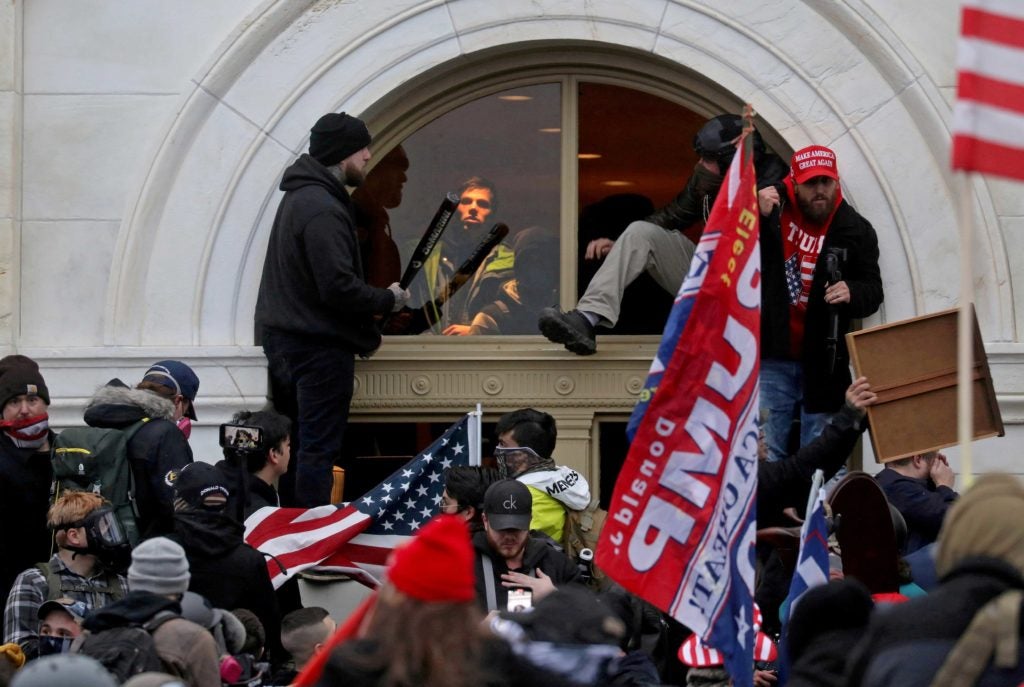 A mob of supporters of then-U.S. President Donald Trump climb through a window they broke as they storm the U.S. Capitol Building in Washington, U.S., January 6, 2021. REUTERS/Leah Millis/File Photo

The White House on Friday formally blocked an attempt by Donald Trump to withhold documents from Congress related to the Jan. 6 attack on the Capitol when he was U.S. president.

Press secretary Jen Psaki said President Joe Biden had authorized the National Archives, a government agency that holds records from Trump’s time in office, to turn over an initial batch of documents requested by the U.S. House of Representatives Select Committee investigating the riot.

“The president has determined an assertion of executive privilege isn’t warranted for the first set of documents from the Trump White House that have been provided to us by the National Archives,” Psaki said.

Executive privilege is a legal doctrine that protects the confidentiality of some communications between White House officials.

Trump said the Biden administration was using the investigation to undercut his future political prospects.

“This is about using the power of the government to silence ‘Trump’ and our Make America Great Again movement, the greatest such achievement of all time,” he said in a statement.

Throngs of Trump supporters stormed the seat of Congress on Jan. 6 in a failed bid to prevent lawmakers from certifying Democrat Biden’s presidential victory. More than 600 people now face criminal charges stemming from the event.

The Jan. 6 Select Committee has threatened criminal contempt charges against Steve Bannon, the longtime Trump adviser who is refusing to cooperate with the inquiry.

“We will not allow any witness to defy a lawful subpoena or attempt to run out the clock, and we will swiftly consider advancing a criminal contempt of Congress referral,” said Representatives Bennie Thompson and Liz Cheney, who lead the committee.

Bannon on Thursday told the committee he would not comply with a subpoena it issued last month.

A lawyer for Bannon, Robert Costello, said in a letter to the committee that the refusal was due to Trump’s claim that he can invoke executive privilege to block Bannon’s testimony.

Legal experts have said Trump, as the former president, cannot lawfully use executive privilege to block subpoenas issued by the select committee.