“You are my sunshine, my only sunshine. You make me happy when skies are gray,

You’ll never know dear how much I love you. Please don’t take my sunshine away.”

As a child, Tia Katrina Taruc was lulled to sleep by her mother, Tina, to that song, which was also the latter’s declaration that she was her life. From then on, Tia knew what she would be when she grew up –a strong woman like her mother, who is a painter.

“My mom was a victim of domestic violence when I was growing up. Because of this, we didn’t lead a very comfortable life,” recalls Tia Katrina Taruc-Myers, a lawyer and the founder of the Alipato Project, the first organization in California to represent survivors of domestic violence in tort actions against their batterers.

Harassment did not only come just from a partner or spouse, but also from people around them.

“Sometimes our landlord would harass my mom for paying the rent late. Sometimes, we wouldn’t have enough money for full meals. But my mom has such a vibrant and positive attitude that I never felt hopeless,” says Tia Katrina.

Instead of fairy tales, Tina told her daughter stories about “Alipato,” who was born in San Luis, Pampanga. Alipato was nom de guerre of Luis Taruc, Tia Katrina’s great-grandfather. He was the founder of Hukbalahap, the leftist guerilla group that fought the Japanese during World War II.

“Lolo Pop spent time in jail for fighting for his and his people’s rights. Even as a child, it occurred to me the existence of unjust system that imprisoned people like him but not people who beat women,” Tia Katrina says.

Born in New York from Filipino immigrant parents, Tia Katrina knew early on what immigration was all about. From New York, they moved to Northern California.

When she was nine, Tia Katrina and Tina moved to Angeles, Pampanga, and lived with her Lola Teresita Taruc. Tina had left another abusive relationship.

In Pampanga, Tia Katrina was exposed to rural life and Kapampangan culture and language. Watching her mom teaching Lolo Pop how to use the computer is a vivid memory she cannot forget.

Tina went back to the US, leaving the 12-year-old Tia Katrina with another aunt.

Since Tia Katrina’s Aunt Carol is an obstetrician-gynecologist, Tia Katrina learned how to take patients’ blood pressures using the manual sphygmomanometer. Sometimes she was also at the delivery room telling the patients to breathe and push.

Tia Katrina went back to the US when she was 13. She graduated from University of California Berkeley Law in 2011. While at the law school, she worked on an asylum case based on domestic violence and political persecution.  She realized the need for lawyers who are willing to take on civil suits against domestic batterers or abusers.

“When I learned that domestic violence survivors can sue their batterers for money, I realized right away how that remedy could be so much more helpful than throwing batterers in jail, which shows very little evidence of rehabilitation. Suing for money warns batterers that their misconduct will come at a substantial price,” Tia Katrina explains.

In 2012, Tia Katrina founded the Alipato Project. Alipato in Tagalog means the “spark that spreads the fire.” She also serves as the project’s executive and legal director. 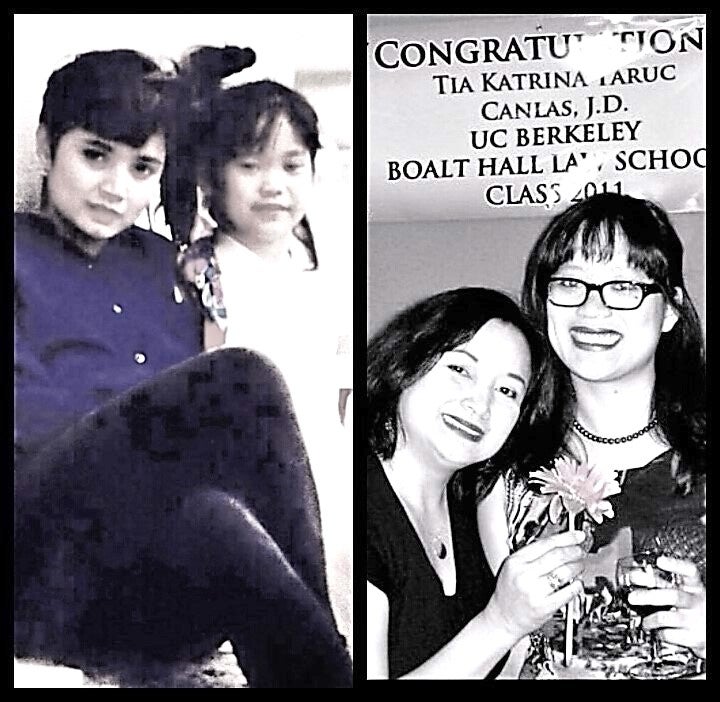 Tina Taruc and Tia Katrina, then and now. CONTRIBUTED

Alipato Project is composed of men and women from different cultural and professional backgrounds serving as volunteer attorneys, board members and advisory board members.

True to its meaning, Alipato is spreading the fire of awareness in the Berkeley area.

“Our goal is to end domestic violence everywhere, one zip code at a time. We’re starting here at home, in Berkeley’s 94703 zip code,” Tia Katrina stresses.

Alipato sues batterers. Presently, they have two programs – a weekly legal clinic in which they provide free legal advice and referrals to Domestic Violence (DV) survivors in their neighborhood; and a personal injury program, which is the first and only nonprofit program to provide direct legal representation to survivors of domestic violence in civil suits against their batterers.

“Domestic violence is actually all about control, and abusers use very sophisticated strategies to control their victims. Those strategies, such as gas-lighting [a form of manipulation to sow seeds of doubt], financial abuse, isolation and emotional abuse, make it close to impossible for victims to leave an abusive relationship. Victims are at most risk of being killed when they try to leave the relationship. What might look like a weakness to outsiders could actually be a very calculated decision to stay alive.”

Women from marginalized communities find it hard to leave an abusive relationship because they have limited options in terms of livelihood and legal status. 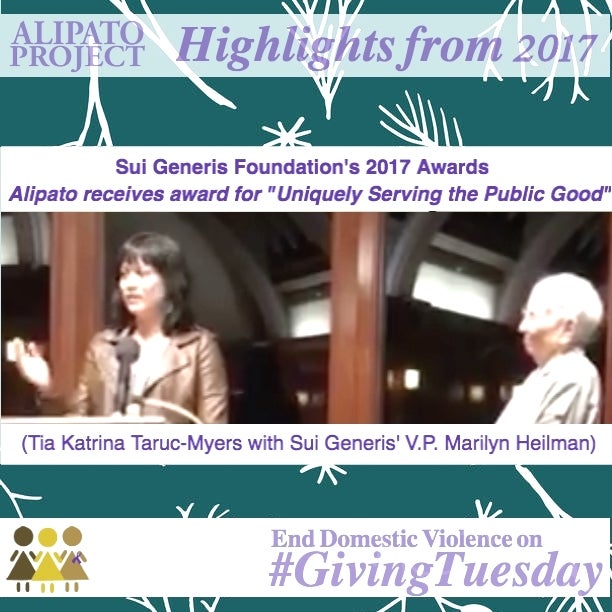 “To help us fund our groundbreaking work, we published the Radical Feminist Coloring Book, which we gift to donors of the Alipato Project,” Tia Katrina adds.

On July 18, 2017, Tia Katrina and her client Kendra Scott filed a suit against the latter’s former fiancé, San Francisco 49er Ray MacDonald, for the physical, mental and verbal abuse during and after their relationship.

Tia Katrina was also slapped with a lawsuit but it did not hinder her advocacy: A multi-millionaire real estate mogul filed a lawsuit against Alipato which represented the mogul’s ex-wife. The court later dismissed the suit.

“We live in a country that has a long history of racism, genocide and violence against women. The United States wasn’t built for people like us, but that shouldn’t stop us from trying to make it a better place for the black and brown folks that live here now,” Tia Katrina says.

Survivors of domestic violence are encouraged to contact [email protected] to pursue civil action against the batterer, or to help them find services.