It was never too late for her to become an artist 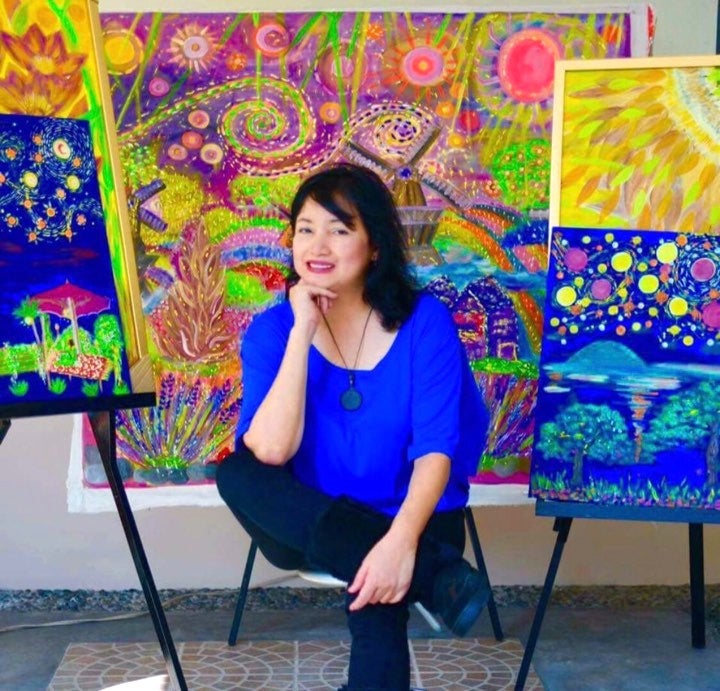 It was the month of May in 2013, and in the Philippines flowers were in bloom at that time of the year. In California, meanwhile, it seems eternally summer, and flowers dotted Maria Cristina Taruc’s garden. She depicted these on canvas. Every stroke of the paintbrush gave life to dahlias, sunflowers and every imaginable flower. Taruc, also known as Tiinz, nourished them with memories of her childhood back in Pampanga and Las Piñas, with her longing for her grandfather, Luis, who loved nature.

And the painting “Flores de Mayo” came to be.

Tiinz, in her 50s, never thought that her therapy to ease homesickness would take her to another phase in her career.

Tiinz is no stranger to the limelight. Besides being the grandchild of the founder of Hukbalahap and a WWII hero, Luic Taruc, she was Miss Pampanga in 1979. 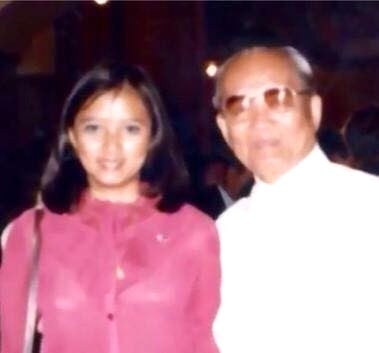 Tiinz and her grandfather, the late Luis Taruc. CONTRIBUTED

“I was set to make a movie with Gabby Concepcion. We already met and discussed my role as Roxanne Abad Santos, who died of cancer,” Tiinz shares.

However, things did not go as planned. Luis Taruc wanted her to finish her studies first. Tiinz was a second-year tourism student at the University of the Philippines then.

In 1982, when she was 22 years old, Tiinz went with Luis, then-Agrarian Reform Adviser, during the latter’s visit to Washington.

They also visited New York City. Tiinz fell in love with a Kapampangan student she met in Los Angeles. After their wedding the couple moved to New York. Not contented with just being a “wife,” Tiinz applied at G. Joannou Cycle, an emerging bicycle company in New Jersey.

“I applied bringing with me my portfolio that was actually a photo album,” she laughs.

The company sent her to study graphic design at the Parsons School of Design.

Tiinz says that the arts and design were male-dominated. Fortunately, despite being one of the few women in her class, and an Asian, her designs were always chosen as the best examples.

“Even then I was not traditional. I made original designs of bicycle stickers, scooters and bike logos. I was already into neon colors,” explains Tiinz. After four years, she left her job and moved to California with her daughter.

Coming from a family of doctors, Tiinz has no idea where she got her gift in art. Yet her family supported her when she studied tourism and later graphic design.

As a student in Holy Family Academy in Angeles, Pampanga and St. Joseph Academy in Las Piñas, Tiinz was always the president of art clubs.

In San Francisco, she worked at HOK, the largest architectural firm in the world as construction administrator. She eventually moved to Los Angeles and worked as cost analyst at DMJM, the largest engineering firm. She retired last year.

In 2013, she took to her brushes, paints and canvases and started painting.

“It was a hobby to while away boredom and sometimes sadness that come at some point in our life. I set up a canvas and paint, paint and paint,” Tiinz says.

Tiinz says it was spontaneous at first. She would paint any time whenever something struck her imagination. In a year, she was able to paint 200 pieces.

She does not abide by a definite time to paint.

“Even in the middle of the night, I wake up and start putting my thoughts in the canvas,” she says.

Coincidentally, Tiinz confides that she learned to speak fluent Kapampangan also in America.

“My Lolo Luis would speak to me in Kapampangan, and I replied in Tagalog or English. So, it’s only in America that I fluently speak Kapampangan.”

Tiinz started posting photographs of her paintings on social media, and a friend noticed them. She was invited by a friend to do a show at Museo ning Angeles in April-May 2014. Since then she has had exhibits in Manila and Anaheim.

“I’m an Impressionist. Many say that they see Van Gogh, Monet and Gustav Klimt in my work,” Tiinz says. She believes that her Impressionism was influenced by her first visit to the Louvre Museum in Paris in 1980. 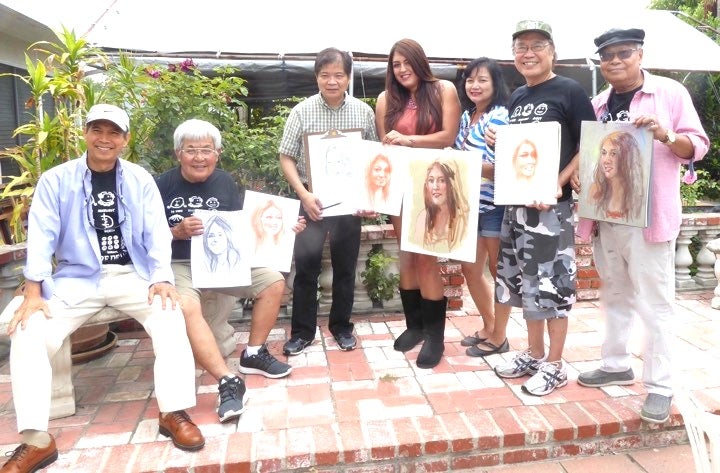 She is the only woman member of the Tuesday Club, a group of Filipino American painters in California that includes “maestro” Rafael Maniago. The group also includes Cesar DeVera, Bienvenido Sibug, Magoo Valencia, Ed Gumamit, Vics Magsaysay, Ola Dela Fuente and Anton Magsarili Reyes. They are also her mentors.

“I don’t sketch with pencil. I directly paint what comes into my mind,” Tiinz explains.She is known for her koi fish, flowers and mother-and-child abstract paintings.

Age is not a hindrance

Before Tiinz had a stroke she produced at least three paintings in varying sizes; now she only produces one painting a day or sometimes a week.

The year 2017 also proved fruitful for Tiinz. In February she bagged a major award in a painting competition at the Art Center near Disney Anaheim, California for her “Kissing Dragon Koi.” She also won first place at the Lakewood Art Group best of show and two second place awards in May 2017.

“I started painting seriously only four years ago. No one can stop you if you want to do anything. There is no limit to do the things that you love,” she declares

Tiinz Taruc will have an exhibit together with Anaheim Art Association on July 3-31, 2017 at the Art Center Gallery, Disneyland. She is also among the group of Filipino American artists who will join the art exhibit “Ugnayan sa Sining” presented by Filipino American Service Group, Inc. (FASGI) and the Consulate General of the Philippines, LA on July 14-28 at the Historic Filipinotown in Los Angeles. She is also set to do an exhibit at the Ayala Art Museum in 2018.

LATEST
Robredo hits gov’t tendency to buy PPEs from China: PH tailors can make it
Dioceldo Sy bares real reason why he’s selling Blackwater franchise
What Jennylyn Mercado learned in her 17 years of being a Kapuso: Fight for your dreams, make a stand
Flatten the curve or ‘fatten’ the curve? quips Sotto in apparent rap vs Duque
Owner puts Blackwater up for sale for P150 million
MOST READ
usa Kellyanne’s part-Filipina daughter, 15, scorches Trump
usa Filipino bus rider in Vancouver told to ‘speak English here’
usa Filipino in NY kills own mother, a Covid survivor
usa Why leaders who terrorize people need ‘anti-terrorism’ laws
usa Police in So. California arrest woman who harassed Asians
usa Hundreds of Filipinos at risk in California have yet to be tested – survey
usa Anti-Terror Act is itself an act of terror