LOS ANGELES — Filipino American theater makers are a moving force in this year’s Pass the Mic Festival as it focuses on Asian American and Pacific Islander voices.

Out of the five short plays that will be showcased, four are directed by Fil-Ams with one written by a Fil-Am with a Fil-Am cast.

Rodney To was named IAMA Theatre’s associate artistic director last year. “It was an honor. On some level, all the work I’ve been doing in the arts as an actor, director, producer, etc., has led me to this position,” he says.

“I know why I’m here. I am confident that my work-life experience more than qualifies me for the job, but more than that, I am excited to bring my perspective as a person of color to the administrative and producing arm of a company as dynamic and impactful as IAMA .

“I look forward to pushing for even more diversity in all areas of their work, introducing them to marginalized artists and stories and also … serving as a leader in ensuring the work is reflected not just in the shows we produce, but also that it becomes embedded in the DNA of IAMA .”

Nicholas Pilapil was offered the director position of the theater company’s Under 30 Playwrights Lab also last year. He went to work right away helping select the 2021-22 writing group. “The biggest responsibility is to be a mentor to these young writers,” he says.

The lab was what provided the space and opportunity for Pilapil and To to begin an artistic collaboration. When Pilapil was in the writing lab’s inaugural batch, his directing partner was To, who then brought in Fil-Am actor George Salazar to work on Pilapil’s play.

“My plays before then typically explored a general Asian American experience. Rodney and George inspired me to make the main character in ‘The Bottoming Process’ Filipino.” They asked me, “Why isn’t he Filipino?” So, I actually rewrote a lot of the character’s trajectory to reflect a Filipino experience.”

Pilapil recounts his time learning in the lab as one of his favorite experiences as a playwright. In addition to the support from the theater and from artistic director Stefanie Black, he says the opportunity to work fellow Fil-Am theater makers “inspired me to start exploring my relationship to my Filipino identity and figuring out how I can put that into my work as a playwright.”

Pilapil believes that while theater can “address issues that plague us, like Asian Hate” he wants to ensure that the focus in his works remain on “the people, not the issues.”

In “I’ve No Regrets,” while the main character is a hate crime survivor, it serves as jumping off point for other topics. “The story is about her relationship with her grandson. And him learning about what it means to be Filipino and how being Filipino shapes you as an American.” 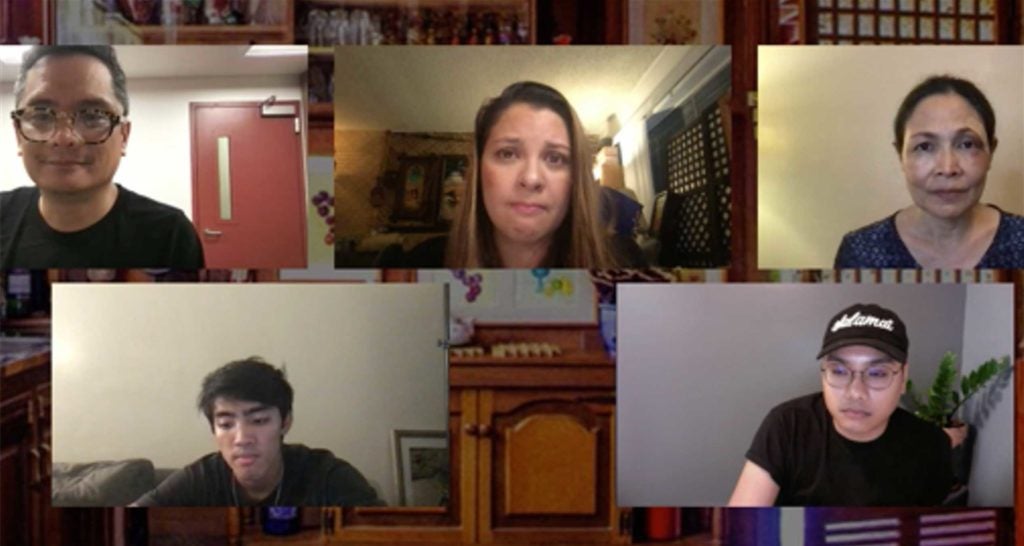 He relishes the opportunity to once again work with Fil-Am theater makers. “I love it! I’ve never worked on a play with all Fil-Ams in the room. I feel lucky. I feel grateful that IAMA made it happen without compromise.”

“The audience will either not understand or just recognize the intention and love behind the delivery of the language.”

“When I’m with Filipinos, I always feel like the least Filipino person in the room. I don’t understand or speak Tagalog, I’m not accustomed to many of the traditions. Even growing up, my family teased me for being ‘too white.’

“I was scared that the cast would see that my Tagalog was translated by Google. They didn’t. But what I loved about working with this team is that the actors added all those little gestures and intricacies that are unspoken but are part of speaking Tagalog.”