Covid deaths in rural U.S. more than twice the rate in urban areas

Covid deaths in rural U.S. more than twice the rate in urban areas 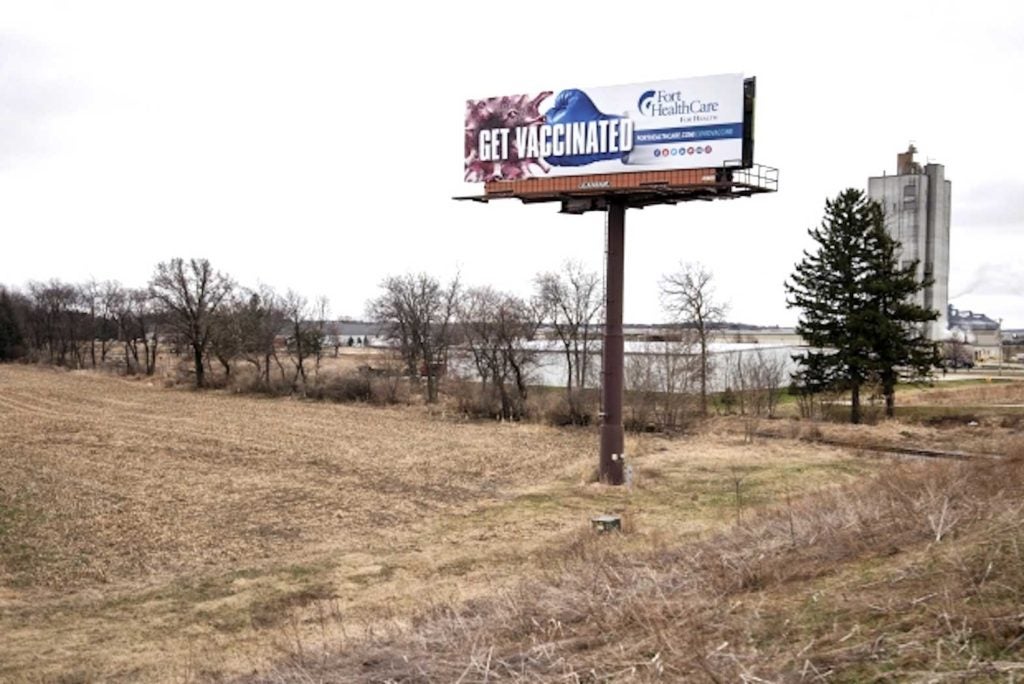 Rural Americans are dying of Covid at more than twice the rate of their urban counterparts — a divide that health experts say is likely to widen as access to medical care shrinks for a population that tends to be older, sicker, heavier, poorer and less vaccinated.

While the initial surge of Covid-19 deaths skipped over much of rural America, where roughly 15% of Americans live, nonmetropolitan mortality rates quickly started to outpace those of metropolitan areas as the virus spread nationwide before vaccinations became available, according to data from the Rural Policy Research Institute.

Since the pandemic began, about 1 in 434 rural Americans have died of Covid, compared with roughly 1 in 513 urban Americans, the institute’s data shows. And though vaccines have reduced overall Covid death rates since the winter peak, rural mortality rates are now more than double urban rates — and accelerating quickly.

In rural northeastern Texas, Titus Regional Medical Center CEO Terry Scoggin is grappling with a 39% vaccination rate in his community. Eleven patients died of Covid in the first half of September at his hospital in Mount Pleasant, population 16,000. Typically, three or four non-hospice patients die there in a whole month.

“We don’t see death like that,” Scoggin said. “You usually don’t see your friends and neighbors die.”

Part of the problem is that Covid incidence rates in September were roughly 54% higher in rural areas than elsewhere, said Fred Ullrich, a University of Iowa College of Public Health research analyst who co-authored the institute’s report. He said the analysis compared the rates of nonmetropolitan, or rural, areas and metropolitan, or urban, areas. In 39 states, he added, rural counties had higher rates of Covid than their urban counterparts.

“There is a national disconnect between perception and reality when it comes to Covid in rural America,” said Alan Morgan, head of the National Rural Health Association. “We’ve turned many rural communities into kill boxes. And there’s no movement towards addressing what we’re seeing in many of these communities, either among the public or among governing officials.”

Still, the high incidence of cases and low vaccination rates don’t fully capture why mortality rates are so much higher in rural areas than elsewhere. Academics and officials alike describe rural Americans’ greater rates of poor health and their limited options for medical care as a deadly combination. The pressures of the pandemic have compounded the problem by deepening staffing shortages at hospitals, creating a cycle of worsening access to care.

It’s the latest example of the deadly coronavirus wreaking more havoc in some communities than others. Covid has also killed Native American, Black and Hispanic people at 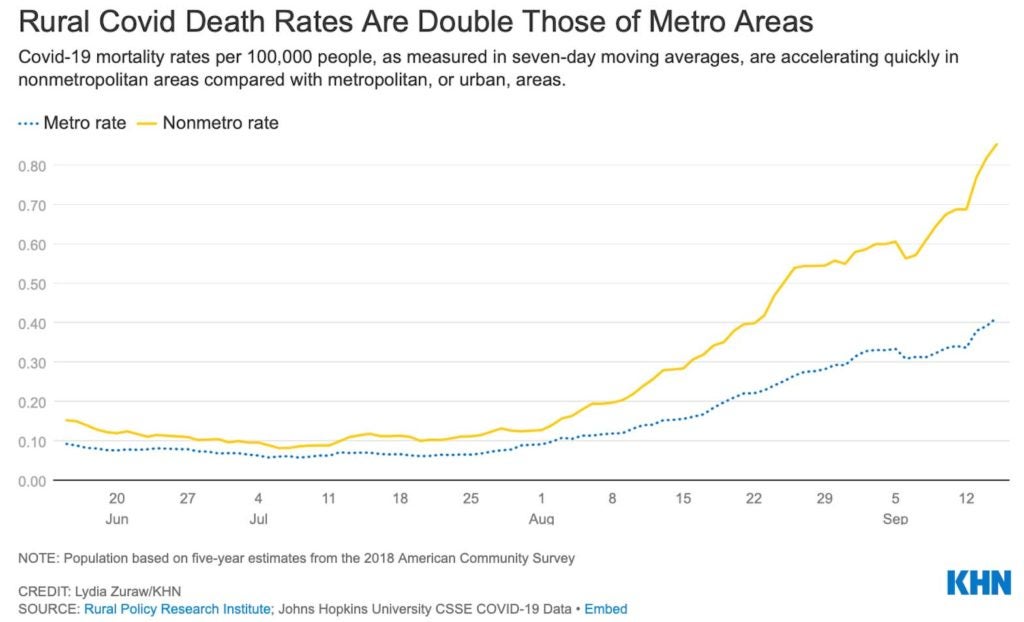 Vaccinations are the most effective way to prevent Covid infections from turning deadly. Roughly 41% of rural America was vaccinated as of Sept. 23, compared with about 53% of urban America, according to an analysis by The Daily Yonder, a newsroom covering rural America. Limited supplies and low access made shots hard to get in the far-flung regions at first, but officials and academics now blame vaccine hesitancy, misinformation and politics for the low vaccination rates.

In hard-hit southwestern Missouri, for example, 26% of Newton County’s residents were fully vaccinated as of Sept. 27. The health department has held raffles and vaccine clinics, advertised in the local newspaper, and even driven the vaccine to those lacking transportation in remote areas, according to department administrator Larry Bergner. But he said interest in the shots typically increases only after someone dies or gets seriously ill within a hesitant person’s social circle.

Additionally, the overload of Covid patients in hospitals has undermined a basic tenet of rural health care infrastructure: the capability to transfer patients out of rural hospitals to higher levels of specialty care at regional or urban health centers.

“We literally have email Listservs of rural chief nursing officers or rural CEOs sending up an SOS to the group, saying, ‘We’ve called 60 or 70 hospitals and can’t get this heart attack or stroke patient or surgical patient out and they’re going to get septic and die if it goes on much longer,’” said John Henderson, president and CEO of the Texas Organization of Rural & Community Hospitals.

Morgan said he can’t count how many people have talked to him about the transfer problem.

Access to medical care has long bedeviled swaths of rural America — since 2005, 181 rural hospitals have closed. A 2020 KHN analysis found that more than half of U.S. counties, many of them largely rural, don’t have a hospital with intensive care unit beds.

Pre-pandemic, rural Americans had 20% higher overall death rates than those who live in urban areas, due to their lower rates of insurance, higher rates of poverty and more limited access to health care, according to 2019 data from the Centers for Disease Control and Prevention’s National Center for Health Statistics.

In southeastern Missouri’s Ripley County, the local hospital closed in 2018. As of Sept. 27, only 24% of residents were fully vaccinated against Covid. Due to a recent crush of cases, Covid patients are getting sent home from emergency rooms in surrounding counties if they’re not “severely bad,” health department director Tammy Cosgrove said.

The nursing shortage hitting the country is particularly dire in rural areas, which have less money than large hospitals to pay the exorbitant fees travel nursing agencies are demanding. And as nursing temp agencies offer hospital staffers more cash to join their teams, many rural nurses are jumping ship. One of Scoggin’s nurses told him she had to take a travel job — she could pay off all her debt in three months with that kind of money.

And then there’s the burnout of working over a year and a half through the pandemic. Audrey Snyder, the immediate past president of the Rural Nurse Organization, said she’s lost count of how many nurses have told her they’re quitting. Those resignations feed into a relentless cycle: As travel nurse companies attract more nurses, the nurses left behind shouldering their work become more burned out — and eventually quit. While this is true at hospitals of all types, the effects in hard-to-staff rural hospitals can be especially dire.

Rural health officials fear the staffing shortages could be exacerbated by health care vaccination mandates promised by President Joe Biden, which they say could cause a wave of resignations the hospitals cannot afford. About half of Scoggin’s staff, for example, is unvaccinated.

Snyder warned that nursing shortages and their high associated costs will become unsustainable for rural hospitals operating on razor-thin margins. She predicted a new wave of rural hospital closures will further drive up the dire mortality numbers.

Staffing shortages already limit how many beds hospitals can use, Scoggin said. He estimated most hospitals in Texas, including his own, are operating at roughly two-thirds of their bed capacity. His emergency room is so swamped, he’s had to send a few patients home to be monitored daily by an ambulance team.