'The Disaster Artist' is a delirious romp

‘The Disaster Artist’ is a delirious romp 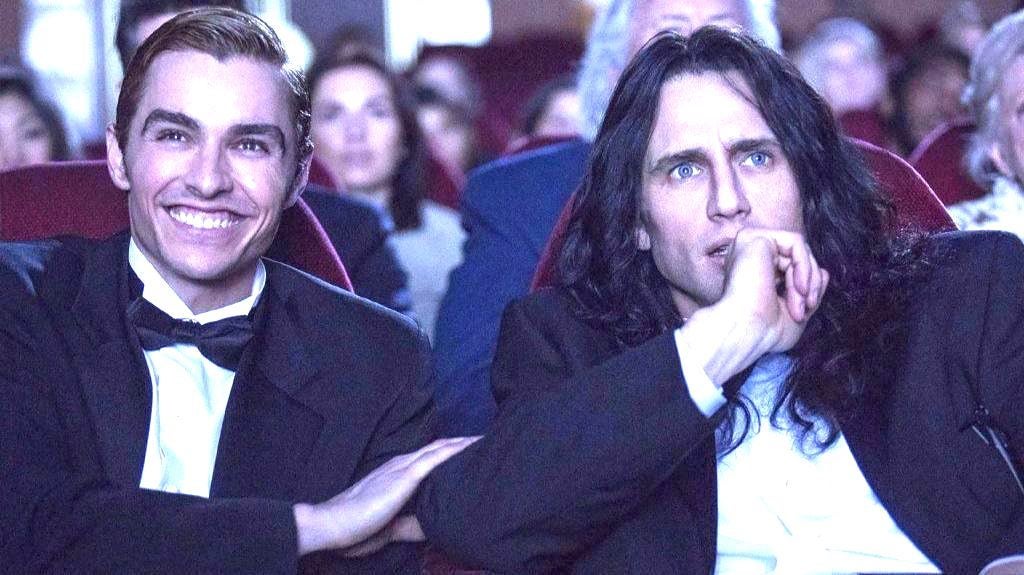 “The Disaster Artist” transforms the tragicomic true story of aspiring filmmaker and infamous Hollywood outsider Tommy Wiseau (James Franco)–an artist whose passion was as sincere as his methods were questionable–into a celebration of friendship, artistic expression and dreams pursued against insurmountable odds.

The story of a San Francisco banker named Johnny (Franco as Tommy Wiseau) who becomes enmeshed in a love triangle between his wife Lisa (Juliette Danielle) and his best friend Mark (Greg Sestero), is awash with terrible dialogue, tone-deaf acting and narrative cul-de-sacs. Based on Greg Sestero’s novel The Room, “The Disaster Artist” is a hilarious and welcome reminder that there’s more than one way to become a legend, and no limit to what you can achieve when you’ve absolutely no idea what you’re doing.

Sestero wrote “The Disaster Artist” in the aftermath of The Room finding its surprising second life as a midnight cult sensation. The memoir traces the earliest days of his friendship with Wiseau, when they were both aspiring actors living in San Francisco. Sestero is 19 when he meets Wiseau in acting class; they become scene partners after Wiseau delivers an especially unhinged take on Marlon Brando’s meltdown in “A Streetcar Named Desire.” There’s something about him that you couldn’t take your eyes off; everything he does in class is technically wrong. The way he performs is a catastrophe, but there’s something oddly artistic about it. Outside of class he sees a side of Wiseau that is jovial, motivational and fun.

One night, on a whim, they drive three hours to the site in Central California where James Dean died in a car accident. Both dream of acting careers; Tommy’s vision of the world, doing whatever you could for your art, inspires Sestero, who is still trying to find himself. Their friendship deepens when Wiseau offers the younger man a room to rent in his West Hollywood condo, after Sestero finally decides to move to Los Angeles to launch his acting career in the late 1990s.

In 2003, an independent filmmaker launches himself into the business out of nowhere with one of the worst movies ever made, “The Room,” a torrid romantic melodrama about a love triangle gone awry that was written, directed, and produced by Tommy Wiseau. This enigmatic figure with dyed-black hair, bearing an impenetrable foreign accent, becomes infamous in Hollywood after erecting a billboard on Highland Avenue promoting his bizarre $6 million vanity project. On the billboard is a close-up of Wiseau’s tough-guy demeanor, replete with a sunken eyelid and a misspelled tagline promising Tennessee Williams-level drama. Premiering on two screens in Southern California and abruptly disappearing after grossing a paltry $1,800 in two weeks, “The Room” gains new life in the years to come through midnight screenings and word of mouth. Along the way, Wiseau comes to embrace his role as the mysterious nobody who blundered his way into Hollywood infamy by pursuing his big dream no matter what the cost.

Fifteen years after its botched premiere, “The Room” is still being discussed, embraced, laughed at, and loved, even among the Hollywood establishment, which rejected Wiseau for years.

“The Disaster Artist” is a story of friendship between two people who share a similar dream. It’s not a movie about movies as much as it’s about dreamers and people who very much want to do something, but don’t have the access or ability. Sestero and Wiseau give each other what they need in order to move forward and achieve their dream. “The Disaster Artist” is a delirious rush. For this movie to play in cities around the world means there’s something more going on than just an epically bad movie that’s fun to laugh at with a group of people. The film has what other bad movies don’t have, which is pure passion.