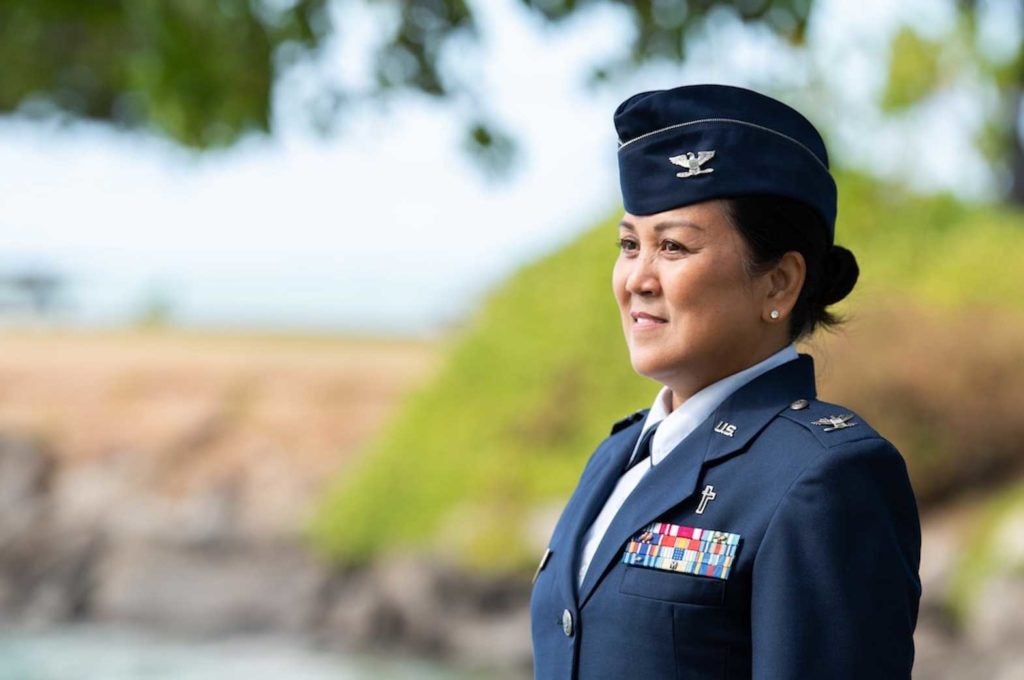 U.S. Air Force Col. Leah Botona Boling has been a military chaplain for more than 19 years, but her religious dedication was first awakened when, growing up in Mati, she often saw a woman in her community, named Lola Pada, helping hospital patients as a volunteer chaplain, she told the Air National Guard publication.

Upon graduating from the Philippine Baptist Theological Seminary in Baguio, Boling moved to Honolulu to work as a hospital chaplain and soon met her husband, Jeff—an Air Force Airmen stationed on the island.

She hesitated enlisting in the Air National Guard up until the morning of September 11, 2001. The terrorist attacks convinced her to join, knowing that she had “the skills, both for mental health and spiritual healing, to help people get through this.”

In April 2002, Boling swore in as the first female chaplain in Hawaii Air National Guard history.

“Military chaplaincy is similar to a church pastor,” said Boling. “The only difference is that my church is bigger than the steeple because my church is wherever in the world Airmen are. I baptize. I marry. I bury. I counsel. All the great work that pastors do I can provide for Airmen anytime, anywhere.”

Boling says that her Filipino heritage will play a big role in how she will lead the ANG chaplain corps, particularly the bayanihan spirit.  “That teamwork, that Filipino family concept, that Bayanihan, I’m bringing that to the table as the [ANG] director of chaplains.”

MOST READ
usa MagSafe: Effortless and wireless charging for iPhones
usa Elon Musk Twitter Bid Restructured and Nearly Complete
usa University of Hawaii names nursing school after PH-born nurse
usa Monkeypox: Should the world be concerned?
usa Highway marker honoring Filipino sailors who settled in Virginia to be unveiled
usa A Time to Rise, Again!
usa Donato Dennis Agalli and Rafael Shamsiev Host Fundraising Reception for U.S. Senate Candidate for New York Joe Pinion
DID YOU KNOW?
The Best Kindle of 2022: Which one should you buy?
A Beginner’s Guide to Buying a Vacuum Cleaner in 2022
Island Hopping in Tulum: The 12 Best All-Inclusive Tulum Resorts
How to Dispute a Debt and Win | Simple Tactics
The 12 Best Lat Exercises for Muscle Growth
Countdown to summer: tips for learning how to surf