US special envoy to Haiti resigns over cruel migrant deportations

US special envoy to Haiti resigns over cruel migrant deportations

The U.S. special envoy to Haiti resigned in protest in a letter that blasted the Biden administration for deporting hundreds of migrants back to the crisis-engulfed Caribbean nation from a camp on the U.S.-Mexican border in recent days.

Daniel Foote, a career diplomat named to his post in July, said conditions in Haiti were so bad that U.S. officials were confined to secure compounds. He said the “collapsed state” was unable to support the infusion of returning migrants.

“I will not be associated with the United States’ inhumane, counterproductive decision to deport thousands of Haitian refugees and illegal immigrants,” Foote said in a letter addressed to Secretary of State Antony Blinken that circulated publicly on Thursday.

Haiti, the poorest nation in the Western Hemisphere, has gone through profound instability in recent weeks, including a presidential assassination, gang violence and a major earthquake. 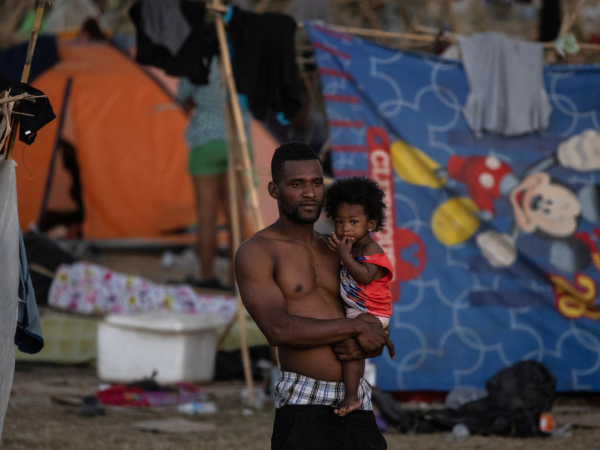 A migrant holds a girl at a makeshift border camp along the International Bridge in Del Rio, Texas, U.S. September 22, 2021. REUTERS/Adrees Latif

The United States has returned more than 1,400 migrants from the camp in Del Rio, Texas to Haiti – including families – and moved over 3,200 people for processing away from the encampment, Department of Homeland Security officials said on Thursday. At its peak on Sept. 18 there were some 15,000 people there.

The population has been reduced to around 4,000 by expulsion flights, detentions and releases. Others have left the dusty riverbank on the Rio Grande for Mexico to avoid being sent home.

Filippo Grandi, the head of the U.N refugee agency, warned that this week the U.S. expulsions to Haiti might violate international law.

Foote submitted his resignation to Blinken on Wednesday, a State Department spokesperson said, adding that Washington was committed to the long-term well being of Haiti, as well as offering immediate help to returning migrants. 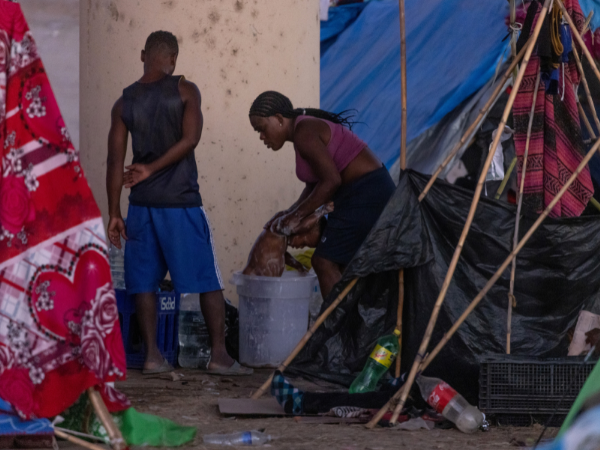 A couple bath a child at a makeshift border camp along the International Bridge in Del Rio, Texas, U.S. September 22, 2021. REUTERS/Adrees Latif

The resignation follows growing pressure on the administration of U.S. President Joe Biden from the United Nations and his fellow Democrats over the treatment of Haitians in the sprawling impromptu migrant camp.

Biden’s handling of what Republicans portray as a crisis at the border – including record numbers of migrant detentions this year – has led to growing disillusionment from advocates who hoped for an end to deterrent measures brought in by his predecessor Donald Trump.

“This is a challenging moment that requires leadership. It is unfortunate that, instead of participating in a solutions-oriented policy process, Special Envoy Foote has both resigned and mischaracterized the circumstances of his resignation.”

“He failed to take advantage of ample opportunity to raise concerns about migration during his tenure and chose to resign instead,” said Price. Migrants seeking asylum in the U.S., grab onto a rope to guide them through the current, while crossing the Rio Grande river into Mexico near the International Bridge between Mexico and the U.S. in Ciudad Acuna, Mexico, September 22, 2021. REUTERS/Go Nakamura

As well as the Haitians, the United States frequently deports Central American and other migrants caught crossing the border.

Foote’s decision to leave was interpreted and welcomed by rights groups as a stern criticism of the administration’s immigration strategy.

“A big bold move. And a big deal,” said William O’Neill, a lawyer specializing in humanitarian, human rights and refugee law. “He will be missed.”

U.S. Department of Homeland Security officials said that determinations on who was expelled and who has been allowed to stay in the United States to pursue their immigration cases were made on a “case-by-case” basis, without providing numbers of releases.

Wade McMullen, an attorney with the Robert F. Kennedy Human Rights organization, said several hundred people, mostly pregnant women and parents with children, had been released in Del Rio, Texas, over the past several days.

Images of U.S. border guards on horseback using long reins to whip at Black migrants at the weekend caused outrage within the White House and from rights groups and prompted Vice President Kamala Harris on Wednesday to seek answers from Homeland Security Secretary Alejandro Mayorkas. The DHS said patrols on horseback had ceased in Del Rio.

LATEST
Robredo: Presidential bid ‘much lighter’ than 2016 VP race
Vax makers to apply before end of the week for EUA of booster shots — Galvez
How to Delete Apps on iPhone Fast and Easy
Group expects businesses to recover as holiday season nears
Comelec seeks disqualification for two consecutive polls for nuisance bets