As Canada’s election race enters its final weekend, Prime Minister Justin Trudeau is redoubling efforts to motivate supporters, knowing his bid for re-election on Monday could be doomed by low turnout.

Recent opinion polls show Trudeau’s Liberals neck and neck with the opposition Conservatives led by Erin O’Toole, suggesting that getting out the vote will be crucial.

Low turnout tends to favor the Conservatives, who are traditionally better at ensuring their supporters cast ballots.

“It’s time to step up. Join our movement, make some calls, go knock on doors, talk to your neighbors, talk to your family,” Trudeau said this week at an Ontario rally, a call he has often repeated during the last week of the campaign.

Trudeau, 49, called an early election on Aug. 15, seeking a parliamentary majority after two years of minority government in which he had to work with other parties to govern. But he is now scrambling to save his job.

Two senior Liberals with direct roles in the campaign both told Reuters they were worried that Canadians might be more focused on returning to their routines – rather than on politics – as increasing numbers of people are fully vaccinated.

Wishing my friend @JustinTrudeau the best in Canada’s upcoming election. Justin has been an effective leader and strong voice for democratic values, and I’m proud of the work we did together.

While Canadians voted in early polls in record numbers, demand for mail-in ballots has been far lower than expected.

The pandemic is intensifying in parts of the country and voters will likely face longer lineups than usual on Election Day, due to fewer polling stations and distancing requirements.

O’Toole, 48, a former Cabinet minister who has led his party for just over a year, has proved competitive with a disciplined campaign appealing to centrist voters with progressive pledges, while avoiding alienating his center-right base.

“It’s not about convincing people they should think about voting for you anymore. It’s about getting the people who are committed to voting for you out to vote,” said Darrell Bricker, chief executive of Ipsos Public Affairs.

“Turnout is going to be everything.”

The latest Ipsos poll has the Liberals and Conservatives tied at 32%, with the left-leaning New Democrats in third at 21%. Trudeau has a slight lead on O’Toole as preferred prime minister, at 32% to 29%.

But opinion polls do not always reflect what happens on voting day, as turnout can hugely affect seat counts. In the past, higher turnout has favored the Liberals and New Democrats, Bricker said.

“If turnout is unusual, we could have many more surprises on Monday night,” Philippe Fournier, a polling analyst for the 338Canada.com website, told the Reuters Global Markets Forum on Thursday. 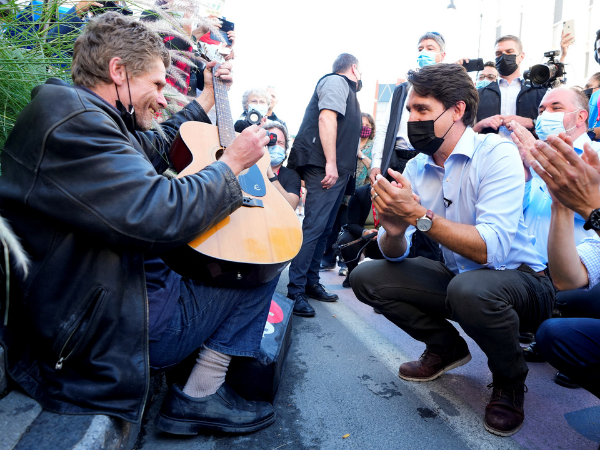 Trudeau held a comfortable lead in the polls going into the campaign, but that has vanished because of what many voters see as an unnecessary election.

He also faces a challenge from New Democratic Party leader Jagmeet Singh https://www.reuters.com/world/americas/new-democrats-singh-looks-dance-his-way-role-canadas-kingmaker-2021-09-15, 42, who outstrips Trudeau and O’Toole in personal popularity and appeals to the same voters the center-left Liberals need.

If enough voters opt for Singh, it could split the progressive camp and allow O’Toole to take power. Trudeau told a rally on Sunday that the Liberals were “the only progressive party that can stop the Conservatives from taking us backwards.”

Over the past two weeks, Trudeau has also accused O’Toole of cozying up to the gun lobby and allowing Conservative lawmakers to try to reopen the abortion debate.

O’Toole peppers his daily campaign appearances with jabs at Trudeau’s decision to call an early election during a pandemic, painting the Liberal leader as selfish and power hungry.

With polls showing an uptick in support for the small, far-right People’s Party of Canada, whose supporters have dogged Trudeau’s campaign with protests over vaccine mandates, O’Toole has to convince its supporters he is their only hope of getting Trudeau out of office, while not alienating core Conservatives.

“Make no mistake. A vote for anyone other than Canada’s Conservatives, is a vote for more of the same from Mr. Trudeau,” O’Toole said on Tuesday.

“It’s a closer race than what people expected … and now there’s a real possibility the Conservatives could win. So that should stimulate the Conservatives’ voters, but also Liberals,” said Daniel Beland, director of the Institute for the Study of Canada at Montreal’s McGill University.

“We might have done all of this to end up with the same result as last time.”