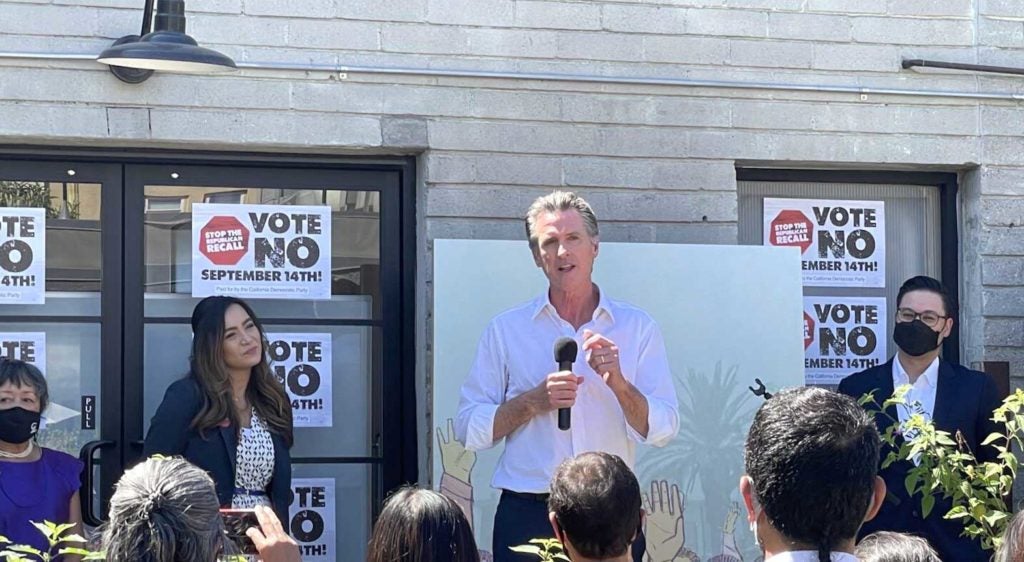 California Governor Gavin Newsom makes a final plea to Fil-Am voters at Rideback Ranch in Los Angeles’ Historic Filipinotown on Sunday, Sept. 12 as he faces a Republican-led recall election. He was joined on stage by community leader Jocelyn Geaga-Rosenthal, LA Board of Public Works Commissioner Jessica Caloza and Nathaniel Epstein, chair of the Filipino American Caucus of the California Democratic Party. | AJPress photo

A crowd of Fil-Am elected officials, community members and representatives of local organizations gathered at Rideback Ranch along Beverly Boulevard to listen to the governor as he covered his administration’s track record over his nearly three years in office, especially in leading the state during the COVID-19 pandemic.

“This is a profoundly significant moment in California’s history that will have repercussions all across the United States unless we turn out and vote no on this recall,” Newsom said to cheers.

California is home to the largest concentration of Filipinos in the United States with a population of over 1.6 million; 600,000 live in the greater Los Angeles area alone.

Newsom credited the voting bloc for helping him win races dating back to his bid for San Francisco Board of Supervisors and then the city’s mayor. He also paid tribute to the late Bay Area community leader and activist Alice Bulos.

“Alice Bulos was one of my great champions — a Filipino leader in Northern California. I would not be mayor of San Francisco without Alice’s support. That’s a fact,” Newsom said.

“It’s a privilege to represent every day the API community in this state, and to continue to push back against hate, bigotry and divisiveness and have the backs of our diverse communities,” Newsom said.

Amid the rise in anti-Asian hate incidents across the state since the start of the pandemic, Newsom has been vocal in condemning the discrimination and violence and signed a $156 million API Equity Budget in July, which would provide grants for hate crime victim support and crime prevention services and improve reporting and tracking data.

Should the recall effort prevail, the governor warned that these measures to combat hate against the community would be in danger. 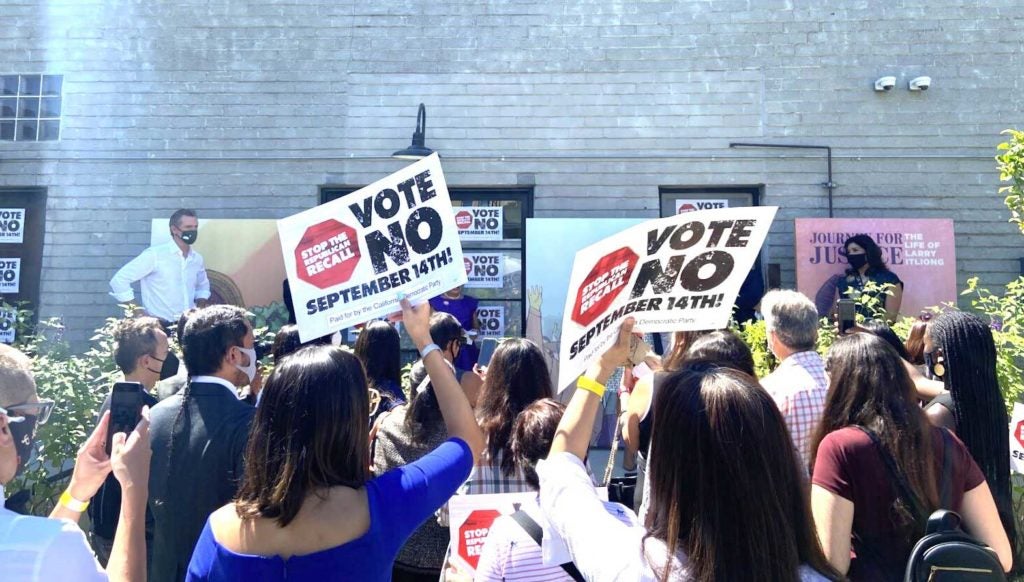 Supporters hold up “Vote No” signs before Newsom begins his remarks. | AJPress photo

“I don’t want to be hyperbolic…but the forces of hate are behind this recall. Anti-Asian hate is on the pro recall website and they haven’t taken it down,” Newsom told the Asian Journal. “We’ve got to send a message that [hate] has no place in California or anywhere. It’s a point of deep pride. There’s no other state in America with more Asians than the state of California, not just in terms of raw numbers, but also population. I’m proud of that.”

Jessica Caloza, an LA Board of Public Works commissioner and recording secretary of the California Democratic Party’s Asian Pacific Islander (API) Caucus, touted the governor’s leadership in protecting health care workers as about 20% of the state’s nursing workforce is of Filipino descent and other relief programs to keep families afloat.

“He has provided critical lifelines to people and communities who need it most through stimulus checks, billions in grants for small businesses, strongest eviction protections in the entire country and rent coverage for low-income families like those who live here in Historic Filipinotown,” said Caloza, who spearheaded Sunday’s event.

“He’s upheld and protected the Filipino community who have been on the frontlines, like our health care workers, like your Titos (uncles), your Titas (aunts), people in my family that we know who serve as nurses and home care workers.”

Tuesday, September 14 is another opportunity to demonstrate that Fil-Ams are a crucial voting bloc in the state, Caloza argued. Newsom also slammed the remnants of “Trumpism” after former President Donald Trump left office earlier in January and gave a snapshot of what the Golden State would look like under conservative radio host Larry Elder, considered the top Republican challenger in the race.

“If we don’t vote no, Larry Elder will be sworn in…as the next governor of the state of California in a matter of weeks. He doesn’t support the Fight for 15. He doesn’t believe in 15 cents. He believes the market should decide [and] there should be no minimum wage,” Newsom said.

He added, “He stood back defending Trump as Trump attacked the Asian community, not just here in our state, but throughout the United States…He has consistently been on the wrong side.”

California voters can return their ballot by mail or a drop box location by Tuesday, or have until 8 p.m. to vote in person.

“We’ll be doubling down on what we’ve been doing,” Newsom told the Asian Journal. “All of these issues, from climate, addressing the last gasps of this pandemic, education, health care — we want to double down on these efforts in the next year.”