Fil-Am sworn in as US Treasury adviser

Fil-Am sworn in as US Treasury adviser 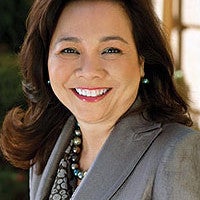 WASHINGTON – A Filipina community leader was sworn in as a member of the U.S. Treasury Department’s Community Development Financial Institutions (CDFI) Fund Community Advisory Board on Thursday, November 16.

Faith Bautista,  president and CEO of the National Diversity Coalition (NDC) and National Asian American Coalition (NAAC), was appointed by the Trump administration to serve for a total of four years.

The swearing-in ceremony was led by U.S. Treasury Secretary Steven Mnuchin inside the Cash Room of the department’s building.

Bautista is one of nine private citizens to serve on the board, alongside six public representatives, totaling 15 members. She is one of two officers on the board coming from a national consumer or public interest organization.

The Advisory Board advises the U.S. Treasury Department’s CDFI Fund on policies and activities focusing on economic development and empowerment for underserved and low-to-moderate income communities.

“I am honored to be the first person of Filipino descent to serve on the CDFI Fund’s Community Advisory Board. Through this role, I will continue to advocate for the underrepresented within our community and beyond,” Bautista told the Asian Journal, adding that her position will hopefully bring more Filipinos appointed to government positions. In October, Bautista and the NDC announced the launch of The Capital Corps, LLC, a CDFI-created with the intention to finance homeowners and small businesses that are currently underserved by banks and other traditional financial institutions.

“I’ve been working on policies to help 70 percent of people living paycheck to paycheck. CDFIs are the solution to give access to capital to low-to-moderate income consumers. I will continue shaping up policies to increase jobs, homeownership, and provide access to small businesses,” she said.

NAAC is a HUD-approved nonprofit housing counseling organization focused on sustainable homeownership, job creation, small business, and economic development for Asian Americans throughout the nation. NDC is a congregation of community organizers, faith-based leaders, nonprofit directors, and business owners who work together to achieve financial equality and empowerment for underserved communities.

Through her work at NDC and NAAC, Bautista creates strategic partnerships between corporations, government agencies, and community organizations to advocate for opportunities in homeownership, small business, and financial literacy. The three major themes that the organizations’ work focuses on are diversity, economic empowerment, and corporate social responsibility.