Nine Filipino and Fil-Am authors to read from their new books, Oct. 9

Nine Filipino and Fil-Am authors to read from their new books, Oct. 9 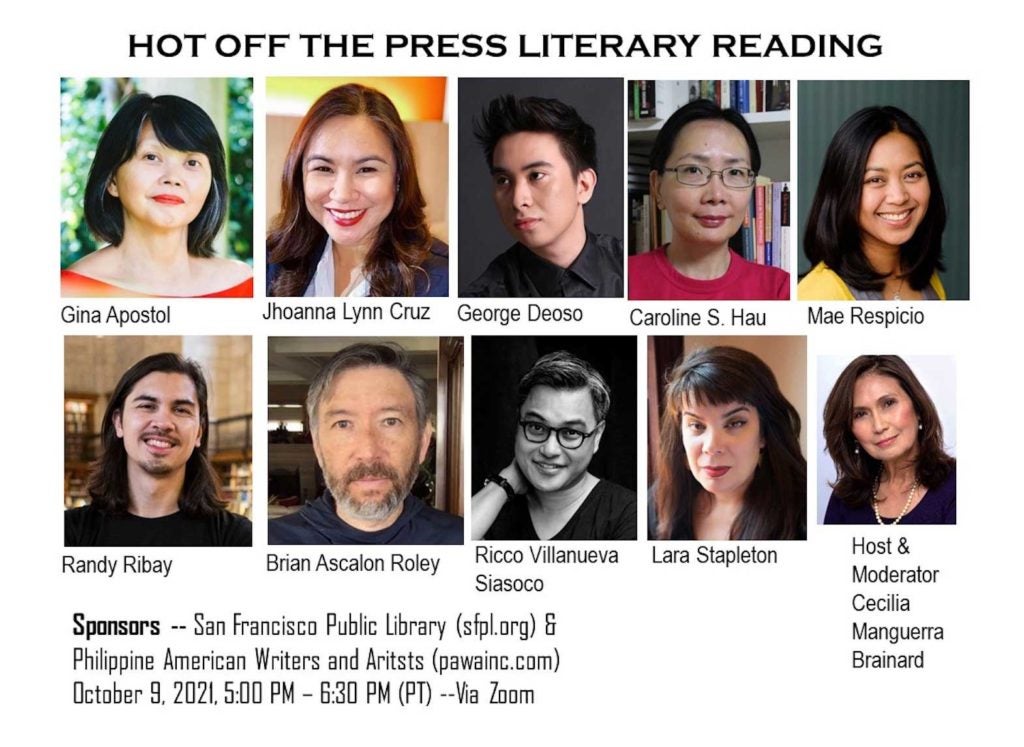 Nine Filipino and Filipino American authors will read excerpts from their new books via Zoom on Saturday, Oct. 9, from 5 to 6:30 p.m. Pacific Time. (Check Events at sfpl.org, for the Zoom link.)

Hosted and moderated by author Cecilia Manguerra Brainard, Hot Off the Press (HOTP) Literary Readings have been showcasing Filipino and Fil-Am authors and their new books since 2011.

HOTP is a program of the Filipino American International Book Festival sponsored by the San Francisco Public Library and Philippine American Writers and Artists (PAWA).

Gina Apostol is the author of critically acclaimed novels The Revolution of Raymundo Mata, Bibliolepsy, Insurrecto, and Gun Dealers’ Daughter. Her essays and stories have appeared in The New York Times, Los Angeles Review of Books, Foreign Policy, Gettysburg Review, Massachusetts Review, and others.

Jhoanna Lynn B. Cruz is the author of the memoir, Abi Nako, Or So I Thought, which is about her starting her life over in Davao City as a lesbian writer. Her writings and edited works include: Women Loving. Stories and a Play, Women on Fire, and Tingle Anthology of Pinay Lesbian Writing. She is an Associate Professor at the University of the Philippines Mindanao.

George Gonzaga Deoso is the author of The Horseman’s Revolt and Other Horrors, a collection of dark short stories. His fiction, poetry, and essays had appeared in Liwayway Magazine, Philippine Panorama, Philippines Graphic, Philippine Daily Inquirer, and the Sunday Times Magazine, among others. He was a fellow for poetry in the University of Santo Tomas, Iyas, and Silliman national writers workshop.

Caroline S. Hau is Professor at the Center for Southeast Asian Studies, Kyoto University, Japan. She obtained her BA degree from the University of the Philippines and her MA and PhD from Cornell University. She recently received the Grant Goodman Prize in Historical Studies from the Philippine Studies Group of the Association of Asian Studies. The novel, Tiempo Muerto, is her debut novel.

Mae Respicio is the author of The House that Lou Built; which won an Asian Pacific American Libraries Association Honor Award, was an NPR Best Book, and was named to many state reading and “best of” lists. Her most recent books are Any Day With You; and How to Win a Slime War (Wendy Lamb Books/Random House). She lives with her family in the suburban wild of Northern California.

Randy Ribay is the author of An Infinite Number of Parallel Universes, After the Shot Drops, and, most recently, Patron Saints of Nothing—which received five starred reviews, was selected as a Freeman Book Award winner, and was a finalist for the National Book Award, LA Times Book Prize, Walden Book Award, Edgar Award, International Thriller Writers Award, and the UK’s CILIP Carnegie Medal.

Brian Ascalon Roley has received fellowships and awards from the National Endowment of the Arts (2020 Literature Fellow); University of Cambridge, Cornell University, the Ohio Arts Council, the Djerassi Foundation, Ragdale, and the VCCA, among others. His books include American Son: a Novel; The Last Mistress of Jose Rizal, and the award-winning chapbook, Ambuscade.

Ricco Villanueva Siasoco has received fellowships from The Center for Fiction, Lambda Literary, and the National Endowment for the Humanities. He lives in San Francisco where he is a Grade Dean at the Urban School of San Francisco. The Foley Artist is his first book of stories; it was awarded Honorable Mention in the 2021 Asian American Studies Book Award.

Lara Stapleton is the author of The Lowest Blue Flame Before Nothing and The Ruin of Everything. Her work has appeared in The LA Review of Books, Poets and Writers, The Brooklyn Rail, Ms., Glimmer Train, The Indiana Review, among others. She received a Ludwig Vogelstein Foundation Grant for writers. She was a two-time winner of the University of Michigan’s Hopwood Award for fiction. She was also the winner of the Columbia Journal fiction prize.

MOST READ
usa What are the advantages of credit that saves money and time?
usa The truth and meaning behind Squid Game
usa List of the best new Apple TV movies to watch
usa Climate change may wash out traces of earliest Filipino settlers in U.S.
usa Open Letter to Manny Pacquiao
usa How you can become a LinkedIn power user
usa Pandemic is worsening U.S. nursing shortage