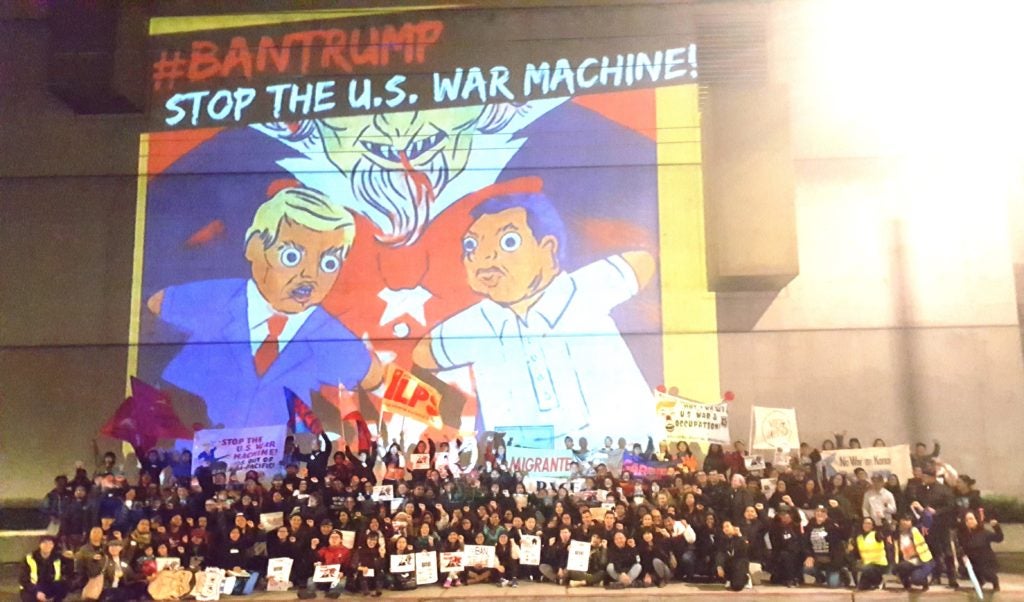 After the protest a hundred rally participants gathered at a giant slide show image of Trump. INQUIRER/Jun Nucum

SAN FRANCISCO — A hundred energized, mostly Bay Area youths demonstrated in front of the Federal Building in downtown San Francisco to mark the culmination of the 12-day trip of President Donald Trump through Asia with a final stop in the Philippines to attend high-level meetings of the Association of Southeast Asian Nations (ASEAN) in Manila.

The drumbeat-driven, music-inspired protest was part of simultaneous demonstrations in the Philippines and a series of #BanTrump actions from November 12-14 held in Chicago, Los Angeles, and New York.

Rallies in the US were organized under the banner #BanTrump and #ResistUSWar, an alliance of Filipino organizations and peace advocates from various ethnic communities against Trump’s support for President Rodrigo Duterte’s “drug war” killings.

Among the highlights of the rally was a guerilla theater that featured Trump-IT the Not-So-Wise Clown, a play on the evil clown in the movie “IT.” There were effigies of Uncle Sam, Trump and Duterte as special guest.

Bayan Muna USA secretary-general Jessica Antonio regards Trump and Duterte as fascist leaders who rule their countries through fear, intimidation and attacks on the people.

“Trump is a racist, sexist fascist. Duterte has killed more than 12,000 poor people under his drug war in just over one year of tenure as president. Despite their many similarities, their brashness, etc., there is a big major difference. Trump represents U.S. imperialism and its tentacles reach far and wide beyond the U.S. He is there to maintain U.S. hegemony and domination in the world economy through militaristic enforcement and one-sided agreements. 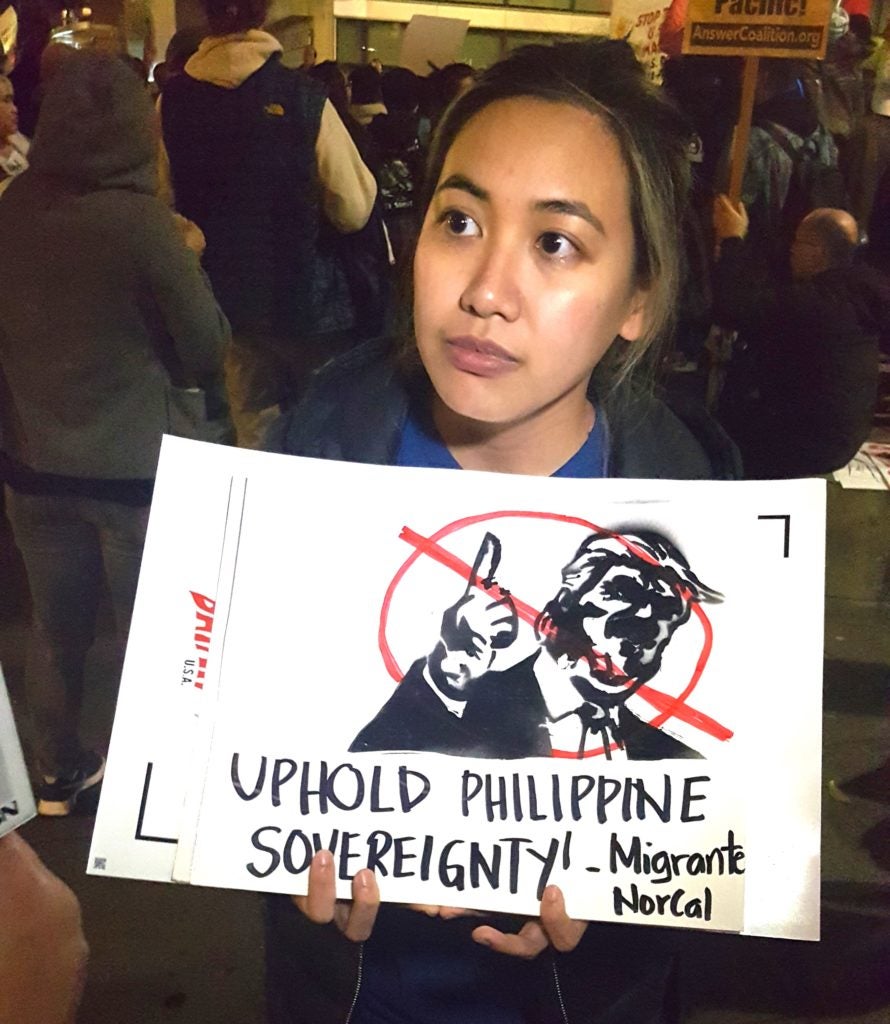 Antonio added: “We don’t want our president to be a puppet of the United States but rather serve the people in the Philippines, to really address the root problems of poverty.”

Protesters demanded the removal of all of U.S. military bases in Asia-Pacific, that U.S. military personnel leave the Philippines and not takeover facilities under the EDCA (The Enhanced Defense Cooperation Agreement is a pact to bolster the U.S.–Philippine alliance).

Among the youthful demonstrators was Joemae Santos, a San Francisco State University (SFSU) student who is also with the League of Filipino Student (LFS)-Bayan. She rued that US budget cuts to education caused so many students to be in debt even as a $700B defense budget is being proposed for 2018 at the expense of social services funding. “What we see here is that President Trump and President Duterte are not concerned for the people. Filipinos and their country should have control over our own resources, our policies because we know what is best for our land and our people. Whereas when the U.S. comes into play, we see us turn into commodity.”

The need to determine their own future is also what Io Sunwoo of Hello Organized Bay Area Koreans (HOBAK) of Oakland wants. Sunwoo was expressing solidarity and with the rally.

“We need our homelands to determine for themselves our futures and that is only going to happen if foreign intervention stops,” Sunwoo added. 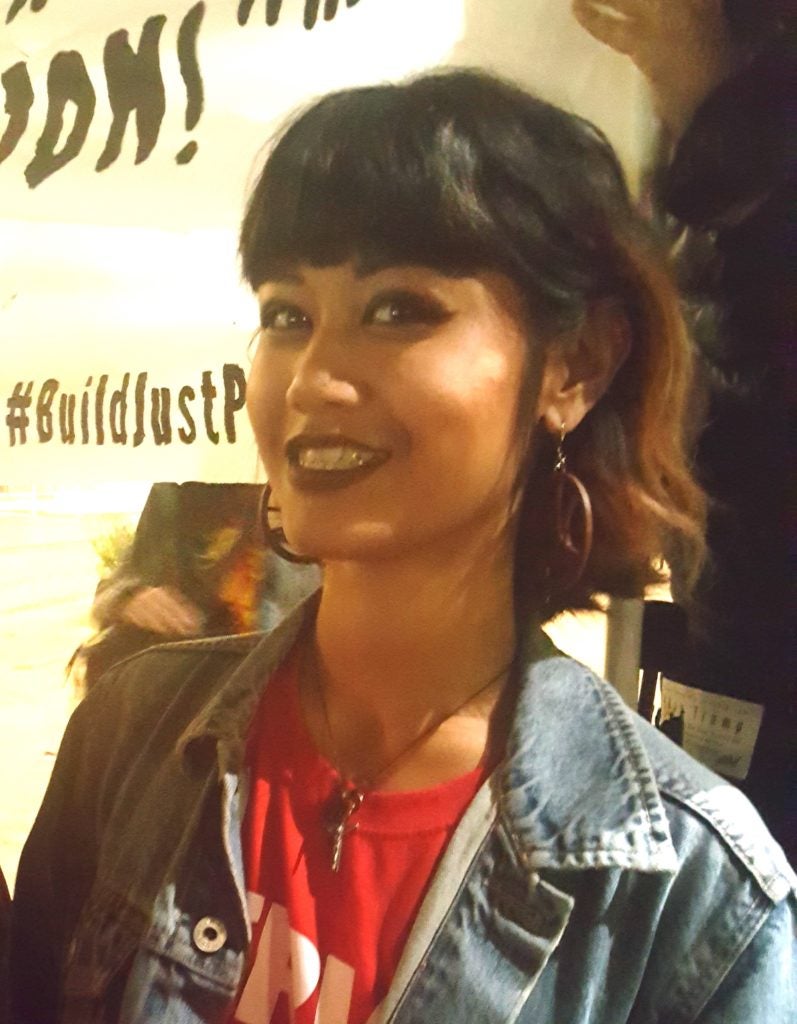 Joemae Santos, a San Francisco State University (SFSU) student and member of League of Filipino Student (LFS)-Bayan want Filipinos to have control over their own resources, and policies. INQUIRER/Jun Nucum

“Our resources are sold to other countries very cheaply. Other countries are able to process them to final products which are in turn sold back to us in higher prices. We should not rely on foreign countries to do it for us because that will only leave us in debt,” David explained.

David described the two governments as fascist—Duterte with his drug war, and Trump with his attack on immigrants, Muslims, people of color.

After the program proper, participants marched to a giant slide presentation reflected on the wall of the federal building, featuring cartoons and anti-Trump images.