“From the Thomasites to the OED: The Development of English from American Transplant to Philippine Language” was hosted by Sentro Rizal Washington DC/Philippine Embassy via Zoom and FB Live on Aug. 26.

“The Philippines is recognized as an English-speaking country, and our proficiency in speaking the language gives Filipinos overseas a competitive advantage across the globe,” said Dr. Danica Salazar, a World English Editor for Oxford Languages. She oversees policy, procedures and strategy for world varieties of English, as well as researches and writes World English entries for the Oxford English Dictionary (OED).

Salazar’s talk touched on what sets the OED apart from other English dictionaries, words in the OED that are unique to Philippine English, the pre-colonial, Spanish, American, and postwar influences to these words, and how Filipinos have produced English literature on their own.

She also explained how Filipinos “create words” by borrowing from other languages, reflecting the diversity of the many languages spoken in the Philippines. She highlighted Filipino code-switching – when,  depending on the context or the person spoken to, speech is switched between these languages, as in Tag-lish (Tagalog-English). This colloquial way of communication is common in urban centers in the Philippines. 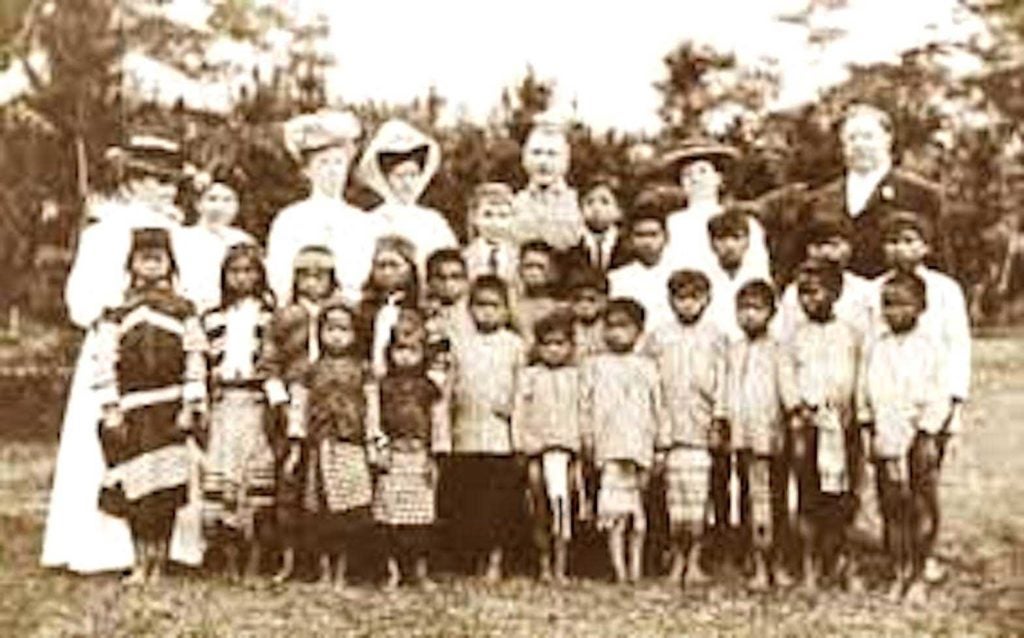 The Thomasites with Filipino pupils.

“Different combinations of our language with English is how we communicate now and that’s fine. It is really weird that we put so much premium on the purity of languages when in fact, multilingualism is the norm not only in the Philippines but also in the world,” she stated.

In closing her talk, Dr. Salazar said that English is now a Filipino Language too, emphasizing that “for over 100 years, we have been using English in our own country without the involvement of Americans… by using the language, by speaking it, by writing it, we have contextualized it and made it our own and made it work for us.”

She also underscored the importance of access to good, quality instruction in English especially for many Filipino children in order to avoid exclusion.

“From the Thomasites to the OED: The Development of English from American Transplant to Philippine Language” is available for streaming on the official Facebook page (https://www.facebook.com/PHinUSA/videos/388192369407149) of the Philippine Embassy.

MOST READ
usa MagSafe: Effortless and wireless charging for iPhones
usa Elon Musk Twitter Bid Restructured and Nearly Complete
usa University of Hawaii names nursing school after PH-born nurse
usa Monkeypox: Should the world be concerned?
usa Highway marker honoring Filipino sailors who settled in Virginia to be unveiled
usa The latest on the tragic Texas school shooting that left 19 children, 2 adults dead
usa A Time to Rise, Again!
DID YOU KNOW?
The Best Kindle of 2022: Which one should you buy?
A Beginner’s Guide to Buying a Vacuum Cleaner in 2022
Island Hopping in Tulum: The 12 Best All-Inclusive Tulum Resorts
How to Dispute a Debt and Win | Simple Tactics
The 12 Best Lat Exercises for Muscle Growth
Countdown to summer: tips for learning how to surf