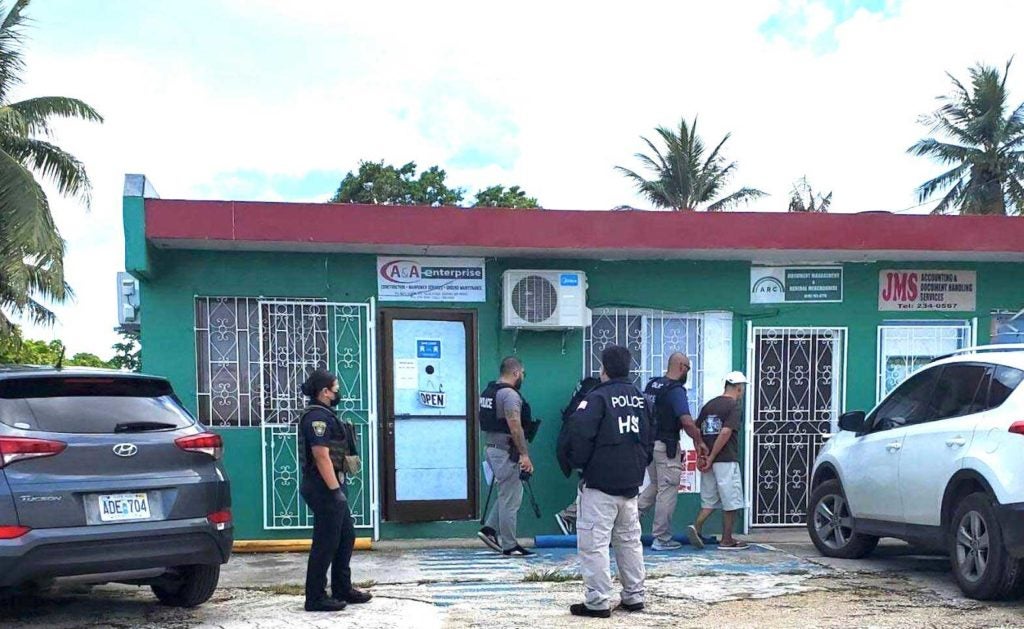 A man is seen in handcuffs as federal agents execute an arrest warrant at a manpower agency in Gualo Rai, Saipan, on Friday morning. CONTRIBUTED

Alejandro Nario, 65, and Mylene Casupanan, 42, both Filipino citizens were taken into custody, without incident, for possible involvement in a visa fraud scheme.

The program allows employers in the Commonwealth of the Northern Mariana Islands (CNMI) to apply for permission to employ those who are ineligible to work under other nonimmigrant worker categories.

HSI agents also discovered that several of the foreign workers were not given jobs once they arrived in CNMI and were told to pay A&A Enterprise for their employment taxes, which were based on fictitious wages.

Nario is the owner, president and manager of A&A Enterprises, which contracts with other local businesses or individuals, to provide labor employees, such as gas station attendants, kitchen staff, groundskeepers and housekeepers.

Casupanan is charged separately with one count of conspiracy to defraud the U.S.

According to the indictment, Casupanan conspired with Nario to defraud the U.S. in filing CW-1 petitions to U.S. Citizenship and Immigration Services. The program allows employers in the Commonwealth of the Northern Mariana Islands to apply for permission to employ those who are ineligible to work under other nonimmigrant worker categories.

“It was part of the conspiracy that A&A Enterprises would, in exchange for money, submit a petition for CW-1 visas that would falsely and fraudulently represent that a full-time employer-employee relationship would exist between A&A Enterprises and the beneficiaries under the employment terms set forth in the petition,” the indictment states.

The indictment against Nario stated that “between or about Jan. 1, 2019, and continuing through or about Feb. 1, 2021, defendant knowingly caused to be sent, via a private or commercial interstate carrier, namely FedEx, I-129CW petitions on behalf of foreign citizen beneficiaries to the USCIS California Service Center in Laguna Niguel, California.

The indictment also states, “After these foreign citizens were granted a CW-1 visa and entered the United States under false premises, defendant, and others known and unknown, acting on defendant’s behalf, required the foreign citizens to pay a routine tax of $194 every two weeks to A&A Enterprises.

Defendant and his confederates demanded these foreign citizens pay this tax, despite A&A Enterprises’ failure to provide employment as outlined in I-129CW petitions, and if no tax was paid, A&A Enterprises would cancel and not seek to renew the CW-1 visas.”

The indictment adds that federal agents also seized proceeds from the scheme through Nario’s personal and business bank accounts in the total amount $11,721.87 on Feb. 22, 2021.

Under a notice of criminal forfeiture, upon his conviction, the U.S. government will also confiscate property or proceeds traceable and resulting from the alleged scheme.