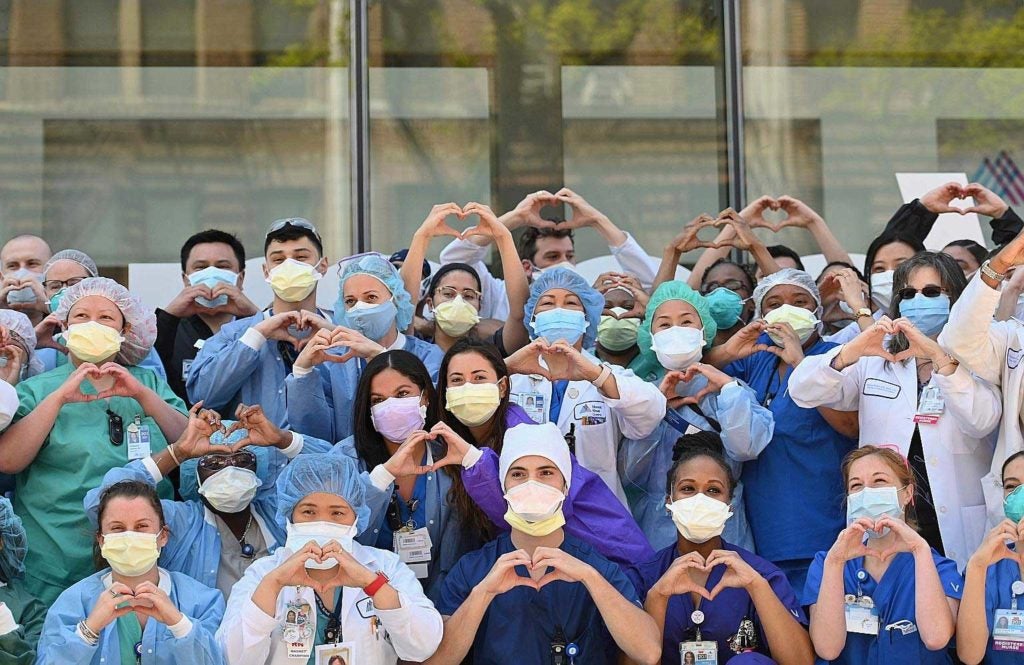 Nurses and health care workers gesturing love in celebration of Nurse Week and International Nurses Day outside Mt Sinai Queens in the Queens borough of New York City. ProPublica reported that at least 30 Filipino health workers had died in the New York-New Jersey region since the end of March. AFP

Throughout the COVID-19 pandemic, Filipino Americans have accounted for up to nearly one-third of registered nurse deaths, despite representing 4 percent of registered nurses across the United States, according to figures from the union National Nurses United.

But it’s unknown exactly how many Filipino Americans have died from the coronavirus because data collection in the United States lumps them into a single category that counts all other Asian American subgroups.

It’s a practice that actively perpetuates disparities and contributes to health inequality, according to an article published last month in the journal JAMA Health Forum.

The article, “US Health Care Relies on Filipinxs While Ignoring Their Health Needs: Disguised Disparities and the COVID-19 Pandemic,” co-authored by Oronce and researchers Alexander Adia and Ninez Ponce, was born from a letter written earlier this year by the Filipinx/a/o Community Health Association addressed to the Biden administration. The letter advocated for measures to address Filipino COVID-19 disparities, including the collection of disaggregated data.

Filipino Americans are one of the largest Asian American groups in the United States and have had a long history in the country, Oronce said. Despite their high representation in health care, their health needs have been ignored, he added. He said ignoring those needs while relying heavily on Filipino Americans for healthcare is a stark contrast to the efforts to improve health equity.

While numbers on Filipino American COVID-19 deaths are unknown, certain factors make it likely that the group has been hit hard by the pandemic, including the large number of those working in health care, the large share of of those living in multigenerational households, and higher rates of underlying medical conditions.

Oronce said that aggregating data masks certain health disparities – which can raise the risk of severe illness from COVID-19 – in Filipino Americans and allows them to remain unaddressed.

The 2017-18 California Health Interview Survey, an annual survey that provides data on the health of Californians, provides disaggregated data on certain Asian American subgroups that shows that Filipinos are found to have higher rates of asthma, hypertension and diabetes compared to Asians overall and non-Hispanic whites. Collectively, however, Asian Americans have lower rates of those conditions than non-Hispanic whites.

“When something is invisible, it allows disparities to be perpetuated,” Oronce said.

He said that the JAMA Health Forum article is important because Filipino Americans are invisible in the broader discussion of public health.

“When we’re talking about racial disparities, it gets so frustrating to hear the discussions ignoring Asian Americans as if we don’t exist, or that because of the model minority myth – our proximity to whiteness –  that we’re healthier,” he said.

The article is not a study, but rather a commentary and argument that additional investment is needed to study health disparities so they can be addressed. Oronce hopes that the fact that the importance of disaggregated data in the Filipino American community now exists in literature will help people make the case to funding agencies that money should be provided to study Filipino American health issues.

At the same time, he said that hospitals, clinics and public health departments need to find ways to disaggregate data.

“If they choose not to do that, then they are just as guilty and complicit in driving these these disparities in health outcomes.”

Collecting disaggregated data in these settings would require additional resources, he said. He noted that the way race or ethnicity is recorded is sometimes based on what the person checking in the patient believes their race is. A better way to collect that data, Oronce said, would be to have patients self-identify their race by checking a box on a standard list of race and ethnicity categories.

“If health care systems are already like thinking about their approach to health equity, this is something that they can incorporate towards it,” he said. “A lot of hospitals now are developing these equity plans, and they’re trying to put money where their mouth is.”