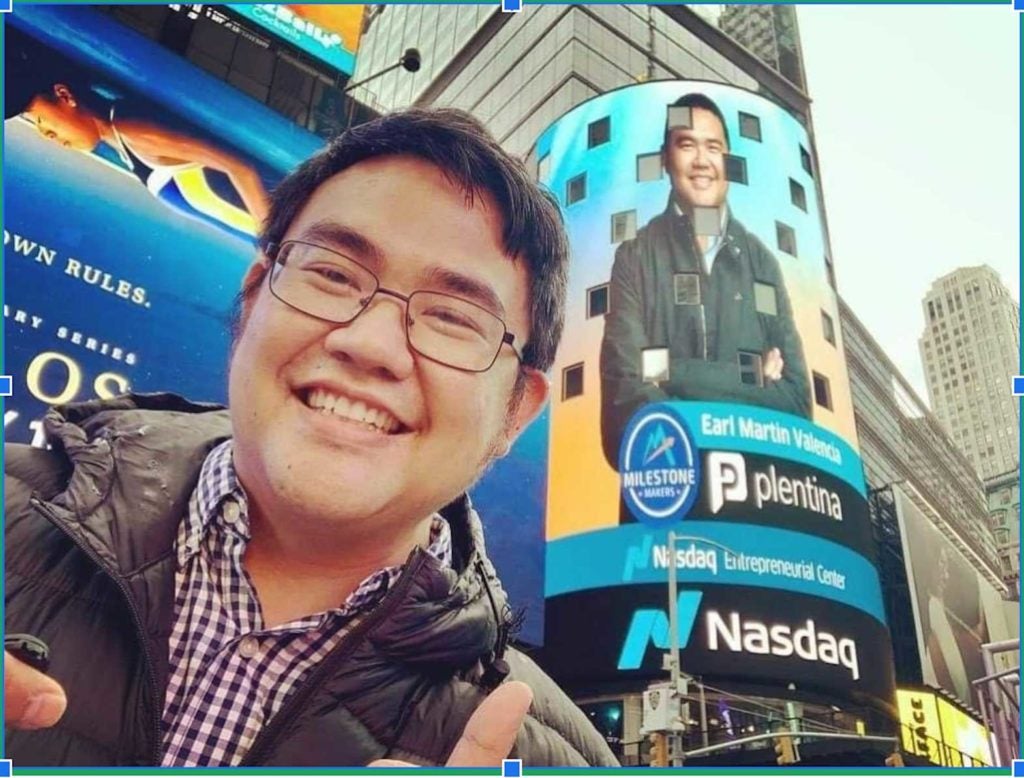 Fintech startup Plentina, represented by Co-Founder and Chief Business Officer Earl Martin Valencia, was featured on the electronic facade of the launch site of the world’s most formidable companies–the Nasdaq Tower in Times Square.

Valencia is one of 12 graduates of Milestone Makers, a prestigious program of the Nasdaq Entrepreneurial Center, which provides individual mentorship, executive coaching and access to industry experts to a select group of promising early-to-mid stage startups.

Plentina stood out as the only business in the current roster focused on developing sustainable growth in Southeast Asia.

“We are proud to be the only Filipino-led fintech startup in this class and excited to be able to showcase the innovative spirit of Southeast Asia in the center of Times Square,” said Valencia, who was in New York with his wife and two children when Plentina was featured last July 2.

“The Nasdaq Entrepreneurial Center recognizes that Plentina has the potential to create massive change in emerging markets by improving the lives of the underserved through advanced technology,” said Colin Mahin, program manager of the Nasdaq Center.

By harnessing the power of artificial intelligence, the company helps individuals who are underserved by traditional banks build good credit scores. The Plentina app offers affordable credit on a buy-now-pay-later platform.

Since the launch of its mobile app last October 2020, Plentina has raised over $3 million in venture capital funding and is moving to scale to Vietnam in the next months.

To date, the Plentina app is used by tens of thousands of Filipinos to access fairly priced microloans and has been downloaded more than 50,000 times since its launch in October 2020.

Download the Plentina app at the Google Play Store: https://play.google.com/store/apps/details?id=com.plentina.app&hl=en&gl=US