My neologism ‘Cuomosexual’ has a new meaning

My neologism ‘Cuomosexual’ has a new meaning 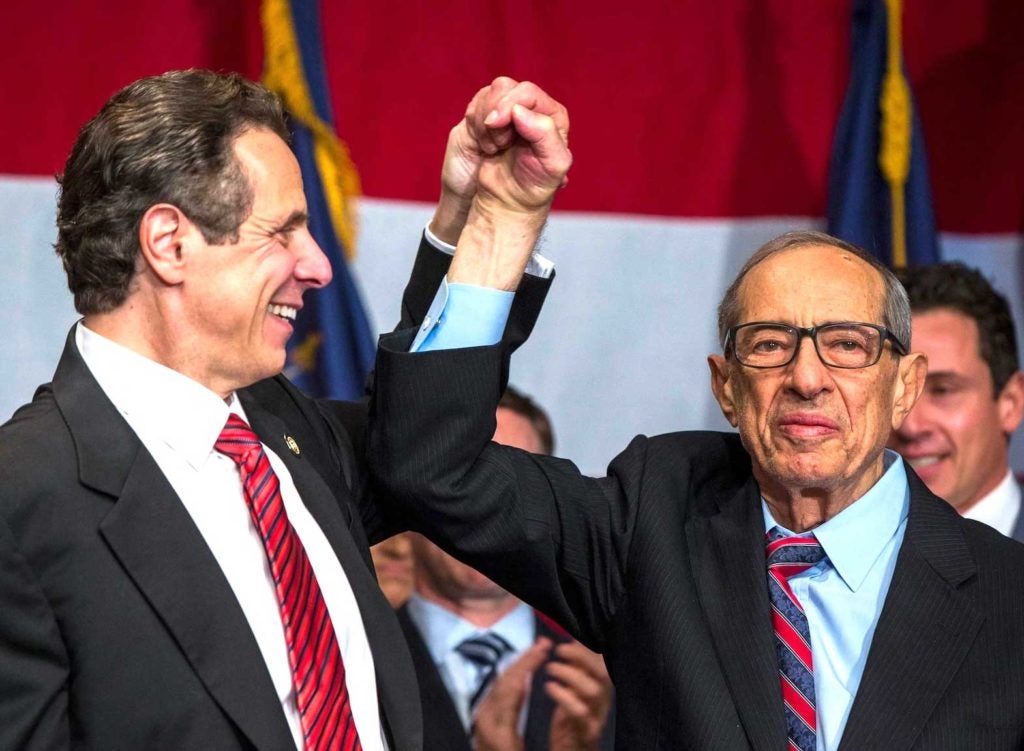 In this column, I herald all the Filipinos I could find at the Olympics, and then declare the post-Olympic Suni Lee the most watchable Asian American in the world.

If you’ve seen the word “Cuomosexual” in print suddenly, or showing up on women’s T-shirts protesting Governor Andrew Cuomo,  I am proud to say that’s my word, my neologism.

I birthed the word 30 years ago and to see it pop up again now in publications such as the New Yorker makes be beam like a proud papa.

And to see it on display in headline form! Why, it’s like seeing your offspring on the balance beam at the Olympics.

Besides making sense, one of the few things a writer can do is make up new words. Not facts, mind you, but words themselves, coinages, one at a time, that then exist to serve the language and the public. Words usually run their course and go dormant. (When was the last time you used “gallimaufry”?) But now the news has given “Cuomosexual” new life.

I can tell you precisely when I first used it, or when I invented the term (though I am not claiming that this is anything like Marconi and his little radio). It’s just a word I made up.

Cuomosexual is a real word that’s both adjective and a noun. It could be in the Spelling Bee.

Birthing it was quick. I was a host (believed to be the first Asian American Filipino) to have his own general interest (meaning “white”) news talk show in the Washington, D.C. market in 1991. I was at the now defunct WRC Radio and talking politics with my friend, the late Andrew Kopkind of the Nation  and the Village Voice.  Kopkind was a vehement radical progressive. I was more left leaning vegetarian Californian. When it came to who should run for the presidency, I fell hard for then New York Governor Mario Cuomo, Andrew’s father.

Why? In a public declaration I  defined my condition. I had “an irrational  love” for Cuomo. I was a “Cuomosexual.” And thus the word was born.

Kopkind laughed at the joke’s originality.  And I used it often during the political season when ultimately Cuomo declined to run leaving me and other Cuomosexuals spurned—again.

My Cuomosexuality never extended to Mario’s kids. And the word has been somewhat dormant until Covid, when Andrew and his CNN brother Chris would talk on cable TV  and express their brotherly love. The brilliant Randy Rainbow also sang the word in a parody last year.

Now the word has emerged describing the people and behaviors in the story involving the 11 women accusing Cuomo of sexual harassment. It’s a serious matter. And I want to see justice for the women.  Meanwhile, Cuomo is going Trumpy and arguing process, as is his right. But the kiss of death may be the support he’s received from the disgraced Rudolph Giuliani.

Me, I’m just pleased the word I coined and lay claim to has picked up  second and third definitions. The word could apply to Cuomo supporters who despite the allegations continue to back the governor.  It could be applied to the women who claim they were made victims of Cuomo’s unwanted sexual  touching, or made to engage with a Cuomo against their will. What a versatile word. English truly is alive, pare!

It’s a small point for a writer who doesn’t make up facts, but who did in 1991 make up that word.

Of course, if you can predate my usage in 1991, I shall drop all bragging rights. Until then, I am the Write Brother of that Kitty Hawk.  Cuomosexual.

And you know Manny Pacquiao would be against that.

By now you know how I feel about the diversion known as the  Olympics. (See previous columns).

On Sunday with more than 203, 601, 642 cases of coronavirus, and more than 4.3 million deaths, can you honestly  say the world really needed a full dose of rhythmic gymnastics?

Or that thing now called artistic swimming, which I call aqua breakdancing.

Or Olympic BMX?  I suppose one can always use a BM, but a BMX?

Of course not. And yet all it takes is one human story and it changes you and the games.

I started warming up when an historic  first gold medal in fencing (women’s foil)  went to Filipino American Lee Kiefer.

But when Simone Biles withdrew from her biggest gymnastic events  allowing for Suni Lee to emerge as the gold medalist in the all-around, the Olympic rings had me hooked.

I was the sixth ring.

I started caring about sprinters, and the middle distance runners. And the hurdlers. Asian, non-Asian, it didn’t matter. And as I was flipping around social media, I noticed Mollie Seidel, running in only her third marathon, challenging the Kenyans to the finish right to the end, two and half hours later. Bronze.

I noticed Jordan Windle, who finished 9th in diving, but had a gold medal story as a 2-year old in a Cambodian orphanage adopted and then raised by a gay American father.

It was more than the games and medals.

I only wish the NBC coverage had allowed me to see more Filipino competitors. Weightlifter Hidilyn Diaz had to win gold to be found. And the boxers? Did America get any boxing? I know Filipinos medaled there. But if you were behind the NBC wall, it felt like being in a totalitarian country.

Where do you find a Filipino?

Thank goodness boxer Nesthy Petecio was able to break through the media wall with stories about her silver medal in the women’s featherweight division.

She was no featherweight as she held up her medal and dedicated it to her country and to all the LGBTQ community.

Sorry I missed middleweight Eumir Marcial and flyweight Carlo Paalam. Odd that you could find rhythmic gymnastics and beach volley ball nearly round the clock these last few days in the U.S.  But boxing? And the Filipino medalists? A desperate low-rated NBC simply made the wrong call.

Still, there were enough good stories that the finale almost had me yelling, “No, no, don’t go away, Olympics, please stay.”

It was those awfully poltergeist-y looking wisps of light, moving and morphing like a viral plume, that brought me to my senses. It  came at the start of the celebratory fireworks, and had the opposite effect. It was more like a jolt of reality. The world is still a viral cauldron. We have work to do—vaccination at an Olympic pace. And it’s a marathon. The thought ended any Olympic feel good.

But like the anchor runner in the relay, NBC had one last montage to recapture that lost feel. The show ended with 11-time medal winner Allyson Felix’s expressing her gratitude, before fading to black. The penultimate video swath is of Suni Lee telling her Hmong American family, “I love you.”

Post-Olympic Suni Lee is going to blow up

Of course, NBC was setting us all up for the Summer of 2024 in Paris. Just as Simone Biles emerged after Rio 2016, the Olympics has made Lee a household name now.

I asked on my shows on www.amok.com if there is a  more watchable,more famous Asian American right now? Not just America, but on this planet? One listener chimed in, “Olivia Munn?”

Are you kidding? What did she do in the uneven bars?

Or an Asian American period. After all these years when the Hmong were the anti-model minority, and the example of our Asian American invisibility, here is the brightest light amongst us and she’s going to Auburn.

Auburn? In Alabama? The least vaccinated place in the United States?

Which is why I hope Lee stays masked and healthy.

The gymnastics program at Auburn, part of the SEC, is stellar with head coach Jeff Graba, whose Minnesota roots, no doubt helped land Lee.

Last week, when Lee won the gold in the all-around social media was bombarded with images, including tweets of Lee by the Cal Gymnastics program at UC Berkeley. How they would have loved to have Lee on their team.

I guess they couldn’t sell her on the Cal campus being 40 percent Asian. And how she’d fit right in, unlike Auburn with it’s 800 or so Asians among 30,000 students.

The Cal congratulatory  tweet is Lee in a classic arms post dismount, with arms raised high and that big Olympic smile.

And now all her images will be gold.

Lee enters college after the NCAA just changed its rules in June that now allows athletes to benefit from their images on t-shirts, hats, memes, you name it. I guess she’s buying the pizzas.

Judging from her actions during the games, I trust her father John Lee, the guy who built the backyard balance beam for her, will remain close to guide her to whatever she wants to do in life.

John Lee’s paralyzed from the chest down, but now it looks that the Lee family will have the means to get all the treatment and care his condition requires.

And Suni? She still gets to do the fun part–to compete and figure out what she really wants out of life.

It’s all part of an Olympic sized  fairy tale that’s really just beginning as Suni Lee enters a unique moment as the most watchable and influential Asian American on the planet.

Emil Guillermo is an award-winning journalist and commentator. He writes a column for the North American bureau. Twitter @emilamok He live vlogs Facebook and  on www.amok.com His podcast is “Emil Amok’s Takeout.”