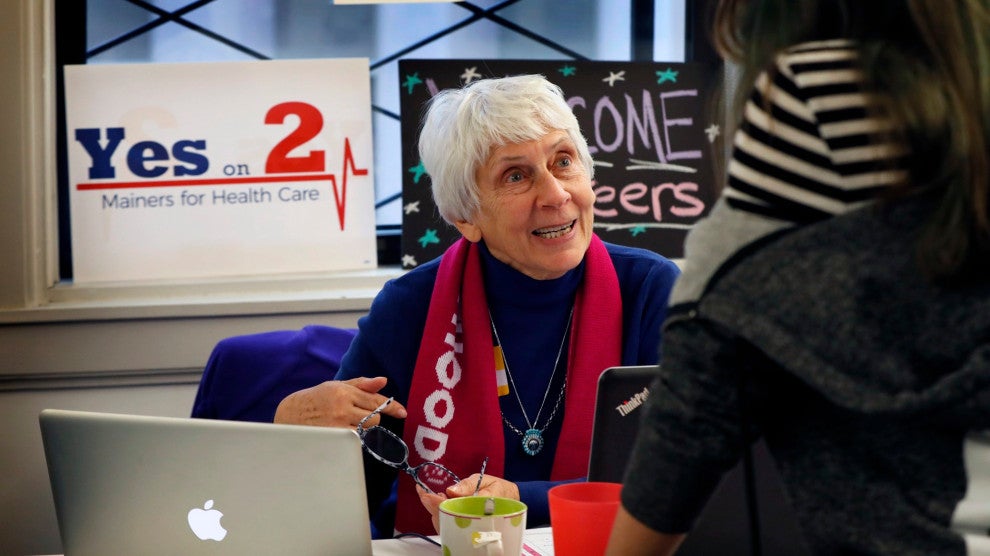 Health care appears to have played an unexpectedly robust role in Tuesday’s off-year elections, as Democrats swept statewide races in Virginia and New Jersey and voters told pollsters it was a top concern.

The health headline of the night came in Maine, where voters by a large margin rebuked Republican Gov. Paul LePage and approved a referendum  expanding Medicaid under the Affordable Care Act. Maine is one of 19 states that has not expanded the program to people with incomes up to 138 percent of the federal poverty line, or about $16,600 for an individual. An estimated 70,000 to 90,000 Mainers could gain insurance under the expansion.

The Legislature has passed similar bills five times, but LePage vetoed each one. And despite Tuesday’s outcome, he held firm in his opposition. The governor announcedWednesday that he would not implement the expansion, which he said would be “ruinous” for the state’s budget, unless it is fully funded by the Legislature.

Medicaid expansion might also be back in play in Virginia. Voters there not only elevated Democratic Lt. Gov. Ralph Northam to the governorship, they may have steered Democrats to a takeover of the state House of Delegates, which has been the primary source of opposition to Gov. Terry McAuliffe’s efforts to expand Medicaid. As of Wednesday morning, Democrats had picked up 15 of the 17 seats they would need to take over the majority with several races too close to call or requiring a recount.

And while it was not a headline issue in the governor’s race, health care proved decisive to Virginia voters, according to exit polls funded by a pool of media organizations.

Health care was by far the top issue for voters, according to the poll, which asked voters which of five issues mattered most to them. Nearly 4 in 10 said health care was the issue most important to their vote, followed by gun policy at 17 percent, taxes at 15 percent, immigration at 12 percent and abortion at 8 percent. Among those voters who cited health care, 77 percent voted for Democrat Northam, making it his strongest issue by a wide margin.

Pollsters were quick to add, however, that at least some of health care’s prominence in the poll was due to the fact that voters were not given the chance to choose issues that are typically more popular, such as the economy or education.

The fallout will depend on who holds which views, said Rodney Whitlock, a former GOP Senate staffer. If health care is a top concern for Democrats, “that doesn’t have a lot of meaning for Republicans,” he said. But if independents are the ones who see health as a salient voting issue, “that means much more.”

But Robert Blendon, a professor of health policy and political analysis at Harvard University, said the election results suggest that health care has again become a positive for Democrats. “You don’t have to say you love the ACA, but that you don’t want to drop millions of people” from coverage, he explained.

In New Jersey, voters said they were more concerned with state issues, with property taxes and corruption topping the list of topics they told exit pollsters drove their votes. But health care was third.

Still, the election results likely hinged on a host of concerns, warned Drew Altman, president and CEO of the Kaiser Family Foundation. Health issues are still strongly viewed through partisan lenses, he said, and the voting probably was more of a referendum on President Donald Trump than on health care. But the results in the Maine referendum could have repercussions beyond that state, showing that Medicaid expansion is “far more popular” than Republicans have acknowledged. (Kaiser Health News is an editorially independent program of the Kaiser Family Foundation.)

In Ohio, voters defeated what some called a confusing ballot measure aimed at limiting prescription drug prices to no more than the amount paid by the Department of Veterans Affairs. A similar measure was voted down in California last year.

Update: This story was updated on Nov. 8 to add more detail about the exit polling.