Hidilyn, Duterte, VFA plus my take on Biles, Suni Lee

Hidilyn, Duterte, VFA plus my take on Biles, Suni Lee 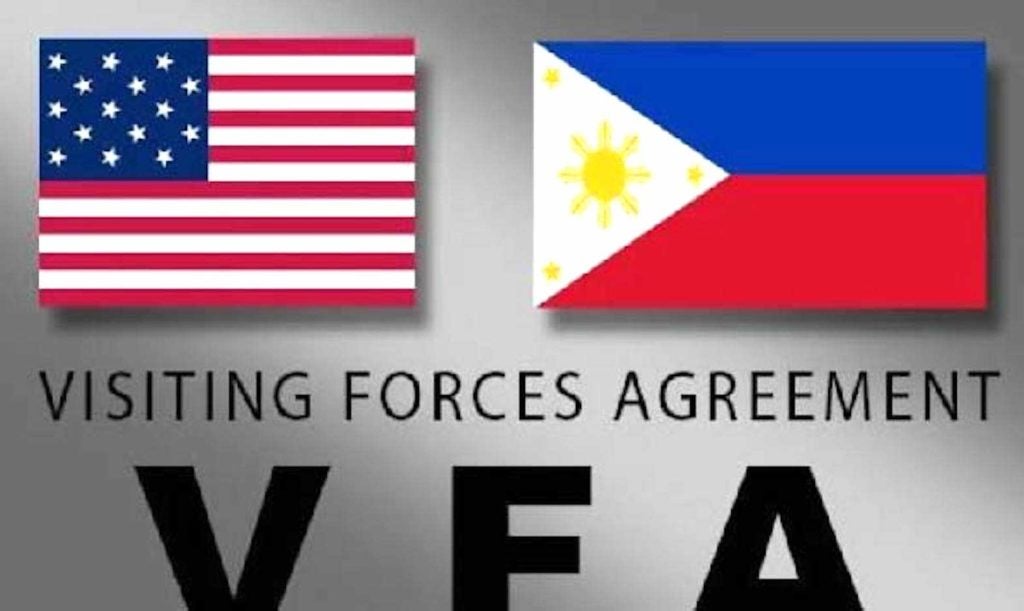 Most Americans don’t realize what exactly “VFA”  stands for.

Is it like the VMAs? (Video Music Awards?) but for “Fine Arts”?  VFA for Vilified Filipino Americans? Like Andrew Cunanan?  Veterans of Foreign Armies?

No VFA is “Visiting Forces Agreement,” and why it’s so special is the reason there’s a Clark and Subic Bay, modern day colonial vestiges. Yeah, that’s not so great. But it can be good. Depends on what you need.

And right now the Philippines needs to stand up to China.

By extending the VFA, President Duterte is playing it exactly the way he should. Heretofore, he was after all talking nationalistic and saying dump the VFA. But not last week. In an about face, the VFA was restored.

China burps and it can immobilize the Philippines. The country needed some backup. So why ignore history and a relationship with an ally who could actually  come to the RP’s aid if China ever loses its cool?

No brainer. But Duterte is so unpredictable. And inconsistent. He’ll still gun down drug dealers at will in the face of human right allegations.

At least he’s on the right side of Covid. He’s on record for wanting to jail unvaccinated people and shooting them with vaccines in the butt.

That’s better than Biden’s talk of offering the unvaccinated $100 dollars.

Makes more sense considering the cost of Covid illness to the medical infrastructure.

Maybe he’s been watching the Olympics and felt ashamed of his China coddling after Filipina weightlifter Hidilyn Diaz won the individual gold in her class after besting her Chinese opponent in the clean and jerk.

Hidilyn’s  was a symbolic act. Like throwing China out of the West Philippine Sea. Duterte had to take notice.

If you hadn’t notice, the Covid Olympics have been worth watching.

For Asian Americans, a great Olympics

What did Suni Lee really do last week at the 2020 in 2021 Summer Olympics? She just smashed the biggest stereotypes that have burdened Asian Americans for generations.

But first she had to jump around in a Tokyo arena.  And that was something special too.

The eighteen-year-old Lee made every Asian American, every Hmong American, every American, period,  proud, when she rose to the occasion last week and won the gold medal in what has become a legacy event for the U.S. in the Summer Olympics.

Lee is the fifth straight American woman to win gold as best all-around  gymnast in the world.  And she did it in her very first Olympics.

It was an individual win. But she did it for the team and her country when Simone Biles, perhaps the greatest gymnast ever, unselfishly, also did something for the team.  Biles unexpectedly withdrew from the all-around, the vault, the uneven bars and the floor exercises when she couldn’t compete. She said she suffered from  the “twisties,” and couldn’t “tell up from down.” When she couldn’t perform, she knew her teammates had the talent to win for the U.S. And she graciously withdrew.

The shift in circumstances allowed Lee who had her hopes simply for silver to get the all-around gold. But then in her own key event, the uneven bars for which its been said she possesses “genius,”  Lee took the bronze on Sunday.

Lee has one more event—the balance beam, the event that kicked off her gymnastics fever as a young girl when her father John Lee built a homemade balance beam for her in their back yard.

But Biles too has just announced she’ll be back for the individual beam event, and now everyone will be watching her this week, especially if she attempts her signature “Biles” move–a dismounting double twisting ,double back somersault that seems to defy gravity, but not always mental health.

It’s what people want to see from the four- time Olympic gold medalist.  But Biles has already done so  much more for these Olympics which  should have been cancelled in the name of public health.

Defying Covid in the midst of a world-wide pandemic really shouldn’t be an Olympic sport.

But Biles has brought to the games something that was lost when the Olympics, with its corporate obligations, continued awkwardly with masks, but without fans in the stands.

They just seem super-human when the Olympic rings are like a yoke on their shoulders.

Biles gets a gold from me for mental health awareness, something nearly everyone is experiencing during the pandemic.

If she competes as planned this week, we’ll all be watching. But take nothing away from Suni Lee.

So what are the biggest stereotypes Asian Americans face? By consensus it’s the “Model Minority Myth,”  and the “Perpetual Foreigner.”

Of the 23 million in the general  “Asian American” category, the Hmong are such a small subset. But it speaks to why one can’t generalize about “us.”

Asian American intra-diversity is so rich. We come from 50 countries, including Laos which has their own Asian American category and number around 254,000.

But Laotians are different from the Hmong, who are from the hills of Laos, but with a unique culture and history. They were also brought to the U.S. after fighting the CIA’s secret war in Laos against the North Vietnamese in the 1960s and ‘70s.

In America, they have been one of the leading exceptions to the “Model Minority” idea, that indeed makes it a myth.

Asians so rich? Among all Asians the median household income is $85,800, whereas the Hmong are at $68,000, according to Pew Research. The data also shows that in the  “Living in Poverty” categort, the overall Asian category is 10 percent. Hmong are at 17 percent. And for those under 18 years of age, the percentage versus for all Asians (10 percent) is at 22 percent for Hmong youth.

Yet, at the same time, the Hmong have their success stories with political leaders emerging in Minnesota, Wisconsin, and California.

And now there is 18-year-old Suni Lee.

When I did my first stories on the Hmong in 2004, I was a columnist in Stockton, California. One of the cultural traditions of the Hmong are for families to offer their young daughters as child brides to older males in the community.

I recall doing a heartbreaking story where a public high school offered day care for the children of 10th-12th grade  Hmong girls. There were at least ten child brides.

Many of their children would be old enough to be young gymnasts now.

It reminded me of the courage—or maybe love—it took for John Lee, Sunni’s father to build that  balance beam for his daughter when she was young.

Balancing being American and being Hmong is not easy.

Even to this day, some Hmong families lean more traditional than not. Perhaps, Suni’s example as a gold medal winner will be a new, better model for a modern generation of  Hmong Americans.

Of course the other stereotype Suni smashed is the “perpetual foreigner.”

You know, that “PF” thing means we don’t belong here. Again. No matter what. We aren’t American. What country are you from, right?

Lee just had to do her thing. No small feat.  She had to step up and perform when given the chance.

Last week, she looked nervous at the all-around event.  With Biles’ blessing and with the champion and the whole world watching, Suni described how she tried to calm down.

“I was just telling myself to do nothing more and nothing less,” she told the Today Show. “Because my normal is good enough. So I don’t need to do anything more or anything less. I just need to do what I normally do.”

But good enough to win for the U.S.A.

How do you put a dent in the “perpetual foreigner” myth?

When in your special Olympics way, you make Americans realize we are all on the same team.

Suni Lee did just that standing on the podium,  eyes lashed, face masked, all American, and  pure gold, as they raised the stars and bars.

Emil Guillermo is a journalist and commentator. He writes a column for the North American Bureau. See his vlog “Emil Amok’s Takeout”  on www.amok.com Twitter @emilamok.