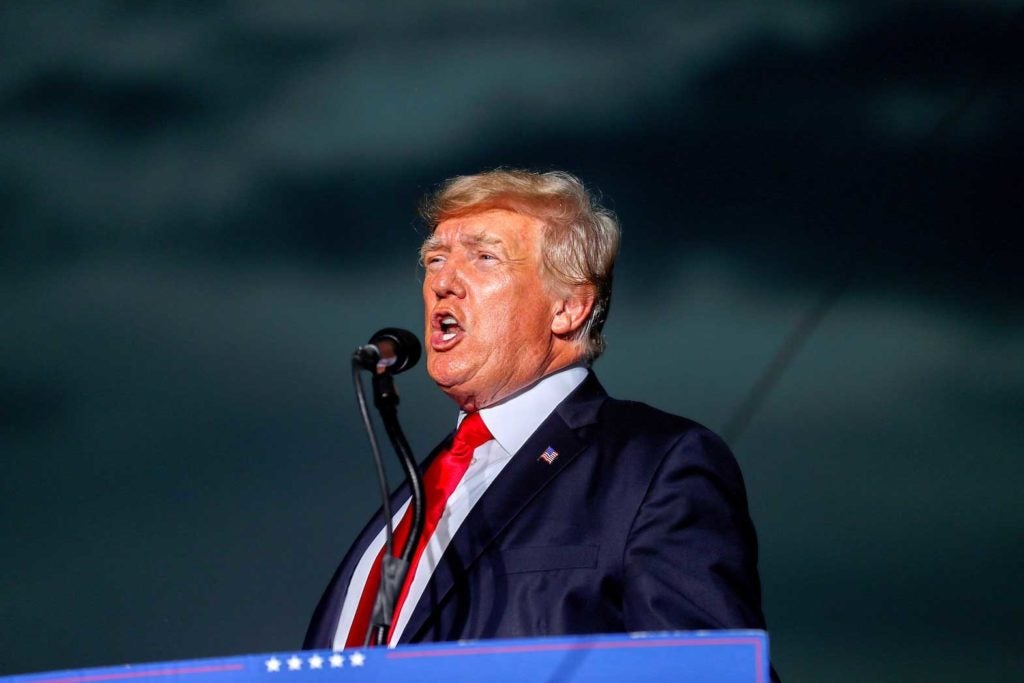 Former President Donald Trump speaks to his supporters during the Save America Rally at the Sarasota Fairgrounds in Sarasota, Florida, U.S. July 3, 2021. REUTERS/Octavio Jones/File Photo

WASHINGTON – Former President Donald Trump suffered twin setbacks on Friday when the Justice Department cleared the way to release his tax records and disclosed a memo showing he had urged top officials last year to falsely claim his election defeat was “corrupt.”

The department, reversing course from the stance it took when Trump was in office, told the Internal Revenue Service to provide the Republican businessman-turned-politician’s tax records to congressional investigators – a move he has long fought.

Trump was the first president in 40 years to not release his tax returns, as well as other documents, as he aimed to keep secret the details on his wealth and activities of his family company, the Trump Organization. The Democratic-led House of Representatives Ways and Means Committee has said it wants the tax data in part to examine whether Trump had taken inappropriate advantage of U.S. tax laws.

Handwritten notes taken by Acting Deputy Attorney General Richard Donoghue in December and released on Friday by the House Oversight and Reform Committee painted a damning picture of Trump as he desperately sought to get the Justice Department to take the unprecedented step of intervening to try to upend his 2020 election loss to President Joe Biden.

The fact that the Justice Department let congressional investigators obtain the notes marked a dramatic shift from the Trump administration’s repeated assertion of executive privilege to skirt congressional scrutiny.

“Just say that the election was corrupt + leave the rest to me and the R. Congressmen,” Trump told Jeffrey Rosen, referring to Republicans, in a Dec. 27 phone call days before Rosen was appointed acting attorney general.

The notes showed Rosen told Trump the department could not and would not “change the outcome of the election.”

Trump’s representatives did not respond to a request for comment.

The Justice Department ordered the IRS to provide Trump’s tax returns to the House panel, saying the panel has invoked “sufficient reasons” for requesting it.

The department’s Office of Legal Counsel concluded it had erred in 2019 when it found the committee’s request for Trump’s taxes to be based on a “disingenuous” objective aimed at exposing them to the public. The committee engaged in a two-year legal battle with the Treasury Department after then-Treasury Secretary Steve Mnuchin defied a subpoena for Trump’s taxes.

In a court filing late on Friday, the Treasury Department said it was prepared to hand over Trump’s tax returns to the committee and would not object to giving him 72 hours’ notice before the documents are handed over.

After another legal fight, the Manhattan district attorney’s office in February separately obtained https://www.reuters.com/article/us-usa-court-trump-taxes/new-york-prosecutors-digging-into-trumps-tax-financial-records-idUSKBN2AP2MS Trump tax and financial records in a criminal investigation centering on his company, though the material was not publicly disclosed.

During Trump’s presidency, the Justice Department was accused by Democrats of bending to his personal and political goals. Its recent actions illustrate a different approach under Biden.

The department “is no longer going to simply kowtow to Donald Trump,” said University of Minnesota law professor Richard Painter, who was ethics counsel to former President George W. Bush.

“Every other president has disclosed their tax returns, and finding out what the conflicts of interest are on the president or a former president who may have made decisions that now have to be revisited – that’s critically important,” Painter added.

It has been a tough week for Trump. Four police officers on Tuesday testified https://www.reuters.com/world/us/police-who-defended-us-capitol-testify-riot-probes-first-hearing-2021-07-27 to a House panel about the violence of his supporters during the Jan. 6 Capitol riot.

Clark is at the heart of a Justice Department inspector general’s office inquiry https://www.reuters.com/article/us-usa-trump-justice/watchdog-to-probe-if-justice-dept-officials-improperly-tried-to-alter-2020-election-idUSKBN29U21E after news surfaced that he had plotted with Trump to try to oust Rosen so he could launch an investigation into alleged voter fraud in Georgia. Clark did not respond to a request for comment.

In the Dec. 27 call with Rosen, Trump threatened to put Clark in charge, the notes showed. Throughout the call, Trump pushed his false election claims. “You guys may not be following the internet the way I do,” Trump said.

Rosen and Donoghue tried multiple times to tell Trump his information was incorrect.

“We are doing our job,” the notes stated. “Much of the info you’re getting is false.”