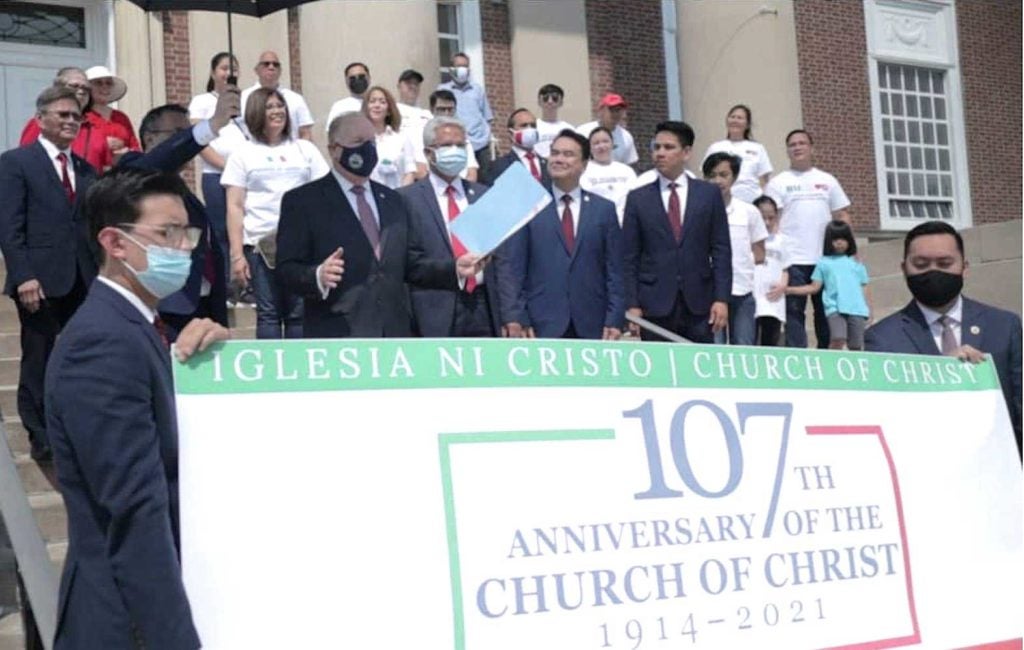 Mayor J. Christian Bollwage read the proclamation on the steps of City Hall, with some ministers and members of the INC present. CONTRIBUTED

Mayor J. Christian Bollwage read the proclamation on the steps of City Hall, with some ministers and members of the INC present.

“What this church has done by encouraging the young people of the church to work on cleanups throughout the community is how important it is to have a safe and clean environment in which you live, work and attend church,” Bollwage stated, according to INC’s public information office.

Later in the evening of July 27, in the New Jersey state capital of Trenton, the Lower Trenton Bridge was lit up in green, white, and red in honor of the INC anniversary.

The Iglesia Ni Cristo was first registered in the Philippines on July 27, 1914 by its first Executive Minister, Brother Felix Y. Manalo. After 107 years, it has spread to 158 countries and territories with its members belonging to 147 nationalities and races.

MOST READ
usa Common NFT Scams and How to Avoid Them
usa Texas school shooting victims: ‘They were just children with their whole lives ahead of them’
usa University of Hawaii names nursing school after PH-born nurse
usa Top 10 Electric Bikes to Fit Every Lifestyle
usa Toronto police shoot and kill man carrying gun near schools
usa MagSafe: Effortless and wireless charging for iPhones
usa Elon Musk Twitter Bid Restructured and Nearly Complete
DID YOU KNOW?
The 25 Best Co-Op Games You Should Play for PS4 in 2022
The Best Kindle of 2022: Which one should you buy?
A Beginner’s Guide to Buying a Vacuum Cleaner in 2022
Island Hopping in Tulum: The 12 Best All-Inclusive Tulum Resorts
How to Dispute a Debt and Win | Simple Tactics
The 12 Best Lat Exercises for Muscle Growth