NEW YORK — It’s that time of year again when Filipinos and Filipino Americans from various organizations come together for nine consecutive Yuletide nights of prayer and camaraderie.

A unique opportunity for networking, raffle prizes, giveaways and traditional noche buena await all attendees after each Mass sponsored by assigned organizations.

A returning diplomat to New York, Olive Magpile is familiar with most of the community members involved. She recalled: “It started in 1986, but we had a two-year  gap in 2012 and 2013, it would have been on its 31st year now.”

This year’s Simbang Gabi will kick off on December 5, with the Coalition of Schools namely, Assumption, Ateneo, De La Salle, College of Holy Spirit, San Beda, St. Theresa, St. Scholastica, St. Paul, Maryknoll/Miriam and Letran.  These were the schools active during the recently concluded Homecoming Sa Konsulado. Other schools not listed are welcome to participate, the organizers clarified. 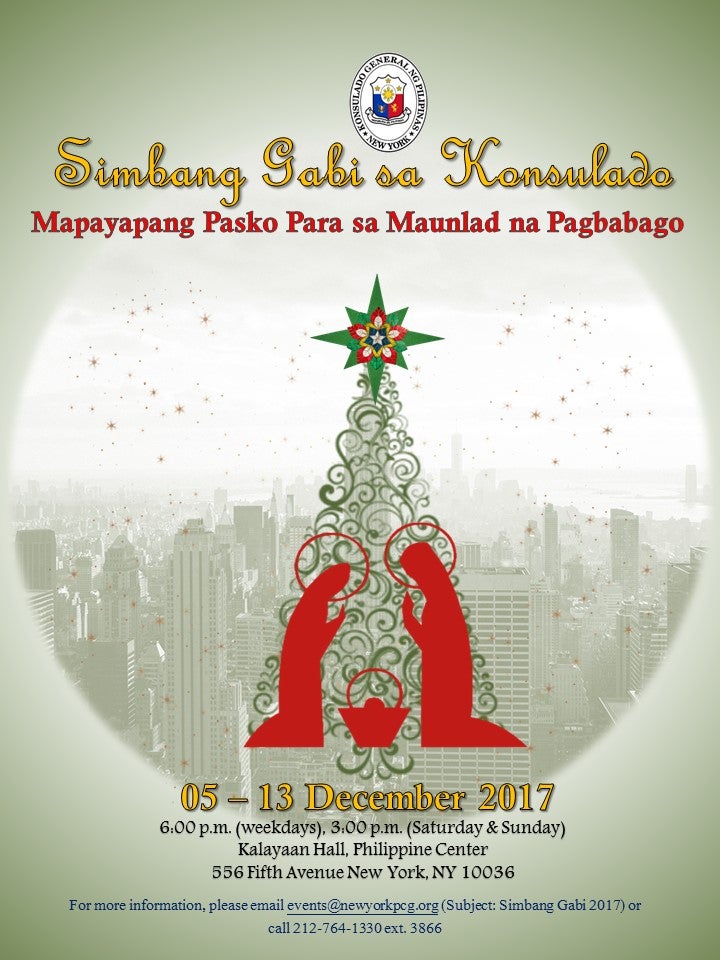 The last night of Simbang Gabi will be on December 13; it is traditionally hosted by the Philippine Consulate General of New York, joined in by the officers and employees of other government agencies including the Permanent Mission to the UN and the Department of Trade and Department of Tourism NYC. Each night, the organizations invite priests to con-celebrate the mass. The next planning meeting is scheduled on November 16 at the Philippine Center.

Meanwhile, as soon as the evening masses end at the Consulate, churches across the tri-state area will be holding their own Simbang Gabi traditions. The St. Francis of Assisi of New York City will hold its masses from December 15 to 23, at 6:15 p.m., led by the 33-year- old active Filipino Ministry, Ugnayan Filipino. Sponsorship of the nightly masses and choir groups are welcome; contact [email protected]

Not surprisingly, of all the immigrant communities, the Filipino Ministry has its own space at the Church website that so aptly describes the faithful Filipinos away from home. UGNAYAN is a committed Filipino community at St. Francis of Assisi Parish that seeks to live the gospel and express love for Christ through prayers and ministry to one another and others in need and to lift the spirit of the alienated and the newly arrived by creating a “home away from home.”