Homelands for the unvaccinated

Homelands for the unvaccinated 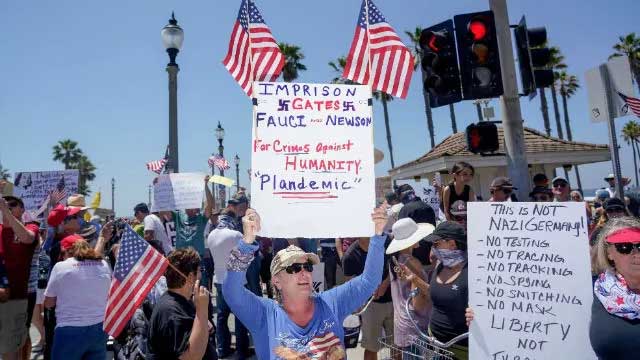 Are they avatars unafraid of death?

Or are a great many of them desirous of being noticed at the cost of considerable opprobrium and even their own lives?

Each one is at one and the same time both masochist and sadist. In the twisted universe that we are in right now, such a paradox is not only possible but actual, living reality.

Masochist, seemingly eager to bear the slings and arrows of the queen virus in order to die what would normally be a miserable and lonely death, but is catnip to the steadfast devotee of pain.

Sadist, for being a bearer and transmitter of COVID-19, rejoicing in the pain inflicted on others. The more aggrieved, the merrier!

Fox News, a/k/a Faux News, with such talk show hosts as Tucker Carlson and Laura Ingraham leading the way, has been one of the prime actors in discouraging the unvaccinated, or at least seeding their minds with doubt, from getting their shots, and thus moving their community, and the nation, towards a safer place, where the threat of being infected with the delta variant of Covid-19 is minimal.

Nor are they the only Pied Pipers leading lemmings to the precipice. Other fountains of poisonous disinformation, per the Center for Countering Digital Hate, can be attributed to twelve individuals the Center has labelled the “Disinformation Dozen.” Or one can call them the Twelve Apostles, in thrall to the Deity of Ignorance, its representative on Earth being His Holiness Donald J. Trump.

Apparently numero uno of these 12—their Peter, if you will—is an osteopath and successful entrepreneur by the name of Joseph Mercola, who has his company offices in Florida, a Republican-led state that is, appropriately enough, one of the top hotspots where COVID-19 infections are on the upswing, especially and mostly among those who will have nothing to do with the vaccine.

Online and on social media Mercola spread the false claim that the antivirus vaccines were “a medical fraud” and that they were useless in preventing the spread of COVID-19. Not only that, but the vaccines would “alter your genetic coding, turning you into a viral protein factory that has no off-switch.” All such claims are unfounded, but nevertheless have been picked up by anti-vaccination proponents and spread through the Internet.

It would be too easy, not to say patronizing, to dismiss such fearmongering. Instead, out of respect for their constitutional rights we the vaccinated should call on our reserves of patience to listen to the unvaccinated, but still follow safety protocols.

Since social distancing is one of the essential ways that the virus can be staved off, the unvaccinated can be placed in some remote area, far away from the rest of us, where they can continue to breathe on each other in the sublime exercise of practicing their individual freedom while waving banners emblazoned with the slogan, “Don’t Tread on Me,” to which perhaps may be added the phrase, “But Please Continue to Breathe on Me.”

Where would they be based? In an arrangement similar to what the apartheid regime of South Africa once had, the freedom-loving, science-fearing citizens could have one or more homelands. Perhaps a generous portion of Texas might do, as would a similar slice of Florida. Or perhaps the Bikini Atoll way out in the Pacific, with enough sun and surf for even the most ardent sunbird.

Again, respecting their constitutional rights, the unvaccinated should have no impediment to moving freely about, visiting the rest of Texas or Florida or other states, for instance. But just to distinguish them from the vaccinated, it would be wise to bell the cat, i.e., have each one wear a small bell around their neck as apparently lepers were required to do so in biblical times.

The tinkle would be a gentle reminder of their presence and the need to put at least six feet between yourself and the visitor. Please remember to smile and be polite, not out of courtesy but out of caution: should you irritate or anger that person, he or she may rant and rave and thus fill the air with possibly life-threatening aerosols. It is exactly the protocol you would follow when faced with a possibly rabies-infected dog. You may be vaccinated but why take a chance?