One despicable legacy: Culture of death

One despicable legacy: Culture of death 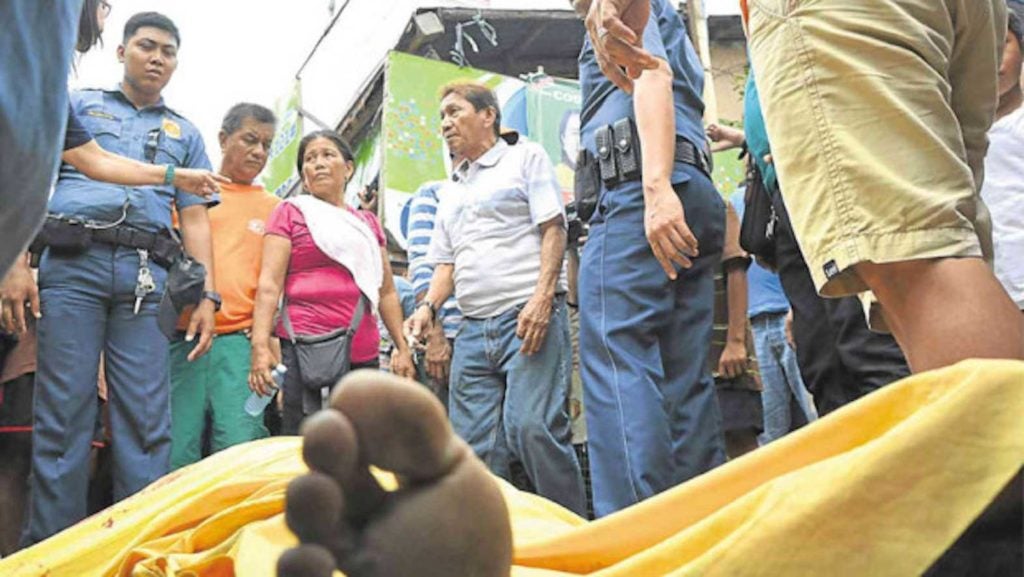 Funeral parlor workers lift the body of one of the two drug suspects who were killed in an alleged shootout with police in Barangay Bonuan Tondaligan in Dagupan City on Monday. RAY B.ZAMBRANO/INQUIRER NL

He also asked Senator Ronald de la Rosa, the former PNP chief, to gun down the police officer/s who imported AK-47 and supplied the weapons to communist rebels. “Many soldiers died because of the arms they brought into the Philippines. So my orders to you… shoot them dead,” he said. De la Rosa, like Duterte, is also facing charges at the ICC for his role in the brutal war on drugs.

Some of us do remember 17-year-old Kian Loyd delos Santos, who was murdered in 2016, by police officers conducting an anti-drug operation in Caloocan. CCTV captured three uniformed law enforcers dragging the teenager, wearing boxer shorts, into a dark alley and several witnesses testified the police forced a gun into his hand and shot him as he kneeled on the ground.

Two days later, teenagers Carl Arnaiz and Reynaldo de Guzman went missing in their Cainta residence and their bodies were later found with Arnaiz shot dead by law enforcers while de Guzman was stabbed 30 times. Both were suspected of using drugs.

The execution of the teenagers – Kian delos Santos, Carl Arnaiz and Reynaldo de Guzman – were “isolated cases,” if we were to believe the official police stories. Most recently, the ICC Prosecutor counted 12,000 to 30,000 dead bodies of civilians killed between 2016 and 2019 in connection with Duterte’s War on Drugs (WOD), a fact that immediately nullifies the only-isolated-cases alibi.

In order to put a historical perspective to his legacy, we recall that in September 2016, three months into his presidency, Duterte likened his WOD to Hitler’s Holocaust. “Hitler massacred 3 million Jews (incorrect statistics by Duterte). Now, there are 3 million drug addicts,” he said, “I’d be happy to slaughter them.”

Adolf Hitler became Europe’s mad scientist whose Frankenstein monster was Nazism and the first victims were the Jews. It was a cruel time when the Führer played God without divine permission by deciding who lived and who perished.

The Nazi regime became Germany’s unstoppable monster, animated by Hitler’s ideology of Aryan supremacy, making him a merciless dictator who dared to judge other people as “subhuman,” the basis for the murder of all Jews, defective children in the womb, the comatose, inutile grandparents in the home of the aged, and prisoners in the death row – everything in an open defiance of the 5th Commandment: “Thou shalt not kill.”

Nazism was so monstrous that it utilized a network of four thousand facilities in Germany and German-occupied territories, and used over 200,000 personnel as Holocaust perpetrators, acting as gas chamber facilitators, poison scientists, and laboratory technicians.

In January 2016, a few months before the Duterte regime, Pope Francis made his first visit to Rome’s Jewish community, where he said: “Let’s unite against war and violence… The violence of man towards man is in contradiction with every religion worthy of this name.”

War, war on drugs, shoot-to-kill orders, and violence make up Hitler and Duterte’s “culture of death” legacies. Do we want this legacy perpetuated by his successor? Can we do something about it?