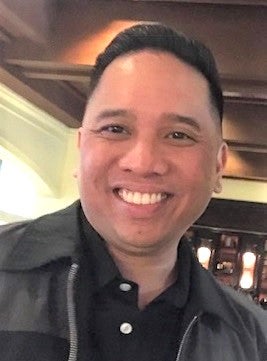 Rogelio Santos Jr. is the first FilAm to receive the TOYM Award. CONTRIBUTED

(This article is part of a continuing series on Filipino Americans who have returned to the homeland, lured by more fulfilling careers and an opportunity to bridge and embrace their two cultures.)

NEW YORK — Rogelio Santos Jr., also known as “Vonz,” is the first US-born Fil-Am to receive the prestigious The Outstanding Young Men (TOYM) Award. He earned it in 2015 in Manila, in the field of social entrepreneurship.

Vonz, 38, was born in Orange County, California but spent much of his youth growing up in New Jersey, where he attended school at East Brunswick High School and Middlesex County College. He eventually enrolled at the New Jersey Institute of Technology (NJIT) where he would earn his Management of Information Systems (MIS) degree.

By the time he was 18, he was already working as a chief architect in Wall Street, building information systems for financial technology firms, which definitely equipped him with strong technical expertise and practical knowledge on a wide array of technology devices.

By the early 2000s, Vonz had decided to jumpstart his own outsourcing company in the Philippines at a time when outsourcing was a budding industry.

“Global Business Process Outsourcing (BPO) was the buzz in the early 2000s in the Philippines,” Vonz said. “India was talking about it, along with South America and Puerto Rico.” 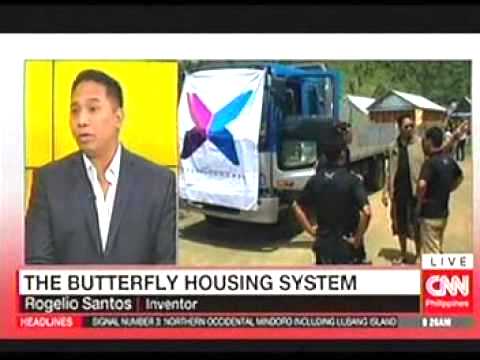 Santos being interviewed on CNN Philippines on his Butterfly House project. an innovative and affordable steel-framed portable emergency shelter for displaced families affected by natural and man-made disasters. SCREENGRAB

He ventured into BPO in 2003. What happened next was beyond his wildest dreams.

“In 2005, I sold my first company and made a deal with my investors/buyers to buy my company but that I would keep my Philippine operation. My CEO friend also wanted to get involved, and as a favor, he set up for me a small shop, and within a year, I got around 150 people working in my outsourcing company; so basically as an accidental outsourcer as a favor to a friend, I got a multimillion business overnight!”

Within that period Vonz was inspired to create jobs for people in the Philippines, especially in poverty-stricken areas. Vonz discovered how adapting to the local culture took some time to understand and work through. His accented Tagalog clearly made him stand out, and he didn’t share the same experiences with those who were born and raised in the Philippines.

“I see a lot of Fil-Ams come here and make mistakes by being cocky and thinking that they know to ‘fix’ a Third World country with their own First-World approach to conducting business, which I’ve learned is not the smartest thing in that you cannot just force ideas down people’s throats with regards to the locals here,” he observed.

“While Filipinos are great assimilators in American society, when I came here to the Philippines I realized that my own people had their own set of social and cultural issues, and that it took more than industrial movers/shakers like myself to play a role in the business scene here in the country.” 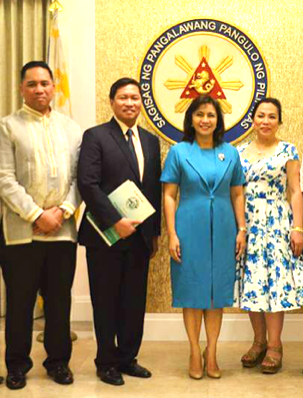 Vonz and parents, Roger and Josie Santos, who are active with Couples for Christ in the U.S., pay a call on Vice President Leni Robredo. CONTRIBUTED

After establishing his outsourcing company, Vonz’s clientele steadily grew. Ernst & Young has named him one of the top 30 entrepreneurs for 2008, for bringing business to the Philippines and creating jobs. The nation’s English-speaking market compelled him to bring corporate focus on knowledge process outsourcing (KPO), which concentrates on software development and architectural design.

By 2010 his company had been invited to build systems for such organizations as Gawad Kalinga, and though he operates on a non-political agenda, he was even hired to work as digital marketing campaign manager for that year’s Philippine presidential election, particularly for the campaigns of then-candidates Benigno S. Aquino III and Jejomar Binay, both of whom went on to get elected President and Vice-President respectively.

Among his company’s greatest contributions has been the creation and distribution of the folding Butterfly House, which is a portable emergency shelter funded by USAID. It has been distributed to hundreds of families in Tacloban who were displaced by the 2012 Typhoon Yolanda. It is also being disseminated among refugees in Marawi City, Mindanao, which was badly damaged by this year’s Maute terrorist siege. Due to the durability and practicality of the Butterfly House, it is now being used by such international entities as the United Nations.

Vonz credits his success as a rising philanthropist in the Philippines to his reliable team of retired CEOs/executives who have innate knowledge of the country’s business climate.

Even though he considers his spoken Tagalog to be still “laughable,” he acknowledges that he and his fellow board members do speak the same language of “what makes sense.”