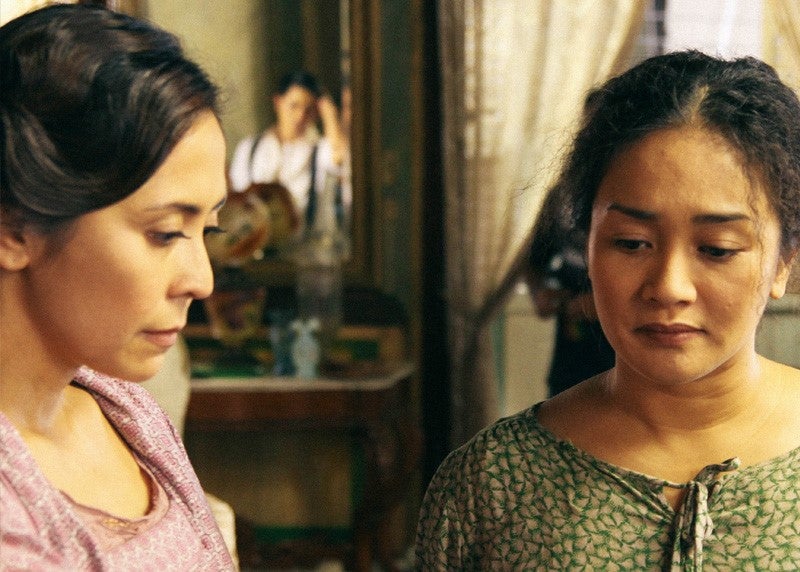 SAN FRANCISCO — “Ang Larawan” (“The Portrait”), a Tagalog musical adapted from Nick Joaquin’s play “A Portrait of the Artist as Filipino,” will be screened with English subtitles on November 9 at the Cinematografo International Film Fest, Kabuki 8 Theaters.

Variety has praised the film as “stunning … impeccably performed and crisply photographed … Clearly made with the utmost love and care … beautifully decorated and top-notch in every technical detail,” based on the film’s world premiere at the Tokyo Film Festival on October 29.

Directed by Obie-award winner Loy Arcenas, the film features Filipino actresses Rachel Alejandro and Joanna Ampil as the Marasigan sisters. The two are having financial difficulties and must decide if they should sell their father’s last great painting.

“This movie is our love letter to Filipinos everywhere to look back at our heritage,” says Arcenas, who will be at the screening together with Alejandro for a talkback session with the audience.

“The core of the story is about commerce versus art and love for family. We want our Filipino American youth to think about what is truly important in life,” says producer Girlie Rodis. “Candida and Paula could make a fortune selling the painting and their lives could change. It’s important for us to know what’s behind their final decision.”

Libretto is by Philippine National Artist for Theater and Literature Rolando Tinio (who studied for a master’s in Creative Writing from State University of Iowa) with music by Ryan Cayabyab.

Arcenas designed sets for Broadway and Off-Broadway productions and directed theater in New York with groups such as Ma-Yi Theater (“Flipzoids,” “Romance of Magno Rubio”) before shifting to filmmaking in the Philippines.

Ampil is a mainstay in West End musicals and has played Kim in “Miss Saigon,” Mary Magdalene in “Jesus Christ Superstar,” Christmas Eve in “Avenue Q,” and Fantine in “Les Miserables.” Her most recent credit is Grizabella in a UK touring production of “Cats.”

Production design for the film is by Gino Gonzales, who has a master’s degree in set design from New York University and recently won 2nd place in the costume category of the World Stage Design competition earlier this year.

First published in 1952, Philippine National Artist for Literature Joaquin’s “Portrait” has been a staple on Manila stages both in English and in Tagalog translations. Director and theater teacher Edgardo de la Cruz staged the English version at University of Hawaii Manoa in the early ’70s. Ma-Yi Theater staged it in New York in ’97.

Joaquin had written “Portrait” at the behest of his sister-in-law, theater actress and director Sarah Joaquin (who later retired to Washington, DC and staged Filipino productions there in the ’90s).

Lamberto Avellana’s Barangay Theater Guild edited down Joaquin’s original script to the definitive staging version. He also directed a film version in 1965 (which can be viewed here).

In 1997, Musical Theater Philippines (Musicat), now Culturtain Musicat Productions, headed by singer Celeste Legaspi and producer Girlie Rodis, commissioned and staged “Ang Larawan” at the Cultural Center of the Philippines, with Legaspi playing one of the sisters.

A bit of trivia: Musicat has also produced a musical, “Katy!” on the life of jazz and bodabil (Filipinized vaudeville) singer Katy de la Cruz, who was popular in Manila in the 1920-30s and performed at San Francisco’s Forbidden City nightclub in the late ’40-‘50s.

To celebrate Joaquin’s birth centenary, Penguin Classics (headed by publisher Elda Rotor) published “The Woman Who Had Two Navels and Tales of the Tropical Gothic” earlier this year, a collection of his works that includes “A Portrait of the Artist as Filipino.” The book has a foreword by New York-based writer Gina Apostol and an introduction by scholar Vicente Rafael.

Culturtain Musicat has also published a book “Ang Larawan,” which includes the Tagalog libretto, the English play, the Tagalog screenplay, and behind-the-scenes photos of the filmmaking process. Limited copies are signed by the film’s actors.

“This material was originally written by Filipino genius Nick Joaquin in English but the soul of the story is Filipino. Then it was translated into Tagalog by another genius Rolando Tinio. They are both National Artists. The music was created by Ryan Cayabyab, who obviously will one day become a national artist,” says Rodis.

Cinematografo International Film Fest runs Nov. 9-12 and features shorts and documentaries by Filipino American filmmakers and full-length films from the Philippines. (List of films can be seen here.)