Shibby de Guzman: Only 14 but already fighting for human rights

Finally, after a year-and-a-half of terrible news, an upbeat story every Filipino should celebrate.

After naming the Philippine president who inspired a campaign of mass slaughter among this year’s most influential leaders, Time Magazine just honored one of the courageous Filipinos defying Rodrigo Duterte’s fascist regime.

Shibby de Guzman is one of Time’s 30 Most Influential Teens of 2017. This is important on two counts.

It underscores the international attention that the Duterte Slaughter and other abuses under this government continue to attract.

And it highlights the important role young Filipinos are, can and will no doubt play in the struggle to end the Duterte nightmare. 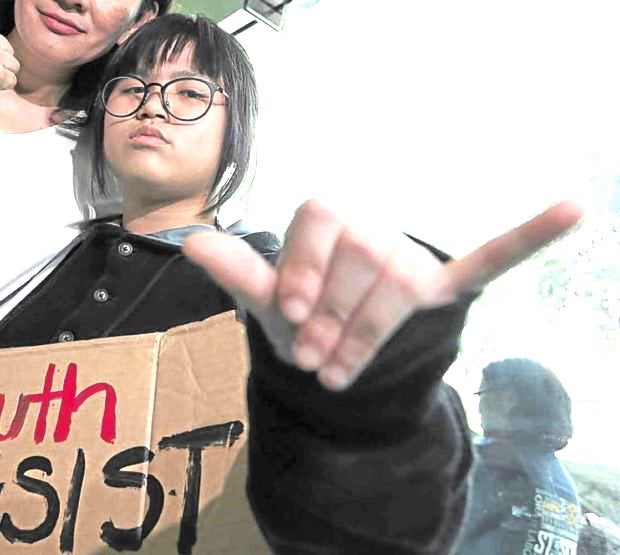 Shibby de Guzman is an inspiring example of what young Filipino can accomplish in this fight. Again this must be stressed: She’s only 14!

Ask yourself what you were doing at that age. I wasn’t out in the street protesting and calling out the abuses of a fascist government. Granted, this was in the 1970s when Ferdinand Marcos was at the height of his power and speaking out in any way was extremely dangerous.

Still, de Guzman has been speaking out in arguably a more dangerous time as Time said in the story about her: “It’s a risky move to speak out against Philippine President Rodrigo Duterte, whose brutal war on drugs has left thousands dead.”

That same head of state has told the European Union to “go to hell” for raising concerns about human rights in the Philippines and called Oxford University “a school for stupid people for exposing his use of online trolls to attack critics and jailed opposition leader Senator Leila de Lima,

“None of this has deterred de Guzman,” Time said, noting how de Guzman helped lead a street protest against the decision to bury Marcos at the Libingan ng Mga Bayani and how she decried the Duterte’s bloody campaign by wearing a cardboard sign that said, “Lahat Tayo Posibleng Drug Pusher.”

Now, that’s a young Filipino with courage and grit. In an interview with the INQUIRER, de Guzman displayed another trait that will be critical in waging this fight: humility.

Asked about being included in Time’s list, she said: “I think that I didn’t really earn my spot, but I did use the opportunity to do good. I just thought that it was the right thing to do.”

Young Filipinos today are sometimes portrayed as apathetic and obsessed with shallow preoccupations on social media networks. They’ve also been accused of being clueless about our past, specifically the fascist terror we endured as a nation under Marcos.

De Guzman has debunked such views. And she’s not alone.

A few weeks ago, I wrote about Matthew Flores, a 16-year-old Xavier School student who wrote about activist Susan Quimpo’s talk at his school on the Marcos years.

“After the talk, I was compelled to ask myself, ‘What am I called to do? What do I do now?’” Flores wrote in an essay. “I believe the best way we can properly honor the Martial Law victims is by making sure it doesn’t happen again.”

Other young Filipinos are also pushing for a more engaged and critical conversation on recent Philippine history, especially the victorious struggle against the Marcos dictatorship.

In a 2015 essay, fellow INQUIRER columnist Oscar Franklin Tan argued that “we unconsciously shroud the Edsa Revolution in myth, saying ‘Myth is simply not credible to a critical YouTube generation who value authenticity and readily accept flawed heroes.’”

It is also a generation fully capable of fighting back in the face of repression.

As Shibby de Guzman said when she and others like her were accused of being brainwashed by Duterte supporters: “Please do not underestimate the youth. We completely know and understand the injustice we are protesting against.”