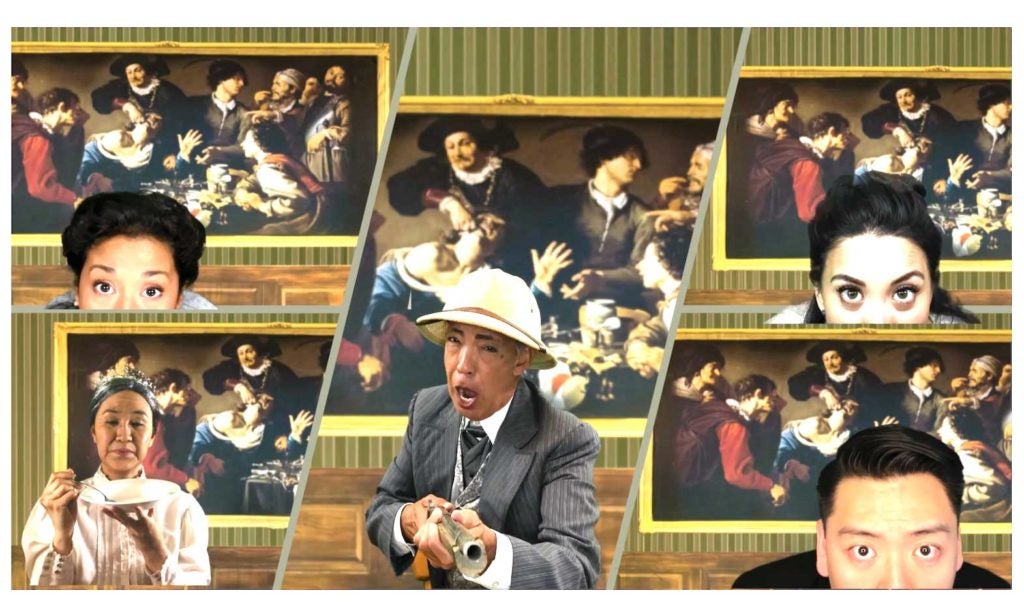 LOS ANGELES—Filipino stars were among the all-Asian American production “CollaborAzian” called A Gentleman’s Guide to Love and Murder, a July 15 fundraiser for the Stop AAPI Hate organization.

“Our show is rare because it has put a group of Asian theater artists in positions and roles that we wouldn’t normally be considered for due to implicit biases,” said music director Steven Cuevas.

“Events like this help give our community visibility and continue to show the world how amazing we are,” said producer Jeremiah Abraham, CEO of Tremendous Communications.

This virtual show and production were far from what many Asian Americans have experienced in the theater industry, and its virtual panel enthusiastically noted that they hope it isn’t the last “CollaborAzian.”

“I’ve experienced racism in the theater industry in the form of microaggressions,” said Cuevas.  “Like when a cast member jokingly calls me by the name of the only other Asian musician in the show.” Microaggression like this can blossom into systemic biases and inequality in areas such as hiring, he explained.

Broadway star Lea Salonga recounted her own experience with racism: “Many years ago, my agent at the time called me to say he would be submitting me to audition for a new production of a Broadway musical. Ten minutes later, he calls back to say that the casting people won’t see me because I’m Asian.”

It was a rude awakening to a problem that was pervasive at the time. Things went better for Salonga though. “A few months later, I was cast in Les Misérables as Eponine. All’s well that ends well.”

Salonga says there’s a mistaken notion that if you criticize something it immediately means you hate it.  “On the contrary, that only means you love it so much you want things to get better,” she  said. “It’s one thing for our community to point out things that can still be improved, but the receiving party also needs to be open to hearing it. We can’t be shouting into a vacuum.”

“In the midst of terrible crimes against AAPIs, we cannot be silent about it; we need to be seen and heard until change happens,” said Cuevas

“Perhaps one reason we’re attacked is because we tend to clam up and stay silent,” noted Salonga.

“During the pandemic, the ones that were attacked were usually the elderly. People that are perceived as weaker and can’t fight back. Well, the younger generation stood up, spoke out and fought back for them,” Salonga said of the cases of hate during the pandemic.

Since the COVID-19 pandemic, Asian American communities and networks such as the Stop AAPI Hate organization have made an effort to speak out about cases of increasing racism.

“Within the past year and a half, people have finally started to call out the systemic racism and white supremacy that have been driving forces of America since its infancy. People forget that there is an ugly history of the mistreatment of Asians in America; they also forget that Asians have been in this country as valuable members of society for centuries,” stated Cuevas.

He further stated: “I am proud to be a child of Filipino immigrants and a first-generation Filipino American. That said, if there is injustice, we must speak out about it. If we see injustice happening to members of our own community, we have to defend ourselves and make others aware of how we are being unjustly treated.”

The Stop AAPI Hate organization is a nonprofit coalition that tracks incidents of anti-AAPI hate and discrimination in the United States.

At the beginning of July, the Stop AAPI Hate organization published a survey on state and local resolutions and found that “only 18 states and 49 of 3,073 (1.6%) counties have enacted resolutions in opposition to anti-Asian hate.”

“No one will know what’s really going on if those questions aren’t asked,” said Salonga.

“Organizations like Stop AAPI Hate can help spread these figures of injustices to those who are ignorant or uninformed, and this visibility will help to create change for the better,” said Cuevas. “We are worthy, our talents are viable, our passions are real, our dreams are attainable, and we’re already among you and ready to go.”

“All of our proceeds go directly to this amazing and necessary organization [StopAAPIHate.org].We have raised over $22,000 for the cause and are continuing to accept donations until Wednesday.”

“This generation of Asians and Asian-Americans isn’t going to take it anymore!” said Salonga.

A Gentleman’s Guide to Love and Murder will be available on Broadway On Demand until July 28. To donate to Stop AAPI Hate and purchase tickets, please visit http://bit.ly/collaborazian-ggtlm.