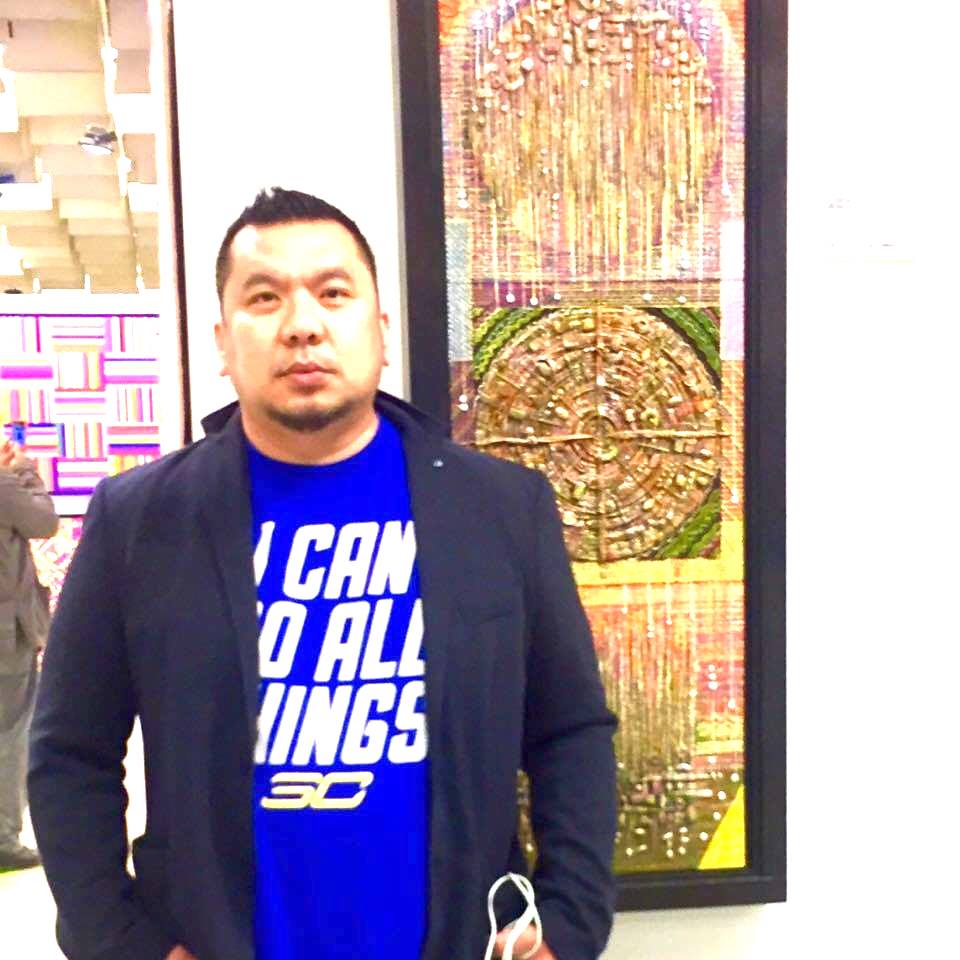 “Last year, I was just browsing the Internet looking for art galleries and art competitions when I stumbled onto the Florence Biennale, which was open for submissions of art portfolio. So I tried and submitted images of my art work along with my bio and statement,” recalls Jun Gueco Cruz or Junbap, a dialysis nurse by profession in Pennsylvania.

Cruz, from Angeles City, Pampanga, started young as an artist influenced by the lively arts of Pampanga. He won several major art contests in the Philippines including the Remy Martin Public Art Competition Grand prize in 1994, the 1998 Art Association of the Philippines Centennial Art Competition Best Entry in mixed media, the 1999 Juror’s Choice in sculpture, and as finalist in 2007 Philippine Art Awards.

In 2008, his family immigrated to the United States.

Cruz describes himself as a visual artist who sought to deliver his lessons on the science of life by creating massive representations of life processes on a cellular level as well as human anatomy. His training in art relied mostly on experiments and workshops. The XIth Florence Biennale’s website says it “aims at contributing to envision a future in which creativity and sustainability are inspiring principles of an artistic and cultural ‘ecosystem’ within a world that is respectful of nature and life forms on Earth. In this perspective cultural diversity and biodiversity do not exist in separate and parallel realms, but are part of a kind of co-evolutionary process that needs to be preserved and nurtured.”

The exhibition was held on October 6-15, 2017 at Fortezza da Basso in Italy. Described as a major contemporary art exhibition, it is held every two years.

Cruz relates that the exhibition and competition give opportunities to artists all over the world to establish connections and to learn from each other’s works. The event was joined by 462 artists from 72 countries.

Cruz admits that he almost did not make it. He found the acceptance email in his junk mail three months after his inquiry.

Prior to application, Cruz was already starting his “Imperishable Seed Series.” He decided to pursue the application because the theme of the Biennale was “Earth: creativity and sustainability,” same idea as his seed series. 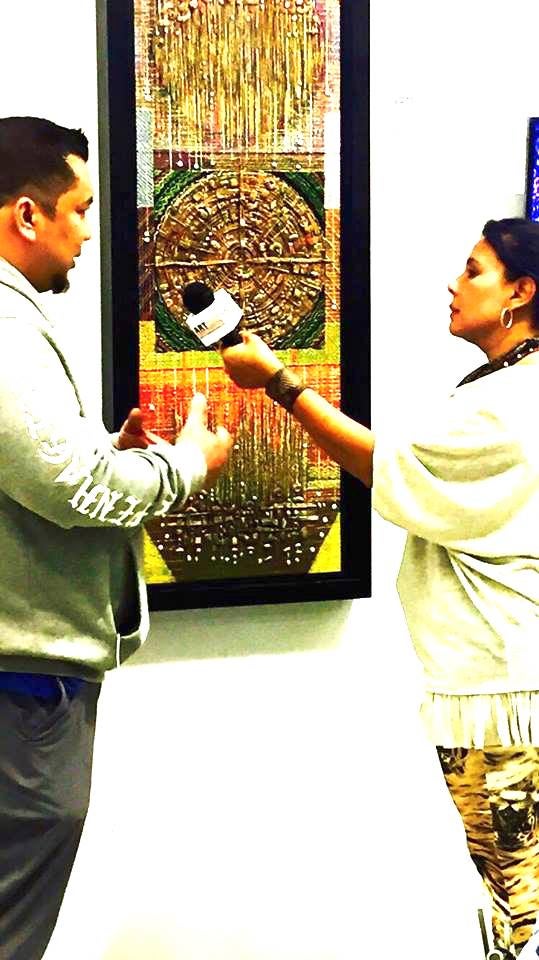 Jun Cruz being interviewed by a reporter during the exhibition. CONTRIBUTED

Cruz is a Kapampangan artist deeply rooted in Mother Earth or Indung Tibuan. His art reflects the agricultural life of his people. He must tanam “plant seeds” and patubu “bring life out of the soil.”

Cruz explains that the Imperishable Seed series he exhibited is a homage to the act of planting, correlating with the physiology of life. It follows his Tanatanaman, his first one man show 20 years ago in Pampanga. Tanatanaman means planting seeds in search of purpose and meaning.

“The shooting spiky structures that characterized my works now represent germinating seeds. I call it biomorphic, which literally means ‘life transformation.’ It represents the physical world and depicts the importance of spirituality and man’s relationship to his Creator,” explains Cruz.

But it was not that simple.

“I experienced so many obstacles both spiritual and physical. I almost gave up. But the Lord did not leave me since day one,” Cruz shares.

Cruz is grateful to his wife, Elaine, for her unwavering support and belief in his art.

The Florence Biennale committee helped the shortlisted participant find sponsors. Many artists were supported by their governments and art patrons.

Behind the art scene

The Philippine delegation had different experiences though, from visa hassles to custom related woes. One participant, Melbourne Aquino, was almost denied a visa despite the invitation from the committee. 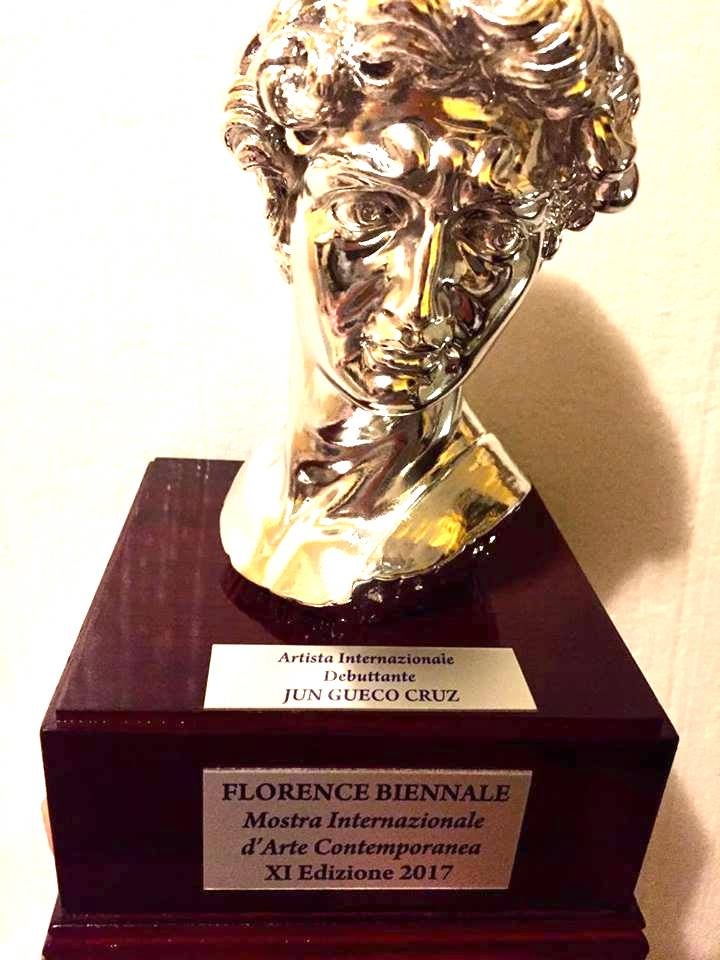 The replica bust of David by Michelangelo was awarded by the Philippine Consulate. CONTRIBUTED

Although Cruz did not experience visa problems, he was only able to exhibit one art work due to costly shipment. Many artists also continued working onsite to avoid the shipping costs.

Although artists could sell their work during the exhibition, they would be taxed. Cruz opted to have his work shipped back to the United States.

“I am thankful to Angeles City (Pampanga) mayor Ed Pamintuan and his wife, Herminia, who sponsored my two-day hotel stay in Florence. The rest were my savings,” Cruz says.

The Philippine Consulate General in Florence as well as the Filipino community warmly welcomed the Filipino artists. The Consulate awarded each of them a replica bust of David by Michelangelo in recognition of their effort to represent the Philippines and promote it in the international exhibition.

“Although I did not win any prizes, I learned a lot from the exhibition and was able to share my talent with the community,” Cruz says.

To the aspiring artists, Cruz says:

“Ask the Lord for direction and purpose. We are entrusted with God-appointed work. He assigns the duty, provides the skills and causes growth. The Creator deserves all of the glory. We are just vessels to achieve God’s plan.”

Cruz was 2016 selected artist for the Linus International Art Galleries texture art exhibit. Presently, he is preparing for the 2018 art exhibit in Amsterdam Whitney Gallery in Chelsea, New York, where he has been asked to exhibit.