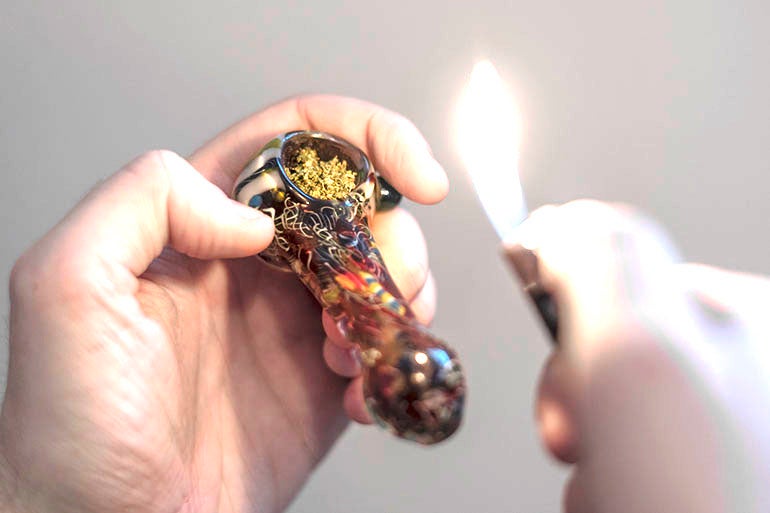 Hand holding a glass pipe packed with weed, with a lighter about to smoke it. Marijuana is now legal in several American states. CA HEALTHLINE

California already has medical marijuana. Now there’s evidence that pot might work as “marital marijuana,” revving up sex drives in both men and women.

The exact nature of the cannabis-coitus connection remains unresolved, but researchers attempted to cut through the haze with a new study published in the November issue of the Journal of Sexual Medicine.

It showed that people who toke up are more likely to get down (and dirty).

It actually doesn’t matter who’s partaking — male or female, single or married, childless and carefree, or busy breeder. Among all demographic and ethnic groups, those who smoke weed reported having more sexual intercourse than those who don’t, the research shows.

“I was surprised,” said Dr. Michael Eisenberg, the study’s senior author and an assistant professor of urology at Stanford University School of Medicine.

The study is based on surveys of more than 50,000 Americans ages 25-45, conducted over more than 10 years by the National Center for Health Statistics.

Before seeing the results, Eisenberg had been telling his patients that getting baked might be a drag on their sex drive or performance. But now he’s much more confident that marijuana isn’t interfering with sexual behavior. And that’s good information these days, especially in California, which already allows medical marijuana and is preparing to go all the way with recreational sales next year.

Last November, California voters approved Proposition 64, the Adult Use of Marijuana Act, making California one of eight states — plus the District of Columbia — to legalize the drug for recreational use. The measure immediately made it legal for adults 21 and over to possess up to 1 ounce, or 28.5 grams, of cannabis, but delayed legal pot sales from licensed retailers until the beginning of 2018.

Eisenberg cautioned against drawing unwarranted conclusions from the study and cited the statistical adage that “correlation does not equal causation.”

“This doesn’t mean that if you want to have more sex, you should start smoking marijuana,” he said. “That’s definitely not what this data supports.”

But Eisenberg said the study could change how he counsels patients who already smoke marijuana. Previously, he’d advised them to quit smoking pot if they were having trouble with libido or sexual performance.

Now he thinks quitting might not be necessary, and that patients can focus on other lifestyle changes to increase libido.

“If somebody is using marijuana to help them for chronic back pain or something like that, there may be other interventions that we can think about targeting, rather than telling them they have to stop, otherwise their sex life is doomed,” he said.

Pot use and sexual activity appear to have a “dose-response relationship.” That means the more you smoke, the more likely you are to have had sex in the past month.

“The daily users, for example, compared to the never-users, reported about 20 more sexual encounters a year. So I think that is a significant difference,” Eisenberg said.

The survey respondents were not asked how much pot they smoked when they smoked. But it did ask about how much sex they had. According to the study, non-users said they had engaged in sexual intercourse between five and six times in the previous month.

But daily pot smokers reported having intercourse about seven times over that same period. The frequency was somewhere in between for people who smoked marijuana less often, on a weekly or monthly basis. They reported having sex more than abstainers, but less than daily users.

“For every group, the more marijuana use that they reported, the more sex they reported as well,” Eisenberg said. “So that … made me think that there could potentially be some biologic explanation here.”

“Obviously I’m not going to tell a couple that doesn’t use marijuana to use it,” she said. But “if they were interested, I would offer the information.”

Richmond said she has seen mixed results among her clients who use marijuana. Some couples tell her that they have more sex when they use pot; others have less.

She said those differences are probably attributable to how much pot someone smokes instead of how often they smoke.

“Too much can lead to lethargy and really checking out, which does not facilitate [emotional] connection at all, and definitely doesn’t encourage sexual activity,” she explained.

The results shed no light on what factors drive the association between pot use and sex, according to Dr. Igor Grant, chair of psychiatry and director of the Center for Medicinal Cannabis Research at the University of California-San Diego.

The simplest explanation might be that the type of person who smokes pot — or is willing to admit it in a survey — also likes sex more. Grant called those people “risk-takers” or “sensation-seekers.”

“Drug use is one type of sensation-seeking behavior, and obviously sex is another,” he said.

Eisenberg said the study also controlled for other risk-taking behaviors, such as cocaine or alcohol.

He suspects marijuana may be stimulating arousal or other neural pathways in the brain. That’s different from Viagra, which works directly on the vascular system to improve blood flow to the penis.

Also, the survey asked only about sex between men and women, so it’s unclear how marijuana affects same-sex encounters.

Still, the results fly in the face of some previous research, such as studies indicating that heavy marijuana use is associated with erectile dysfunction. Plus, research on cigarette smoking shows negative vascular effects that can interfere with male arousal, Eisenberg said.

The results also contradict stereotypes about stoners. Grant summed it up as “people just, you know, not feeling like having sex if they’re stoned all the time.”

Richmond, the sex therapist, agreed that those stereotypes exist, so this study could be reassuring to people who enjoy marijuana and also enjoy sex. At the very least, the study shows smoking weed doesn’t appear to decrease sexual activity.

“Individuals and couples look for additional ways to create novelty in the relationship and have fun, and that’s now a legal and accessible way to do it,” she said.

This story is part of a partnership that includes KQED, NPR and Kaiser Health News, an editorially independent program of the Kaiser Family Foundation.